“This one has a spectacular migration for a small bird” 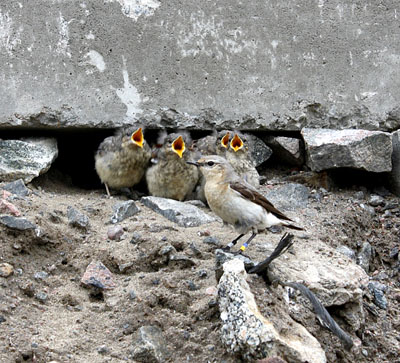 A banded female northern wheatear and four young birds taking shelter by a concrete block in Iqaluit. Chances are these birds are now spending the winter in western Africa. (PHOTO COURTESY OF DAVID HUSSELL)

An Iqaluit-based bird that weighs about as much as two teaspoons of sugar — the northern wheatear — is now soaking up the sun in western Africa.

How it gets there is still somewhat of a mystery. But bird buff David Hussell, who holds a PhD in ornithology, believes he’s getting to the bottom of it.

Hussell first travelled to Iqaluit in 1959 after emigrating to Canada from Winchester, England, in 1957.

“As soon as I got a holiday I wanted to go to the Arctic,” Hussell told Nunatsiaq News from his home in Simcoe, Ont.

That’s when Hussell began to study and photograph birds like snow buntings and other songbirds.

Fast forward about fifty years, and Hussell is continuing with what he says is his calling — studying birds like the northern wheatear.

“As far as migrants go, this one has a spectacular migration for a small bird,” Hussell said.

The northern wheatear that’s found breeding around Iqaluit only weighs, on average, 25 grams, but travels about 7,500 kilometres from Iqaluit to western Africa..

Only a few from the eastern Arctic’s population have been recovered with the colourful geolocators still intact. The first was found in Iceland in 2009 after being tagged in 2007.

“It looks like it did it in one flight. All wheatears might not do the same thing. But it’s a very long flight for a songbird, and it’s partly why we started studying this bird anyway,” Hussell said.

That famous bird now sits in the collection of the Icelandic Institute of Natural History in Reykjavik.

Since then, two others from Iqaluit have been captured and more information has come in. But there are still many missing clues to the northern wheatear’s migration.

Unknowns include: which exact route it takes, mortality rate during migration, the exact location in western Africa they migrate to, and how high they fly above sea level.

The little information Hussell has suggests the bird migrates to Mauritania.

Biologists in Senegal have sighted the bird, and others have seen the bird in the Canary Islands.

“I’ve been working on it now for seven years. You put snippets of information [together],” Hussell said.

What is known, however, is that Hussell will visit Iqaluit in 2014—his third year in a row—to try to answer these questions.

“I came up again in 2012 and this year as well. We basically just continued to look for birds that were banded,” Hussell said.

Hussell, a retiree, is supported by Bird Studies Canada and teams up with other scientists tracking the bird in other parts of the Arctic, like Alaska. On his last trip, he also brought his family up for a vacation.

The cost of travelling to Iqaluit comes “mostly out of my own pocket,” he said, with some subsidies from Bird Studies Canada.

But his migration to the North is worth it.

“I didn’t want to play golf or anything. And I’m not really all that keen on ecotourism either,” Hussell said

“For bird watchers, if they want to see a wheatear, then Iqaluit is the place to do it.”

The birds are believed to remain in Africa from November to March, and return to Iqaluit in May.