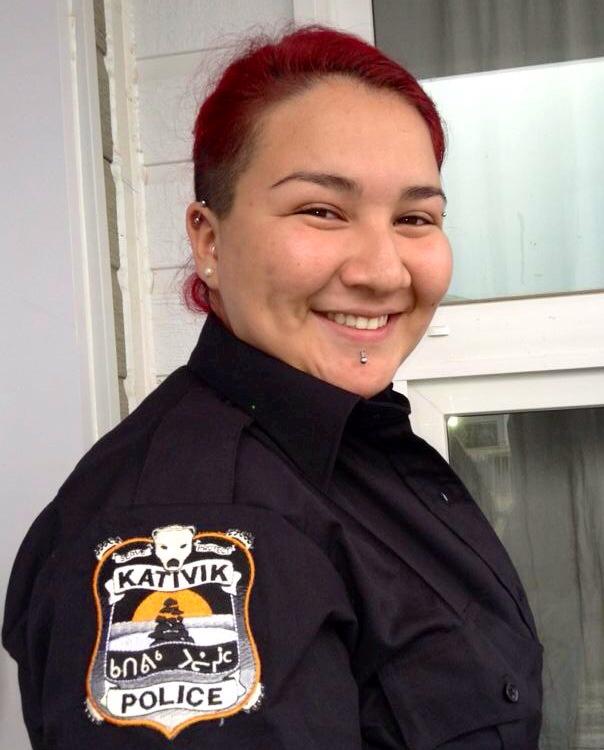 Maryam Ilgün on her first day at work with the Kativik Regional Police Force in June 2013. (HANDOUT PHOTO)

Most teenagers aren’t prepared to pick a career as soon as they leave high school.

But Maryam İlgün had barely graduated in Quaqtaq last spring when she picked up the phone and called the Kativik Regional Police Force looking for work.

“I always wanted to be a cop since I was a little kid,” she said, pointing to both an uncle and a cousin who worked as police officers in Nunavik.

“I just thought they were cool,” she laughs.

The 19-year-old with bright red dyed hair was quickly hired to work at Quaqtaq’s police station, mostly doing paperwork and learning about the job from the three other KRPF officers posted in the community.

She occasionally got called out with officers, mostly to respond to complaints about residents being drink and disorderly.

“People were asking me to come rather than other cops,” İlgün said of local calls into the station. “They were already preferring me to other cops.”

That’s no surprise — the KRPF has been working for years to increase the number of Inuit officers on the force, to improve both the communication and comfort of Nunavimmiut who come into contact with local police.

Currently, there are only two Inuit officers working for the force of more than 60.

The KRPF quickly offered to send İlgün south for police training in Nicolet, Quebec, where she is the only Inuk in a classroom full of Cree students.

“It’s fun,” she says, although she admits to long days.

İlgün’s course is offered in English, and focused on policing in Aboriginal communities.

It’s also her first time living in a predominantly French-speaking community, where staff from the local Tim Hortons are constantly telling İlgün and her Cree friends to speak French.

Although she understands spoken French, she says that can be tough, but adds that most of the people she’s met in Nicolet have been friendly.

When asked how she feels about being a female police officer in a field still dominated by men, İlgün shrugs; it’s not something that ever really occurred to her.

She may be the only Inuk in her program, but the majority of students are women.

“I haven’t seen a difference being a woman,” İlgün said. “Maybe when you’re searching someone — some women don’t feel comfortable if a man searches them.”

What seems more important to İlgün is being able to police and serve her own community.

“I don’t know why there aren’t more Inuit in the KRPF,” İlgün said, “I think there should be more.”

“But since I’ve joined, people are telling me ‘I should join too and get on the force.’”

Another friend in Quaqtaq who is still in high school has already told İlgün “don’t quit before I come, I want to be your partner.”

“That feels good,” she said.

İlgün knows that the hard work she’s putting in at college won’t let up once she’s on the force again — crime rates in Nunavik remain high, while the region’s police force has faced three violent stand-offs since the spring.

İlgün happened to join the force at a time when many other officers were handing in their resignations, in the months after KRPF officer Steve Déry was killed on duty in Kuujjuaq earlier this year.

But İlgün says she feels prepared for the job — just last week, her instructors in Nicolet were teaching her about tactical intervention and how to handle potentially violent situations.

“Anything can happen,” İlgün says.

But İlgün knows that by mid-December, she’ll be back at home in Quaqtaq, trained as a special constable, with a job waiting for her.

“I’m going to start right away,” she said, “but hopefully, I don’t have to work Christmas day.”