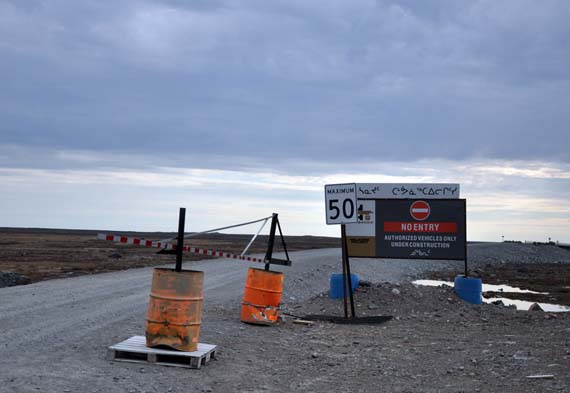 Signage marks the beginning of Agnico Eagle Mine’s 24-kilometre road that links the community of Rankin Inlet to its Meliadine gold mine project site. (PHOTO BY SARAH ROGERS)

While Agnico Eagle Mines has made efforts to incorporate Inuit Qaujimajatuqangit in the research and development of its Meliadine gold project, the Kivalliq Inuit Association has asked the company to consider using more traditional knowledge as the company seeks approval to open its second gold mine in Nunavut.

The KIA is one of a handful of organizations that have submitted comments this month in response to Meliadine’s final environmental impact statement (FEIS), which AEM released this past spring.

In a report prepared by Brenda Parlee, an associate professor in the University of Alberta’s department of Resource Economics and Environmental Sociology, the KIA suggests the mining company could benefit from traditional knowledge to identify what parts of the ecosystem are most valued by Inuit, and to better analyze past, current and future trends in the region.

“Inuit communities of the Kivalliq region have many generations of accumulated observations and consequent insights about the local study area and the regional study area,” reads KIA’s submission.

“In addition, Inuit land users, elders and youth have many relevant skills and capacities that can be key to successful long term monitoring.”

But, it adds, “there continues to be insufficient use of IQ in the EIS to substantiate the proponent’s claim that [traditional knowledge] has been used to determine the potential environmental, socio-economic and health impacts of the project as required through the assessment process,” KIA said.

The KIA found it useful to see “IQ flags” added in the margins of the Meliadine final EIS to help identify where Agnico Eagle felt traditional knowledge had been incorporated.

But there is “little to no consideration” on how IQ on climate change has influenced Agnico Eagle’s analysis of impacts, project plans, management and monitoring, KIA said.

Some other observations made by KIA in its submission include:

• the section in its final EIS on polar bears omits some key IQ literature that is published by the Nunavut Wildlife Management Board and in academic journals;

• “some relevant IQ is available on many key issues such as caribou population change and distribution, marine wildlife habitat, populations, behaviour and climate change,” the KIA submission says. “This body of existing documented sources of IQ was rarely referenced by the proponent”; and,

• there continues to be “very poor” integration of IQ in the sections on marine mammals: IQ was not considered in describing the mammals’ habitat, migration routes, reproduction or behaviour.

Agnico Eagle, which already runs Nunavut’s only operational mine — a gold operation at Meadowbank about 80 kilometres north of Baker Lake — outlines in the final EIS what it sees as the impacts of gold production on the vegetation, air quality, sea and land animals, and also nearby people.

Among those animals — caribou: the Meliadine mine will be located within the range of the Qamanirjuaq caribou herd, a prime food source for Kivallirmiut.

According to the Beverly and Qamanirjuaq Caribou Management Board, the herd comprised 348,000 animals in 2008.

Agnico Eagle says in its final EIS that, according to Government of Nunavut studies, some caribou have moved through or near the mine site area in recent years, including during the post-calving and late summer seasons.

But as with many disturbances, the report says the effects are “expected to be reversible in the long-term.”

The company predicts habitat loss and fragmentation, and sensory disturbances will have an impact on bird, water fowl and raptor populations, but again, “all effects are expected to be reversible in the long-term,” it says.

While the company predicts no significant adverse impact on fish, it does suspect there will be an impact on marine wildlife in relation to “habitat loss, habitat quality, sensory disturbance, spills, and collisions with ships from the project.”

The KIA’s submission, along with those of the Governments of Nunavut, Northwest Territories and Canada, will be presented at the final hearings on the Meliadine project, to be hosted by the Nunavut Impact Review Board in Rankin Inlet Aug. 21 to Aug. 27.

The hearings will include a visit to the mine site Aug. 23.

Agnico Eagle officials expect a response from the NIRB by the end of 2014, which would go to the federal government for final approval.

From there, Meliadine could have its project certificate to move forward by early 2015.