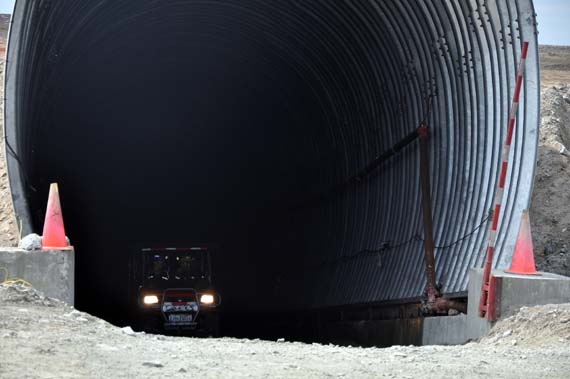 Workers emerge from the ramp that leads to Meliadine’s underground pit in June 2014. (PHOTO BY SARAH ROGERS)

Agnico Eagle’s Meliadine gold project now has the go-ahead from the Nunavut Impact Review Board to operate what promises to become the territory’s second gold mine.

The review board issued Meliadine its project certificate Feb. 26, subject to 127 terms and conditions.

Most of those require that Agnico Eagle Mines put in place monitoring programs to keep tabs on the mine’s socio-economic and environmental impacts.

The NIRB had already given the project the green light this past October, sending its recommendation to the Department of Aboriginal Affairs and Northern Development for its final stamp of approval.

This past January, AAND Minister Bernard Valcourt accepted the terms and conditions that the NIRB recommended. Those requirements then became part of the project certificate, following a workshop held Feb. 23 and Feb. 24.

To supply the operation, Agnico Eagle would use a port just south of Rankin Inlet located at a place called Itivia.

Another all-weather access road connects the mine site to the Kivalliq community, and was opened for public use in 2014.

Agnico Eagle has said the mine could produce 400,000 ounces of gold per year over a 3-year lifespan, and hopes to run the mine from about 2018 to 2030, and possibly longer.

However, the company has yet to make a final decision to build a mine there.

Once it’s in operation, Meliadine would employ about 700 people. Agnico Eagle said it invested in 13,000 hours of training for Inuit beneficiaries last year, in the hope that many of those workers would come from Rankin Inlet and nearby communities

To monitor the project’s 127 terms and conditions, the NIRB will now appoint a monitoring officer, who will serve as its lead contact with the company and any other agencies involved.

But before the NIRB can begin its project monitoring program, the board must wait for other regulatory authorizations like land use permits and a water license from the Nunavut Water Board.

The company must also conclude an Inuit impact and benefit agreement with the Kivalliq Inuit Association.

You can find a PDF of the project certificate here.