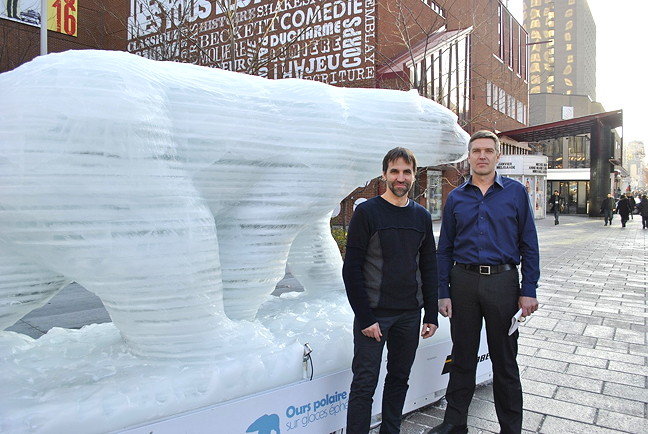 Steven Guilbeault, director of the Quebec environmental group Équiterre, and Paul Crowley, director of the World Wildlife Federation-Canada’s Arctic program, introduced a piece of the Arctic to downtown Montreal this month. Ice sculptors Peter Ittukallak of Puvirnituq and Julien Doré hewed the work out of a block of ice just outside Équiterre’s offices on Ste-Catherine Street in Montreal. (PHOTO BY PETER VARGA)

MONTREAL — A piece of the Arctic is paying a visit to downtown Montreal this fall, in the form of a six-tonne ice sculpture of a polar bear.

The display is part of an effort by the Quebec environmental group Équiterre and the World Wildlife Fund to raise awareness about global warming and its effects on the Canadian Arctic.

“We’re trying to reach as broad an audience as possible,” said Steven Guilbeault, senior director of Équiterre. “Ultimately, we’re hoping people will put pressure on our government to take action.”

Sculptors Peter Boy Ittukallak of Puvirnituq and Julien Doré of Quebec’s Laurentian region hewed the life-sized bear out of a block of ice just outside Équiterre’s offices on Ste. Catherine St. in Montreal.

Completed Nov. 24, the carving contains a 400-kilogram polar bear skeleton of bronze which will emerge as the ice melts.

The sculpture is part of the “Polar Bears on Thin Ice” display, which includes open-air screenings of a creative video on the impacts of global warming on Arctic wildlife and on the livelihood of Northerners, which runs nightly until Dec. 6 near Place des Arts.

Équiterre and WWF-Canada put on similar polar bear displays in major Canadian cities in 2013 and 2010.

The non-profit groups timed this year’s event to unfold a few days before the United Nations conference on climate change — COP 21 — is set to take place in Paris from Nov. 30 to Dec. 11.

Canada will join 195 other countries at the two-week conference in an effort to reach an agreement to curb the world’s fossil fuel consumption which generates global-warming greenhouse gases.

Their goal: to ensure global temperatures rise by less than two degrees Celsius in this century.

The effects of global warming are particularly obvious in the Arctic where temperatures are rising at twice the global average, according to Équiterre.

Greenhouse gas emissions are causing the North polar sea ice to recede every year, Guilbeault said. Ever-increasing global temperatures are melting the sea ice at alarming rates which will cause sea levels to rise and accelerate climate change. “Polar Bears on Thin Ice” illustrates the problem.

“We’re trying to generate even more interest [in global warming] by organizing events like this,” Guilbeault said.

“It’s all trying to get the message down of what’s happening,” said Paul Crowley, director of WWF-Canada’s Arctic program. “This is a good way to remind people that impacts up north don’t start up north. They start in other places — they start here,” he said from Montreal.

The polar bear sculpture is on display at the Centre for Sustainable Development, 50 Ste-Catherine St. W. in Montreal, until Dec. 12.

The accompanying half-hour, open-air video screens daily at 5:30 p.m. until Dec. 6 on the wall of Université du Québec à Montréal’s President Kennedy pavilion and at the St-Laurent metro station.