“When you appreciate a culture, it’s a sign of respect” 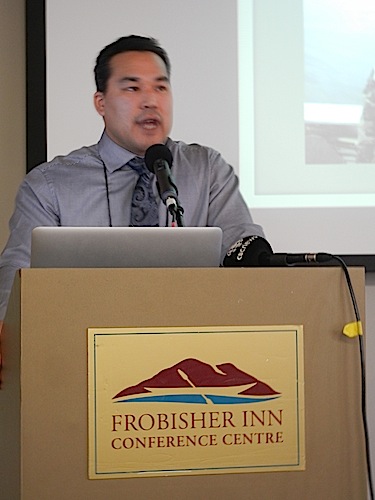 People who come to Nunavut from the South for work, need to have a better understanding of Inuit, Pujjuut Kusugak said April 9 during a presentation at the Nunavut Mining Symposium in Iqaluit.

Kusugak, who served as Rankin Inlet’s mayor for a two-year term, worked for the Kivalliq Inuit Association and then briefly taught high school, has now started a 51 per cent Inuit-owned consulting company in his home town.

“We want to inform companies what it’s like to work in the North,” he said.

That’s because “people need to understand what they’re getting into, Kusugak said.

“When you appreciate a culture, it’s a sign of respect,” he added.

Agnico-Eagle Mines Ltd. understands the value of “cross-cultural” training, which includes knowing more about Inuit history, such as colonization, he said — “those are still real issues right now,” Kusugak said.

Agnico-Eagle acquired the Meliadine property, located about 25 kilometres north of Rankin Inlet, from Comaplex Minerals Corp. in July 2010 and now hopes to turn the project into a producing gold mine by 2014 or 2015.

And people in Rankin Inlet are ready for the long-awaited benefits the mine would bring to their community, something Kusugak has maintained since the announcement of the proposed gold mine.

He called for mining companies and communities to work together on cultural understanding involving language and cultural struggles.

“Inuit will not just agree to have land ‘exploited’ or ‘used’ for development,” Kusugak said.

Because of deep attachments to the land for hunting and other activities, “Inuit aren’t going to just give you that land,” he said.

“If you’re coming from a place like Toronto, do you have the same understanding of your backyard [as people in the Arctic]?,” Kusugak asked.

Because the answer is no, Kusugak wants to make sure he has input into what mining companies are doing in Nunavut, and how these companies relate to communities.

As for “Arctic experts,” Kusugak said he doesn’t approve of these so-called experts.

“To put it bluntly, these ‘experts’… most of them are not Inuit,” he said.

For Kusugak, being Inuk is “an attitude, it’s a culture, it’s everything you believe is in a people.”

If someone is going to talk about Inuit, they should understand Inuit, he said.

“This allows Inuit to build up pride with who they are,” Kusugak said at the end of his presentation on his new consulting business, co-owned with a non-Inuit partner.

“We have to help other Inuit understand who they are and what they are capable of,” Kusugak said.