Sabina, Xstrata mine projects have “increased development activity in the region and reignited demand for BIP[A]R” 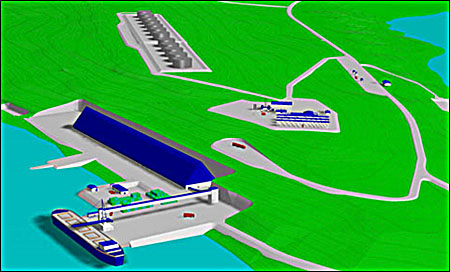 Sabina Gold and Silver Corp. says it’s ready to put the Bathurst Inlet road and port project back into the regulatory process. This image shows what the huge project would look like. (FILE IMAGE)

Like a cat with nine lives, the Bathurst Road and Port project in Nunavut’s Kitikmeot region has landed back on its feet.

Sabina Gold and Silver said March 30 that it plans on reviving the port and road project, which would provide easy access to its Back River gold mine, with up to six million ounces of gold and to Xstrata Zinc Canada’s planned silver-zinc mine at Hackett River.

Sabina said March 30 that it had bought the BIP[A]R project from the Kitikmeot Corp. and other Inuit promoters in late 2011, a move not previously announced to the public.

Now Sabina says it’s looking, along with Xstrata, at building a deep water port in Bathurst Inlet (approximately 70 kilometres to the north of Sabina’s Back River project) and an all weather road connecting the port to existing ice roads which service the Ekati and Diavik mines from Yellowknife.

The port facility, 35 km to the south of the community of Bathurst Inlet, would include the construction of a dock, 18 large fuel storage tanks, the 211-km. road to Conwoyto Lake, a 1,200-metre airstrip and two camps for about 200 workers.

Its cost was estimated at $270 million several years ago.

When Zinifex, the former owners of the Izok and High Lake lead-zinc project, bowed out of BIPAR four years ago, the project’s promoters decided to stop the permitting process, although they had already submitted a draft environmental impact statement for the project to the Nunavut Impact Review Board.

That decision came as a blow to Sabina.

But last year Sabina told the NIRB that it was assessing its options with the project, the March 30 news release said.

And the NIRB granted Sabina permission to file an update on its plans for BIPAR at the end of this month — although this correspondence does not yet appear on the NIRB website.

Sabina wants to promote the port and road project because the sale of its Hackett River project to Xstrata has “increased development activity in the region and reignited demand for BIP[A]R,” Sabina said.

In 2011 Sabina announced the completion of the sale of Hackett River and other claims to Xstrata.

“Although not critical to the development of Back River, [BIPAR] presents opportunities for synergies and potential economic benefits to Sabina,” the company said March 30.

Now Sabina and Xstrata have agreed “to work together to push the project forward and will look to engage local communities and businesses and explore opportunities for direct Inuit participation in BIP[A]R.” the company said.

A joint Xstrata-Sabina submission outlining “high level plans for the project going forward” was to go to the NIRB by the end of March — that submission is also not yet posted on the NIRB website.

The company reported a net loss of $12.6 million, but it finished the year with about $160 million in cash and no debt.

The results of its preliminary economic assessment on the Back River project are expected to be announced in April.

“We are very much looking forward to what 2012 brings,” said Rob Pease, Sabina’s president and chief executive office. “Over the past three years, we, 2012 is the largest planned Nunavut work program in the company’s history and we look forward to the beginning of drill results in the near future.”

Sabina and the KIA have already said they’ll team up on the mine project. They announced last October that they had entered into a Memorandum of Understanding to create a development trust.

The MOU sees Sabina paying about $1.4 million to an existing KIA fund that supports development and community projects in the Kitikmeot.

Sabina and the KIA also agreed that it would be mutually beneficial to enter into long-term Inuit land use agreements.

In a previous deal signed with the Nunavut Resources Corp., Sabina said it would give the group up to $2 million as “seed funding” to develop a work plan for joint infrastructure projects in the Kitikmeot, such as BIPAR.