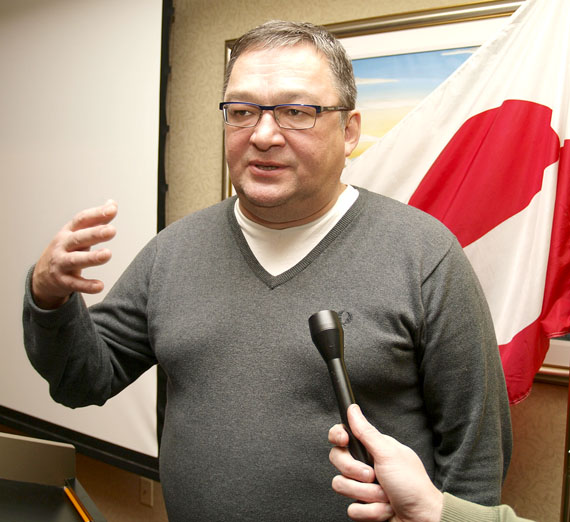 The pro-mining stance of the government of Greenland Premier Kuupik Kleist, seen here in 2011 in Iqaluit, is among the key issues in the March 12 Greenland election. (FILE PHOTO)

In less than one month, voters in Greenland will head to the polls to elect new leaders for its Home Rule government.

A recent opinion poll suggest the leftist, pro-independence IA party, headed by Premier Kuupik Kleist, would win more than 40 per cent of the vote. That’s enough to keep the IA in power.

However, other polls show the social democratic Siumut Party, which, until 2009, led all governments since the start of Home Rule in 1979, close behind or even ahead of the IA.

Among the key issues now being debated during the current election campaign: uranium mining and a new act that makes it easier to open large mines.

That act says mining projects valued at more than $900,000 may use imported labor and contractors during the development phase of the projects and pay them less than local hires.

If elected, the Siumut party vows to repeal that legislation, which was passed in the autumn of 2012 after heated debate in Greenland’s parliament.

By 2015, the U.K.-based, Chinese-backed London Mining Inc. wants to see the Isua mine, about 150 kilometres northeast of Nuuk, in operation.

Plans call for the Isua mine to ship out 15 million tonnes of high grade iron concentrate a year over 15 years, with as many 3,000 workers needed to build the $2.3 billion mine.

Nine of every 10 of these workers would be imported to Greenland.

The Epoch Times says a planned smelting plant in Maniitsoq would require 5,000 workers for its startup phase, the majority of whom will arrive from China.

Meanwhile, the European Union has urged Greenland to restrict Chinese development of projects.

And Paula Briscoe, an analyst at the Council on Foreign Relations, says in recent paper that “China’s increased influence in Greenland could help buy Beijing a proxy voice in Arctic matters.”

“If Greenland, lured by the promise of investments and earlier autonomy from Denmark, allows itself to be overwhelmed by foreign companies, then China could use its influence to Beijing’s advantage.”

Kleist has said he does not view thousands of Chinese workers in the country as a threat.

While the Greenland government has control over uranium mining rights in the country, Greenland must ask Denmark for permission before it can move ahead with uranium mining and the mining of the rare earths at Kvanefjeld.

News reports suggest that a majority of members of the Danish parliament seem ready to support the extraction and export of uranium from Greenland.

However, Kleist has also said his IA party favours a public debate in Greenland first. The Greenland government is also waiting for a report on the health and evironmental effects of uranium mining.