NWMB recommends TAH increase from 24 to 38; GN wanted no increase 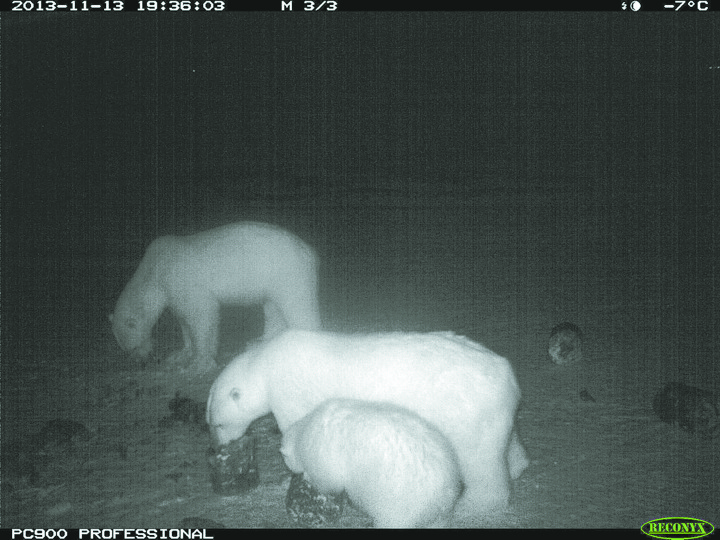 This night photo shows polar bears outside of Arviat clawing at frozen seal meat. The local wildlife office put the food outside the hamlet limits in November 2013 to keep the bears at bay as they migrate north. (PHOTO COURTESY OF ARVIAT WILDLIFE OFFICE) 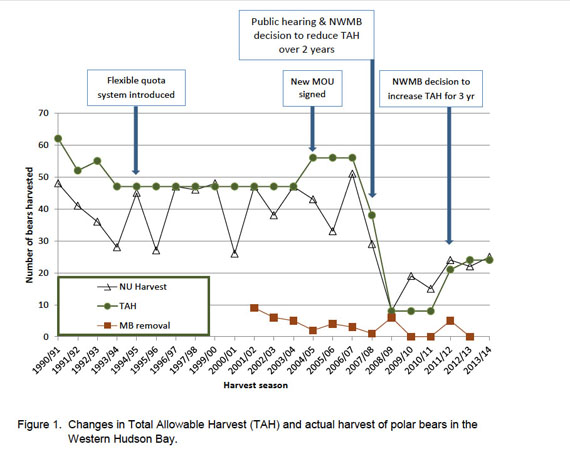 Follow the bouncing polar bear quota. This graph shows the abrupt changes to the total allowable harvest for the western Hudson Bay polar bear sub-population that occurred after 2005. The Nunavut Wildlife Management Board now recommends a quota of 38, but the Government of Nunavut has yet to make a decision. (IMAGE EXTRACTED FROM GN SUBMISSION TO THE NWMB)

Joe Savikataaq, the MLA for Arviat South, wants to know if Johnny Mike, the Nunavut environment minister, will say yes to a recommendation from the Nunavut Wildlife Management Board to raise the quota for the controversial western Hudson Bay polar bear sub-population from 24 to 38.

And Savikataaq suggested that Mike may be dragging his feet on the issue because the Government of Nunavut disagrees with the NWMB recommendation, which would make the quota 14 bears higher than what the GN wanted last year.

But Mike said he’s not yet ready to give his answer.

“I’m not agreeing with it, I’m not disagreeing with it. I just want to carefully consider it,” Mike said Oct. 21 in the legislative assembly, in response to questions from Savikataaq.

The NWMB’s recommendations to the minister — under the Nunavut Land Claims Agreement — are supposed to be confidential.

But in this case, the NWMB’s recommendation isn’t much of a secret. And Mike confirmed the number in response to questions from Savikataaq.

More than 10 years ago, the western Hudson Bay polar bear issue became a battleground for Inuit hunters, researchers and governments, who engaged in bitter disputes with each other about whether climate change was threatening to reduce the region’s polar bear population.

And Inuit in the region — where communities like Arviat are overrun with migrating polar bears — accused some researchers of ignoring Inuit traditional knowledge.

The dispute also pitted the Canadian Wildlife Service against the GN, who each produced competing studies.

Much of that bickering has settled down, especially after the Canadian Wildlife Service, an agency of Environment Canada, began accepting the validity of Inuit Qaujimajatuqangit.

But Kivalliq region hunters in Arviat, Whale Cove, Rankin Inlet, Chesterfield Inlet and Baker Lake have waited a long time for a decision on the region’s polar bear quota.

The NWMB held a public hearing on the issue nearly a year ago, on Dec. 2 and Dec. 3 in Rankin Inlet.

At that meeting, the GN said the total allowable harvest should remain at 24 until the NWMB can review that number by the 2017-18 hunting season.

But Kivalliq hunters want more, and the NWMB appears to agree with them.

Its new proposed quota of 38 would not, however, restore the total allowable harvest to where the quota stood in 2005, when the GN raised it to 56 from 47, a position from which the territorial government backtracked rapidly in 2007.