Position has sat vacant since June 2016 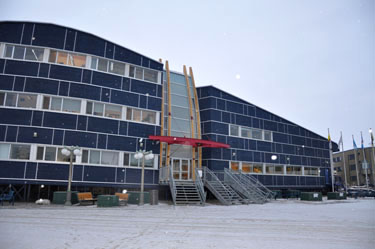 The Legislative Assembly of Nunavut has yet to find a person to fill the vacant position of Languages Commissioner of Nunavut, but they’re not giving up. Starting this week, they will advertise the job for a third time, with a closing date of March 24, 2017. (FILE PHOTO)

The Nunavut legislature is still unable to find a suitable candidate for the position of Languages Commissioner of Nunavut and will re-advertise the job starting this week, a legislative assembly spokesperson told Nunatsiaq News this week.

MLAs have been seeking a new languages commissioner for the past seven months. The former commissioner, Sandra Inutiq, resigned from the job in June 2016, citing health reasons.

To that end, the legislative assembly’s internal governing body, the Management and Services Board, posted an advertisement that month, with a closing date of Aug. 5, 2016.

But those efforts failed to produce a qualified person willing to accept an offer, as did a second candidate search.

“This will be the third time that we have advertised for the position and hopefully this third time we will be successful in hiring a new Languages Commissioner,” the spokesperson said.

An advertisement for the job will appear in newspapers between Feb. 3 and March 17, with a closing date of March 24, 2017.

The languages commissioner must follow guidelines set by the Management and Services Board of the assembly and is responsible for supervising six employees, within a budget that is set by the assembly, a 12-page “position profile” attached to the job advertisement says.

The languages commissioner reports directory to the legislative assembly, not the Government of Nunavut, but employees of the office are considered to be civil servants.

They’re also not eligible for membership in a union.

And the assembly describes the commissioner’s role as that of a watchdog, under a mandate set out in the Official Languages Act.

“The Languages Commissioner of Nunavut functions as an ombudsperson, advocate, advisor and monitor with respect to official language rights, services and obligations in Nunavut,” the “position profile” says.

The qualifications for the job include the following:

• fluency in the Inuit language and either English or French;

• proven experience as an advocate for language rights;

• knowledge of the Canadian parliamentary system of government, Nunavut’s non-partisan system, and knowledge of national trends in official languages legislation; and,

Academic qualifications are only part of what the legislative assembly is looking for.

“In addition to the formal educational and professional certifications required for the role, the Languages Commissioner must have the proven ability to apply a balanced, common sense approach to carrying out the duties of the position, while exercising sound judgment and demonstrating fairness, integrity and tolerance,” the position profile says.

If you’re interested in applying, you can send an email to submissions@assembly.nu.ca and or download copies of the invitation for applications here.

About a month prior to her resignation, Inutiq had released a report on the Qikiqtani General Hospital that found the hospital offered poor services to Inuktitut and French speaking patients.

The report, which was the result of a lengthy investigation that the Office of the Languages Commissioner of Nunavut had started in 2012, found the hospital had no language policy. The report was completed in October 2015, but it’s not clear why it was not released until May 2016.

In the QGH language report, Inutiq’s office said the GN took many months to respond to requests for documents related to the investigation that the language commissioner’s office had made.

“Many documents of primary importance to conducting the investigation were not released by the deputy minister’s office. It took thirteen months after the first letter issued by our office to obtain certain files required for the investigation,” the report said.

Inutiq resigned from the languages commissioner’s position about a month later.