MMG forges ahead with Izok zinc-copper mine proposal 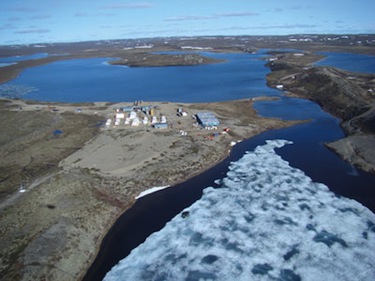 Izok Lake may soon be at the hub of a two-mine, zinc-copper complex in Nunavut’s Kitikmeot region which would include a 350-kilometre all-weather road and a new port at Grays Bay. (PHOTO COURTESY OF MMG)

Nunavut’s Kitikmeot region may soon become home to a major mining project — not the once promising Hope Bay gold mine project near Cambridge Bay — but two major zinc and copper mines.

The Chinese-controlled Mineral and Metals Group announced Sept. 4 that it plans to submit its Izok Corridor Project proposal to the Nunavut Impact Review Board and other authorizing agencies to start the environmental assessment and regulatory review process.

“We have already started to inform and engage communities in the Kitikmeot region of Nunavut and will complete another full year of environmental baseline data collection,” said Michael Nossal, MMG’s executive general manager of business development. “The Izok Corridor Project is expected to provide a number of economic benefits to Nunavut, including the creation of employment, business opportunities, skills development and the payment of taxes to the federal, territorial and Inuit governments.”

MMG’s proposal sets out the preliminary mining and environmental plans for the Izok corridor project based on MMG’s 2011 pre-feasibility study.

The proposed Izok mine would include a two-million-tonne per year concentrator, which would also process the ore from the High Lake mine.

As for the proposed transportation route, it will likely be a 350-kilometre all-weather road to connect the Izok mine to a new port at Grays Bay with the capacity to ship 650,000 tonnes of concentrate per year.

The road will head east until it hits the company’s Gondor property, then turn north just past the Lupin mine, through the Jericho mine and High Lake, the second zinc-copper mine MMG proposes building.

From High Lake, the road will continue on to Grays Bay on Coronation Gulf, which lies east of Kugluktuk and west of Bathurst Inlet.

At Grays Bay, MMG will build a port that for three months of the year will ship ore in two directions through both ends of the Northwest Passage.

Five shipments would head eastwards and, on their return voyage, head west toward the Pacific.

MMG also has approximately 2,000 sq. km. of exploration properties including the High Lake East, Gondor and Hood projects where exploration programs are ongoing.

“The Izok Corridor Project is an important component of MMG’s zinc strategy as a number of major mines, including our own 500,000 tonne per annum century mine, wind down production over the next five years,” Nossal said in a Sept. 4 news release. “With global zinc supply expected to decline by up to 1.8 million tonnes over the next five years, the Izok Corridor Project represents an opportunity to meet medium- to long-term demand requirements for zinc-based products by industrial, commercial and residential sectors worldwide.”

That $50-million feasibility study is expected to take 18 to 24 months to complete.

Nossal said the project includes “a strong commitment to sustainability.”

“MMG is committed to responsible and sustainable development, and our focus remains on open relationships with our local communities and on minimizing potential impacts to the environment,” said Nossal.

Minmetals Resources, MMG’s parent, a global resources company which explores, develops and mines base metal deposits around the world, is owned 75 per cent by the Chinese government, although MMG is headquartered in Melbourne, Australia. Twenty-five per cent of the company’s shares are listed on the Hong Kong Stock Exchange.

It’s one of the world’s largest producers of zinc and also produces significant amounts of copper, lead, gold and silver.

MMG currently owns and operates the Century, Golden Grove and Rosebery mines in Australia, the Kinsevere mine in the Democratic Republic of Congo and the LXML Sepon mine in Laos.

The Izok Lake site was discovered in the late 1950s by geologists working for Texas Gulf Inc., who followed a trail of zinc sulphide boulders scattered across the land tens of thousands of years ago by receding glaciers.

They tracked that boulder trail back to Izok Lake.

The Izok Lake deposit was believed to be a sure thing in the early 1990s when one of its many owners, Metall Mining Corp., tried to move it into production.

Metall’s plans called for a $350-million open-pit mine at Izok Lake, and a $50 million deep-sea port on Coronation Gulf connected to the mine by a road.

But the project tanked in 1992 when the federal government refused to build the road and port for them and world zinc prices sank to historic lows.

Metall mothballed Izok Lake and eventually sold it to Inmet Mining Corp., who sat on the project but did little to develop it.

The on-again, off-again property passed through the hands of many owners, none of whom ever figured out how to economically mine and transport the region’s huge stores of zinc, copper and lead.

That’s because Izok Lake lies 350 km. from the ocean, just north of the Nunavut-Northwest Territories border, a location that demands an expensive all-weather road and port, such as those now proposed by MMG.