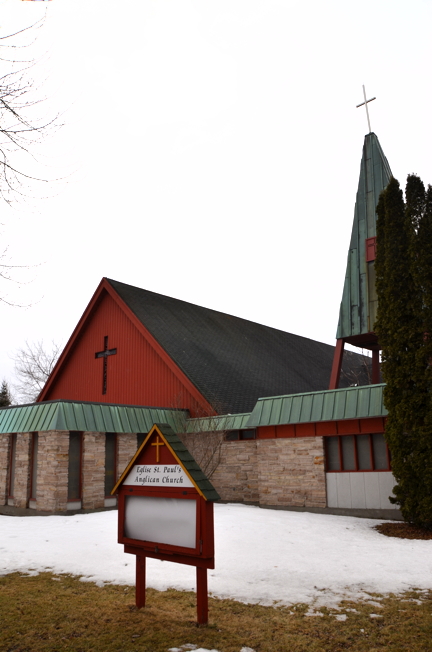 St. Paul’s Anglican Church in Montreal’s west Island sat unused for two years until the Bishop of Montreal turned it over to an Inuit congregation in early 2015. (PHOTO BY DAVID MURPHY) 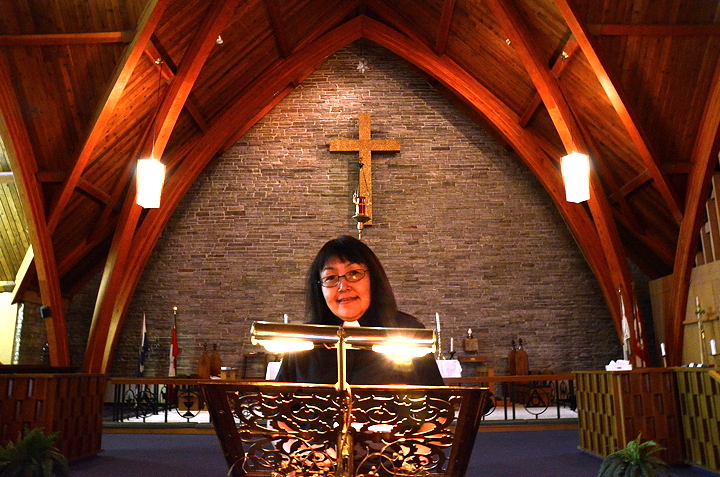 MONTREAL — Rev. Annie Ittoshat stops about every five minutes and gazes up at the cathedral ceiling of St. Paul’s Anglican Church in Montreal.

“I mean, just look at this,” Ittoshat says, craning her neck at the church’s stained glass windows and the massive cross overlooking the church’s sanctuary.

For the past three years, the church has been quietly collecting dust. In Lachine, attendance dwindled, with St. Paul’s closing its doors in 2012.

But the Bishop of Montreal, Barry Clarke, who lived and preached there for more than a decade, was always reluctant to sell the largest church in Montreal’s West Island.

“I never felt right selling the property,” Bishop Clarke told Nunatsiaq News. “I thought there was another use for it.”

There was. And a few months ago, he figured it out.

In late January, Bishop Clarke made history when he installed Ittoshat as priest of St. Paul’s, making her the first Inuk Anglican minister in Montreal.

And in so doing, he effectively gave the church to Montreal’s Inuit population.

“When I was a parish priest, what I discovered was there was a fairly large group of Inuit people in Montreal… not just those who would come for hospital care, but residents here as well,” Clarke said.

“Here we had an opportunity to bring Annie Ittoshat in and to make some of those connections and provide some support,” Clarke said.

The church is “specifically for Inuit,” said Ittoshat, originally from Kuujjuarapik on Nunavik’s Hudson Bay coast.

“I’ve heard time after time that patients going to Montreal for hospital reasons, they have said that there was a grandmother who wished there was services in Inuktitut,” Ittoshat said.

Ittoshat’s goal is to keep Inuktitut alive in the church.

She stands in front of a group of 11 churchgoers on a -20 C Sunday morning in late February. The congregants, mostly Inuit, mainly women, focus on Ittoshat as she steps to the pulpit and speaks confidently in Inuktitut.

Ittoshat starts singing a hymn from a booklet of sacred songs translated into syllabics.

But she’s drowned out by one of her congregants who takes over the lead. The woman is animated and passionate; she sways back and forth, raises her hands to the sky and even gets down on her knees at one point.

This Sunday’s sermon was about forgiveness and welcoming, Ittoshat later explained.

“Knowing our history — what our parents, grandparents, brothers and sisters who went to residential school, what they had to endure, what they went through,” Ittoshat said. “And certain things taken away from them.”

“I said… it’s your church. I don’t want you to feel like you’re under the table, but [that] you are welcome,” Ittoshat said.

Welcoming Inuit to the church hasn’t been the norm in Montreal until recently, Bishop Clarke said.

“I think we’re just doing something that we should have done before,” he said.

“In our case in Montreal, we’ve been challenged to recognized the need for a ministry for First Nations people. Particularly among Inuit and so we’re providing that resource with an Inuit priest,” Clarke said.

In Montreal, home to about 1,000 Inuit, hearing a familiar language in church is important.

Ittoshat says the church is a bridge for Inuit, a way to worship and express themselves in their native tongue.

And she’s met people who have really needed that bridge — from students and medical patients to those who work for Makivik and the Kativik School Board.

But Ittoshat’s services reach beyond St. Paul’s. She delivers holy communion at the downtown YMCA just off Atwater Street as well.

When you ask Ittoshat if this is a lifetime goal achieved — to make history in one of Canada’s largest cities — she laughs. The fact is, she didn’t know her calling until 2003.

“I never thought about it. It was through a dream. I don’t remember the dream but when I woke up I had butterflies in my stomach. I’d never felt it before,” Ittoshat said.

That feeling took Ittoshat to Pangnirtung for a three-year minister’s program, and then down to Toronto to Wycliffe College for a masters in divinity, where she was the first Inuk ever to complete the program.

Now she’s living in the rector’s house beside St. Paul’s with her son and adopted son — both named Peter.

And she’s been dubbed “the best preacher” by at least one of her congregants.

“We’ve been so wounded as a people,” said one woman, who wished to remain anonymous after attending the two-hour long service.

“Because of outside influences that came to dominate and have imposed on use […] children were taught by a non-Inuk, another culture.”

It’s clear Ittoshat has made a home for herself — and her Inuit faithful — in Montreal. And it’s a stunning one, at that.

Another five minutes pass. Our conversation lulls and Ittoshat lifts her head again, marveling at a different cross at the back of the church framed by symmetrical wooden buttresses.

Ittoshat holds services every Sunday at 10 a.m. at St. Paul’s Anglican Church at 377 44 Ave. in Lachine.