Montreal Inuk discovers her past through filmmaking

“I’m just thinking about how much I love being Inuit. It’s a great thing” 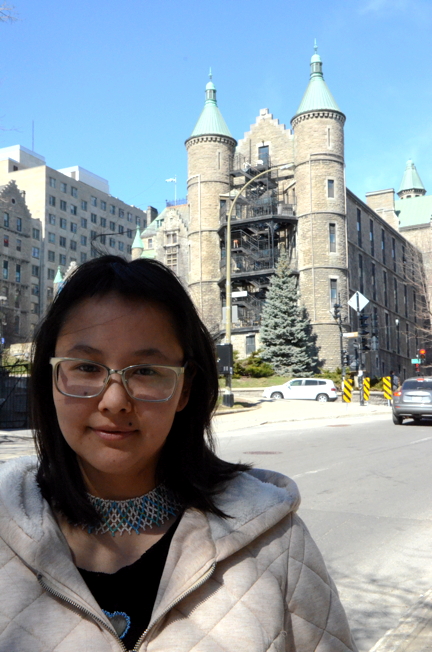 Isabella Weetaluktuk, 24, is an Inukjuak-born, Montreal-raised Inuk filmmaker who is making a short film called “Three Thousand,” about the history of Inuit culture and how it might evolve into the future using historical footage and animation. (PHOTO BY DAVID MURPHY)

MONTREAL — When Isabella Weetaluktuk was younger, she escaped the city in an effort to learn more about her people — and that curiosity never left her.

“I used to work on the Cruise North cruise ship and I went around the Canadian Arctic. And I think I did that because I was [raised] in the city,” Weetaluktuk said.

Weetaluktuk was born in Kuujjuaq, but raised in Montreal. Eventually, Weetaluktuk, whose father, Jobie Weetaluktuk, is also an accomplished filmmaker, got into filmmaking herself out of a desire to understand Inuit life and culture.

So two summers ago, the 24-year-old dove into thousands of hours of historical footage from the National Film Board and started piecing together a short film called Three Thousand.

“As an extension, this project will allow me to give an outlet to do the research and to figure out more about how people lived,” said Weetaluktuk.

“That’s really a driving force. Because I’m a little bit removed and because it’s not so easy to ask for stories from my family and kind of piece together an image that way,” she said.

“The way I can do it is by looking at all these images.”

And she’s passionate about the project.

Weetaluktuk has sifted through images dating back more then 50 years and when she speaks about her filmmaking process, she has to take a second to hold back the tears.

“Sorry […] I’m just thinking about how much I love being Inuit. It’s a great thing.”

The film documents three thousand years of Inuit life — past, present and future.

It begins in the 1940s with archival footage and shows how Inuit life evolved before and after contact with westerners.

“It’s going to end with the world in about a thousand years as I hope and dream it can be for Inuit,” she said.

The short film compiles some of that archival footage and then shifts into animation for the future portion, done in collaboration with Canadian animator Patrick Defasten.

Going through the endless archives was tough for Weetaluktuk — not just because of the countless hours it demanded but because some of the subject matter was overtly racist and difficult to watch.

Weetaluktuk gets choked up recalling what she saw.

“One of the hardest things to see is — there’s clips from human zoos,” Weetaluktuk said.

“Let’s say you see an image of a woman cutting a fish and you can see so many beautiful things. And out of nowhere — it takes a second to figure out what you’re seeing — and then you realize it’s Inuit who are on display,” she said.

“There are these clips of the Canadian government showing to the rest of Canada, ‘Oh look, we’re teaching them and they’re all in Western clothing.’”

Weetaluktuk said none of the images from the human zoo made it too her film — “that’s just too heartbreaking” — but these clips are necessary to keep for historical purposes.

“I think they’re important stories to tell but I think that you have to tell those stories because they’re really powerful on their own. It’s a different world than the one I’m working in,” she said.

The film also serves as an educational tool for the public because of these archival scenes, Weetaluktuk said.

“It’s educational for viewers who don’t have an idea, really, about how fast Inuit life changed and all the ways that it changed, and the driving forces behind those changes,” she said.

“I think you get a really good idea, even though it’s a short film and the history part is short, it gives a really good brief idea about it.”

Weetaluktuk said she hopes the film, now in the production stage, can be finished by December.

After that, she wants to screen the film in Inukjuak.

“That’s where my family lives. All of my aunts and cousins all live in Inukjuak. And this film is especially for Inukjuak and I would hope I could share it with other Inuit too.”

To hear the entire interview with Isabella Weetaluktuk, check out the latest episode of Nipivut, Montreal’s Inuit radio program.