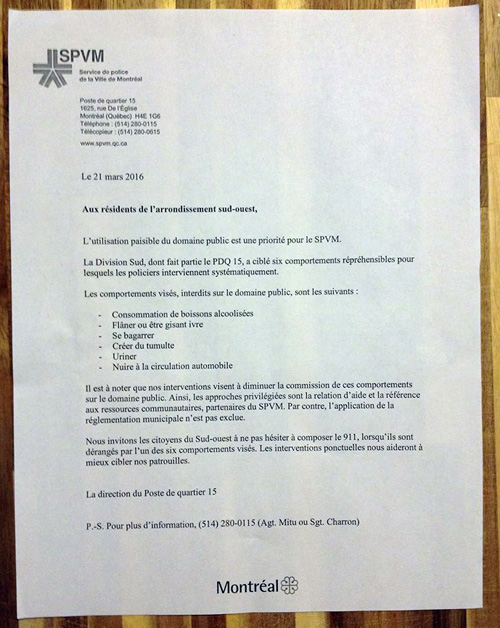 Montreal police were distributing this letter to residents of the city’s St. Henri neighbourhood this week, warning of recent disturbances. But when police visited one resident’s home, they suggested the disturbances had been caused by homeless Inuit in the neighbourhood. (IMAGE COURTESY OF S. PUSKAS) 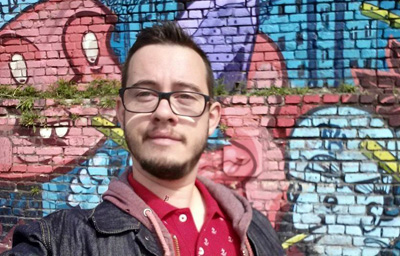 A Montreal man has filed a complaint with police after he says two officers racially profiled members of the city’s Inuit community.

Ossie Michelin was at home with a friend in Montreal’s St-Henri neighbourhood in the city’s Sud-Ouest borough May 10 when two police officers with the Service de police de la Ville de Montreal (SPVM) knocked on the door.

When Michelin answered, the officers explained in French that residents had made a number of recent complaints to police about public drunkenness, street fighting, public urination and loitering in the neighbourhood, and police were looking for the help of residents to crack down on it.

“They asked me if I had had any issues or had seen anything strange with any autochtones [Aboriginal people] but mid-word, they [switched] to itinérant [homeless],” he said.

“I was thinking in my head, maybe he just misspoke.”

But later in the conversation, Michelin said police asked him if he had noticed homeless Inuit sleeping outdoors in the neighbourhood.

“I really don’t like the idea of the police going around my neighbourhood spreading mistrust of Indigenous people,” said Michelin, an Inuk, originally from Labrador. “This is my neighbourhood. I don’t want people to feel suspicious every time an Inuit person walks by.”

The police officers also handed out a flyer outlining the various disturbances reported in the neighbourhood, although there was no reference to Aboriginal homeless people.

The neighbourhood Michelin lives in is close to Cabot Square, an urban park long known as a gathering area for homeless Montrealers.

The neighbourhood is also home to shelters that serve Indigenous groups, including homeless Inuit.

But while Michelin acknowledged that there are homeless Inuit who live in the neighbourhood, he said they are clearly outnumbered by non-Inuit.

“I think [the police] had no idea what they were doing was racial profiling,” said Michelin, a freelance journalist. “My issue is not them going door to door to warn people. But they just totally ruined it by picking out one group of people.”

Michelin and his friend Stephen Puskas, another Inuk Montrealer who was at his place when the officers came by, have filed complaints with police following the incident.

About 1,000 Inuit live in Montreal where many work for Inuit organizations, such as Makivik Corp. or the Kativik School Board, or are students.

For its part, the SPVM called the incident a misunderstanding.

“It was never [the officer’s] intention to disrespect the Aboriginal or Inuit community,” said Carlo Deangelis, the police force’s Aboriginal liaison officer.

“He excuses himself if he offended anyone.”

Deangelis said the SPVM has worked to establish a good relationship with Indigenous groups in the city, and particularly in that neighbourhood.

The force offers sensitivity training for its officers, he explained, which links historical trauma experienced by Indigenous groups to some of the vulnerable situations they struggle with today.

“Our ultimate goal is that they have a place to stay,” Deangelis said.