Film from 2010 pulls in its largest-ever live audience 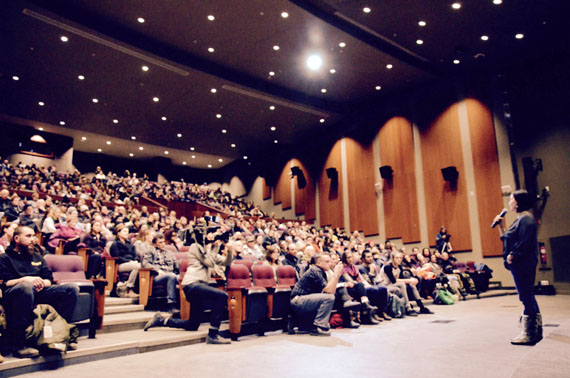 Alethea Arnaquq-Baril showed her film Tunniit: Retracing the Lines of Inuit Tattoos inside a 700-seat venue at Montreal’s Concordia University on Feb. 8. (PHOTO BY DAVID MURPHY) 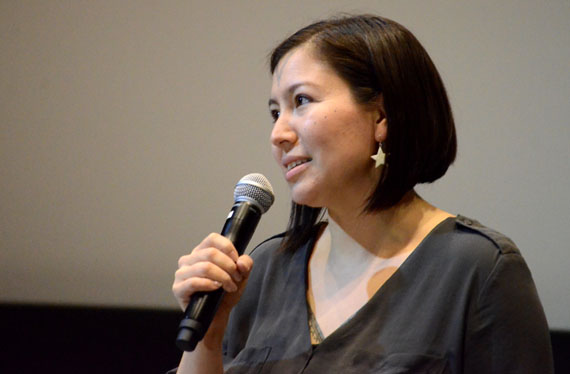 Alethea Arnaquq-Baril said she’s reluctant to show her film to a wider audience because she fears cultural appropriation, but also said her Feb. 8 Concordia audience provided a “safe environment.” (PHOTO BY DAVID MURPHY)

MONTREAL — Iqaluit’s Alethea Arnaquq-Baril steps onto the stage at the Alumni Auditorium of Montreal’s Concordia University and gasps into the microphone: “ho-ly!”

It was hard finding a seat Feb. 8 at the 700-seat Montreal venue for the screening of Arnaquq-Baril’s 2010 documentary, Tunniit: Retracing the Lines of Inuit Tattoos, about her quest to re-discover the traditional practice of Inuit facial tattooing.

But Arnaquq-Baril confessed that a large non-Indigenous audience, like the one she faced Feb. 8, isn’t exactly her target audience for the documentary — for fear of cultural appropriation.

The documentary has mostly been screened to Inuit or Aboriginal people.

“I was afraid that if I put out this film to a wider audience that we could end up with more non-Inuit with traditional Inuit tattoos than actual Inuit with Inuit tattoos, and that’s why I hesitated,” Arnaquq-Baril told the audience before the screening.

But she credited Cinema Politica’s “safe environment,” which allowed her film to be seen in context, and where she said tradition is celebrated.

In Tunniit, Arnaquq-Baril interviews elders across Nunavut with the help of Aaju Peter and the film ends with the two getting their own traditional face tattoos.

While the documentary is about tattoos, that’s not the only message to take away, she told Nunatsiaq News.

There’s a message for the southern Canadians audience as well.

“It wasn’t just about the tattoos. It was giving a bit of a history on why it disappeared and the role that Canadians have played in that.

“That southern Canadians of European heritage didn’t have a passive role in the destruction of our culture. It was a very active [role],” she said.

Many southern Canadians think of the loss of Inuit culture as happening hundreds of years ago, Arnaquq-Baril said.

“This film made it very apparent how recent it really is and that it is the people that are alive today that have affected us and continue to affect us so — that’s something I hope they take away from this film,” she said.

This was the largest ever screening of her documentary, Arnaquq-Baril said.

And screening her documentary in Quebec is a “perfect response” to the 2015 controversial film about Inuit called Of the North, she said.

Arnaquq-Baril has alleged that the film, by Dominic Gagnon, is racist and depicts Inuit in a poor light.

A professor who teaches Inuit studies at Concordia, Carol Rowan, said Gagnon’s film has been shown in Concordia classes. Gagnon has spoken about the movie at the university as well.

“I think what’s really important is that Alethea, as an Inuk filmmaker, has a place. And it’s not very easy for Inuit filmmakers to get the funding they need to be able to live a life off of filmmaking,” Rowan said.

“[So] it’s pretty disgusting how a guy like Dominic Gagnon can actually have his film posted on Société de développement des entreprises culturelles and promoted by SODEC, it’s really unacceptable.

But the positives of Inuit culture were certainly on display at the Feb. 8 screening.

Jenna Amarualik, who used to live in Igloolik but now lives in Laval, dressed in a red and white amauti and brought her baby to the screening.

She said the film had a great lesson for Inuit.

“It’s really good to learn more [about Inuit tattoos] because my grandmother didn’t teach me that. She was not around when that was popular,” Amarualik said.

Another Inuk in the audience, Ujarak Appadoo, grew up in Arviat but now attends McGill University in Montreal. This was her second time seeing the film.

“It’s important for everyone — for non-Indigenous but also Indigenous or Inuit that hadn’t necessarily known about these practices — to see that this tradition is trying to be kept alive and it was a real thing,” Appadoo said.

She also told the audience she’s in the process of getting Tunniit distributed on DVD soon.