“We wondered why it was so popular and kind of figured out: When we sing from our hearts we can’t go wrong” 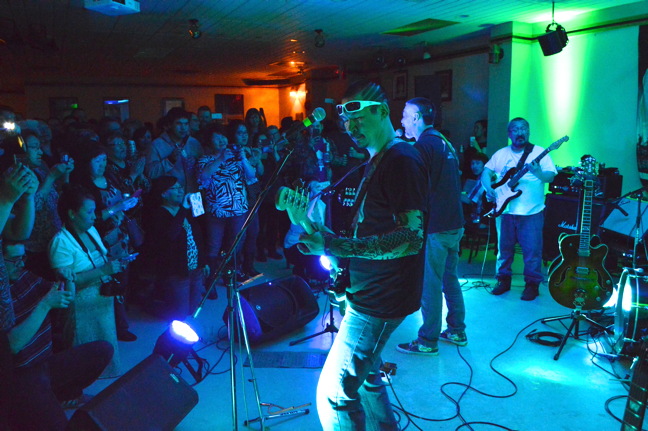 Northern Haze takes Iqaluit during Toonik Tyme in April. Derek Aqqiaruk plays vocals, guitar and bass for the “new” Northern Haze, an Igloolik rock band that has been playing music since the mid 1980s. (PHOTO BY STEVE DUCHARME) 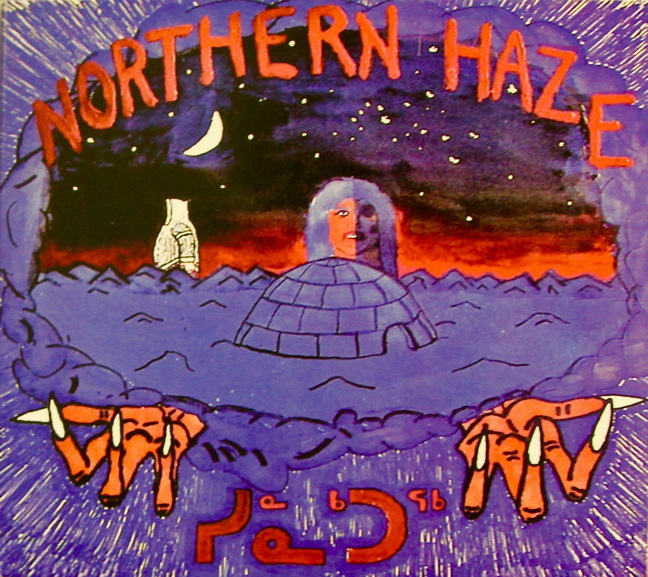 The original 1985 Northern Haze album was recorded under a CBC initiative to create more indigenous language recordings. Aakuluk Music has released a remastered version of the album on CD. You can purchase the album on iTunes, order it from Aakuluk Music or pick it up at a few select locations in Iqaluit, Rankin Inlet and Kuujjuaq. 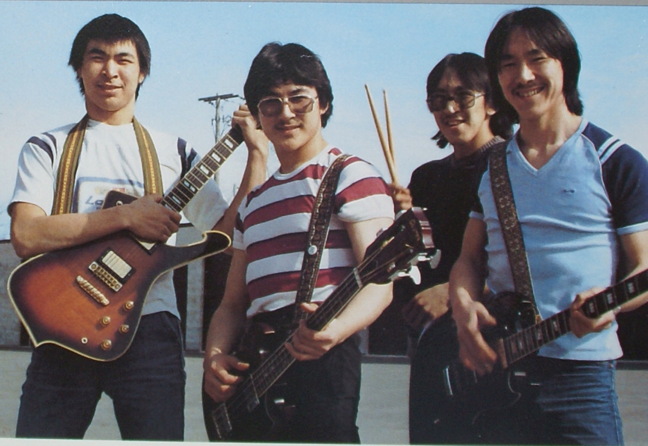 The original Northern Haze band, as seen on the back cover of the remastered version of their 1985 self-titled album. Two members have since passed away. (PHOTO COURTESY
AAKALUK MUSIC)

There was only one drum kit in Igloolik in the 1980s, and it was kept at the church hall.

“When we couldn’t get in we just played anywhere,” said guitarist James Ungalaq. “We played drums on the table, stuff like that.”

It was a challenge to start a band in the North, he said, sitting at a table in the Caribrew Café at Iqaluit’s Frobisher Inn—tired from a night of jamming at the Storehouse Bar and Grill the evening before.

“We were isolated in Igloolik and equipment was hard to come by,” Ungalaq said.

The band started out with two homemade acoustic guitars, built during shop class at the high school. Guitar strings and patch cables had to be ordered from the South.

“We were disconnected from the mainstream.”

Northern Haze—inspired by the Jimi Hendrix song “Purple Haze”—evolved from an another band called Northern Lights.

While church hall practice sessions with homemade guitars showed heart and dedication, Northern Haze weren’t serious about their music until an opportunity arose to record an album. The band’s self-titled release debuted in 1985, as part of a CBC project to record more Indigenous music.

A remastered version of that 1985 classic album was recently released by Nunavut’s only recording label, Aakuluk Music, with 2,000 limited edition CD copies.

The band last recorded an album in 2012, titled “Sinnaktuq,” a compilation of old and new works. This re-release is the first time Northern Haze music has been marketed digitally, meaning you can get it on iTunes.

The upcycled album is just the first step in the band’s current plans—a way to fund a new album the group plans to record with Aakuluk in Igloolik this January.

To fans, the new album won’t sound so new since it will feature songs the musicians have been playing at their shows for years, but it will be the first time those songs are professionally recorded.

“Some songs are about ourselves, about our struggles, inspirations. It’s about our lives,” said Ungalaq, adding one popular song was written for their bass player, Elijah Kunuk, who died of cancer in 2007.

“We wondered why it was so popular and kind of figured out: When we sing from our hearts we can’t go wrong.”

“Our bass player and lead guitarist are gone. We can’t replace them,” Ungalaq said.

The tragedies may have changed the band but it was not the end for Northern Haze.

“We were determined to carry on their legacy, their creations. So here we are,” Ungalaq said, as he looked up from under a faded ball cap and gestured toward his band mates.

Northern Haze now consists of veteran and rookie Igloolik rockers, with seasoned musicians like Ungalaq on vocals and guitar, Naisana Qamaniq on bass and guitar and John Iquaq Inooya playing the drums.

Ungalaq’s son Derek Aqqiaruk has stepped in as bassist, offering guitar and vocals as well, and a young Allan Kangok has brought keyboards into the mix.

“We have a lot of talented young inspirations, with older flavor—it’s grown, it’s evolved,” Ungalaq said.

Aakuluk Music’s Andrew Morrison, also of the Inuktitut alt-country group, the Jerry Cans, says passing on the torch is, “a northern style approach to being in a rock band.”

“They are inspiring the future generation of musicians in Igloolik,” said Morrison, adding that young rock lovers in the community are bound to include Northern Haze songs on their at-home mixes, “instead of looking to the South and looking to English music to blast on their stereos.”

Morrison said the 1985 recording was billed as the first hard rock Inuktitut album.

“They were 20 years old when they started… singing hard rock music, and about stuff like shamanism,” said Morrison, pausing as someone stops by to purchase a CD. “People cry at Northern Haze shows. I’ve seen lots of tears, people are so proud.”

Aakuluk is working to translate some Northern Haze lyrics so that a wider audience can experience the stories and themes in the music.

“They’re a legendary band in Nunavut but people are fascinated by them in the South as well. They haven’t been able to be shared as much as they should be,” said Morrison, who calls the artists workhorses for the industry and for a community—Igloolik—that is known for its strength in traditional Inuit arts and culture.

“It’s definitely the hard rock capital of Nunavut and it’s because of them,” said Morrison.

But according to Ungalaq, the success of Northern Haze comes from their Inuktitut-speaking audience.

While Ungalaq does remember having to sneak out a back door at Nakasuk Elementary School in Iqaluit to avoid getting mobbed after a show in 1984, he said generally the reaction from fans is one of gratitude.

“When we express ourselves in our own language, it is much deeper. It touches the heart, the spirit and the mind. It’s amazing,” Ungalaq said.

“They keep asking us to come back and we keep coming back. We feed each other, our audience and Northern Haze.”

The musicians are expecting to play in Baker Lake for Canada Day and will be back in Iqaluit for Nunavut Day.