“How much rain and snow fall is a pretty good predictor” 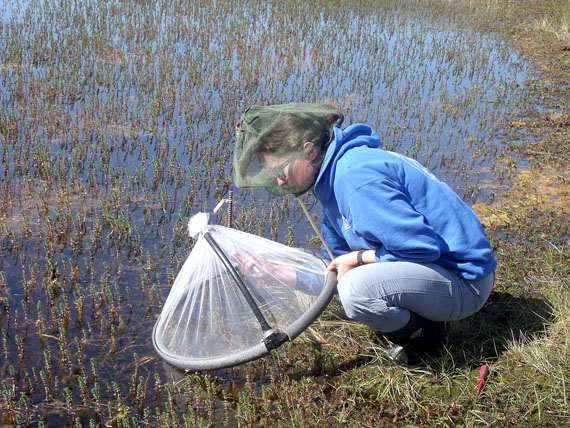 Lauren Culler samples the water for mosquito larvae on a snowy morning near Kangerlussuaq, Greenland, in May 2012. (PHOTO BY DANNY O’DONNELL) 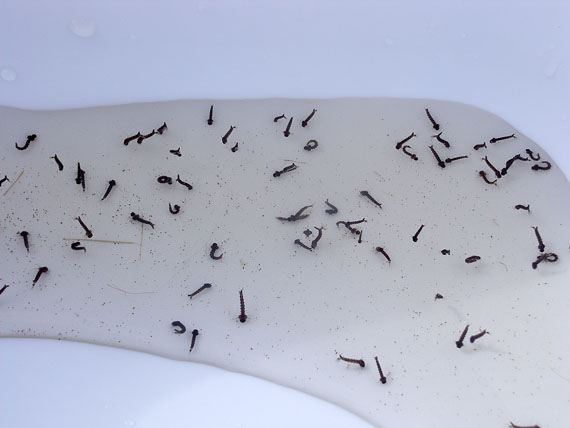 This is what mosquitoes look like in the immature, larval stage. (PHOTO BY LAUREN CULLER)

Just when you thought the buzzing in your ears couldn’t get any worse, it probably will.

The two species play chase in those ponds in May and June until they grow into adult insects. Once that happens, mosquitoes emerge from the pond and fly away to safety, and straight to your juicy ankles.

As climate change brings warmer springs to the Arctic, mosquito larvae will grow more quickly–just like plants—which means mosquitoes have a better chance of leaving ponds before being eaten.

Great news for them, sure, but potentially bad news for us, Culler says: it could mean more mosquitoes in the Arctic.

“Over the past few years, I think people have started identifying me as the Mosquito Lady,” said Culler, a PhD candidate in Ecology and Evolutionary Biology at Dartmouth College in Hanover, New Hampshire.

“It’s been a really great way to connect to people because everyone has questions about mosquitoes. Everyone experiences them and their wrath.”

Most Arctic researchers schedule their field research after mosquito season but Culler must time her visits to coincide with their emergence.

The 28-year-old from Maryland, however, has always been a little unconventional and is thrilled that she’s been able to turn a childhood love of ponds and nature into a career.

Female mosquitoes outwit the Arctic winter by laying their eggs on the dry edges of where ponds fill up with melted snow in spring. They do this in July, just before dying.

Once the spring melt covers the eggs with water, mosquito babies hatch and grow into squiggling larvae who spend about three weeks trying to out swim the beetle larvae, until they are able to escape their watery doom.

The two species of mosquito that live in Greenland also live in northern Canada, along with many other species, Culler explained.

And those same diving beetles, which feed on mosquitoes, live throughout the North, which means the same pond scenario is playing out here, in Nunavut.

Culler spent two months at a field camp this year about 10 to 15 kilometres from Kangerlussuaq, travelling to town on weekends to work in a lab. This past spring was her fourth trip to Greenland so she has a routine now.

Shortly after her spring arrival, she starts scooping up pond water to look for insect larvae. In June, when she sees the mosquitoes are nearing maturity, she puts tent-like nets over ponds to catch the mosquitoes as they learn to fly.

It turns out some clever spiders do exactly the same thing, she said, building sticky, silken webs above ponds in order to snag their prey.

After catching mosquitoes with those traps, and with a sweep net which she waves over the boggy tundra, she kills them through freezing and begins the tedious work of separating them by gender and then measuring and weighing them.

A mosquito weighs about a milligram or a thousandth of a gram—roughly equivalent to the weight of one grain of sand.

The males, which are darker, hairier and have bushy antennae, feed on plant nectar. It’s the females that must consume blood in order to produce eggs.

The Arctic provides an ideal venue to study how climate change is impacting the earth’s animal and plant systems because there are fewer species here to complicate the research, and the results. But Culler also keeps returning because of her affection for the peaceful landscape and warmth and culture of Greenlandic Inuit.

This year, she made a poster with diagrams and information explaining the life cycle of the mosquito and her related research and she posted it around Kangerlussuaq.

The poster, trilingual in Inuktitut, English and Danish, provoked endless and fascinating conversations with local residents about bugs and weather whenever she was in town.

Greenlandic Inuit told her that warm springs have traditionally meant more mosquitoes, a perfect example, she said, of the overlap between traditional and scientific knowledge.

She said this past spring was particularly warm in Greenland and locals were saying mosquitoes were going to be bad.

“And that’s correct,” Culler said. “It’s not the entire story but it’s part of the story. What I’m trying to do is complete the story by understanding how things such as precipitation play into this problem. How much rain and snow fall is a pretty good predictor of how bad the mosquitoes are going to be.”

Culler has one more year to complete her doctoral thesis and is hoping to secure further funding to continue her work thereafter.

Mosquitoes are a common conversation topic among northerners but strangely, they haven’t been studied much, she said, aside from some comprehensive work done on Ellesmere Island 50 years ago.

She’s hoping one day to return to the same Ellesmere locations to duplicate those studies and record whether, and how, the species have changed over the decades.

While Culler studies how climate impacts mosquito populations, other scientists are looking at what those pests might be carrying.

A 2005 article in the International Journal of Circumpolar Health entitled “The Potential Impact of Climate Change on Infectious Diseases of Arctic Fauna,” explored the possible increase of mosquito-borne animal diseases in the Arctic.

“Insects such as mosquitoes and ticks, that transmit disease agents, may also benefit from climate change as well as the diseases they spread,” the article said. “Increased temperature and precipitation, both associated with climate warming, will favour increased rates of some diseases as well as the expansion to other regions.”

The journal authors cited the prevalence of new and potentially deadly disease antibodies found in the blood of Alaskan bison, Dall sheep, snowshoe hare and Arctic fox which proves more northern animals are being exposed to southern diseases.