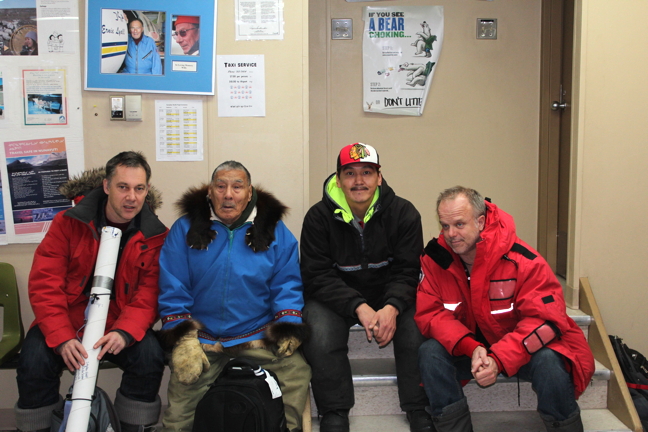 Stephan Schott, left, in Gjoa Haven in November with some members of the Gjoa Haven Hunters and Trappers Organization, just before heading to Taloyoak to meet with the HTO there to talk about a new local fishery study. From left: Schott, Jimmy Qirqqut, Kenneth Puqiqnak and Peter Van Coeverden de Groot. (PHOTO COURTESY STEPHAN SCHOTT)

A group of southern researchers have partnered with hunters and fishers in Gjoa Haven to figure out whether it might be possible, or even desirable, to start up a local commercial fishery in the western Nunavut community.

But a lot of things must be considered first, says Stephan Schott.

Researchers will need to find out where the fish are, how many there are, whether a commercial fishery might impact subsistence fishing and whether a small processing plant would actually be sustainable and not end up as another piece of abandoned northern infrastructure in 10 years.

“We want this to be fact-based and evidence-based and see what are the most reasonable things to do,” said Schott.

“It’s good to carefully, then, go through all the options and discuss it with the community, because it has to be what they want, and find acceptable.”

Schott, an economist from Carleton University who specializes in natural resource management, is collaborating with three biologists from Queen’s University in Toronto on a $5.6-million project to examine possibilities for economic development and food security in western Nunavut.

He thinks the answer might lie in the fish.

Part of Schott’s job will be to integrate science with traditional local knowledge.

Trained to recognize what works and what doesn’t when it comes to resource management, Schott will work with both marine biologists and local knowledge holders and will then present all that information so the community can decide what they might want to do.

Kenneth Puqiqnak, a 39-year-old subsistence hunter and fisher in Gjoa Haven, supports his own and his girlfriend’s children.

Right now, his snowmobile isn’t working because he needs a new piston — and he’s finding it tough lately to pay for gas and other supplies to get to the lakes where he sets up nets to catch Arctic char. It seems like he’s always struggling to put food on the table, he said.

Puqiqnak, a member of the board of the local hunters and trappers organization, was there in November when Schott and a colleague presented their project outline and all the things they hoped to accomplish in four years.

“They were saying all kinds of stuff, like helping out the people of Gjoa Haven to build a fish plant or even getting us a community freezer, which would be a good start,” Puqiqnak said. “But I’m not sure what they’ll do.”

Puqiqnak said there’s another multi-year, multi-million-dollar CanNor fisheries project currently underway in Gjoa Haven and he said he finds it confusing sometimes to keep all those studies straight.

It would be good to have a local project manager, Puqiqnak added, to keep track of who’s doing what, to ensure people in town have a say in what’s being done and to ensure they truly benefit from all those millions of dollars in research money.

“I mean, we don’t have many jobs, so we’re going along with it because the people of Gjoa Haven want to work. They want a few bucks in their pocket.”

Schott’s money is coming from Genome Canada, a federally-funded, not-for-profit organization that promotes genomics — the science of deciphering and understanding the entire genetic information, or DNA, of an organism.

Genome Canada usually invests in projects that develop and use genomic-based technologies for the economic and social benefit of communities.

Puqiqnak might be pleased to know that one of Genome Canada’s funding requirements is that research must be transformed into something useful for the community being studied.

So how does genomics fit into this project?

The biologists on Schott’s team will be working with local fishers to collect samples of nearby fish stocks which will then be genetically analyzed to see what species and subspecies exist in the rivers and coastal regions near Gjoa Haven.

That knowledge alone — which fish swim where, at what times of the year and in what numbers — will likely be valuable for local people, even if a fish plant never gets built, Schott said.

Puqiqnak agrees and hopes the scientists sample fish in the places where locals want them to and that they also test the waters to make sure there are no pollutants that could endanger the health of the fish they rely on for food.

In other words, local people want to help direct the research, and if Schott is true to his word, that will happen.

He says he’s committed to working with the local HTO members and broader communities of Gjoa Haven, Cambridge Bay and Taloyoak so that they can decide their own short- and long-term goals.

He plans to work with Nunavut Arctic College’s Environmental Technology Program as well so students can get hands-on training.

He’ll also collaborate with a Carleton colleague, Fraser Taylor and the Kitikmeot Heritage Society to create detailed and interactive atlases which will contain all the fisheries and environmental information they gather plus that which has been gathered in other recent studies.

Schott is examining several successful country food producers in Nunavut including Kitikmeot Foods in Cambridge Bay and Kivalliq Arctic Foods in Rankin Inlet but if Gjoa Haven decides a fish plant is viable, they might want to consider a co-op model, so the money stays in town, he said.

Puqiqnak stressed the importance of that. He said he didn’t want a company from elsewhere establishing a country foods business in Gjoa Haven and then taking the profits out of the community.