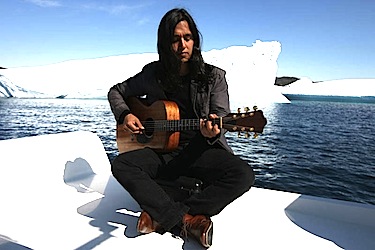 Simon Lynge, the popular Greenlandic singer and songwriter, is among the mix of musicians performing in Iqaluit during the Alianait Arts Festival. “Counting Elliott Smith and Nick Drake among his influences, Lynge’s music is a brand of quite faultless melodic rich pop,” says Music Week. (FILE PHOTO) 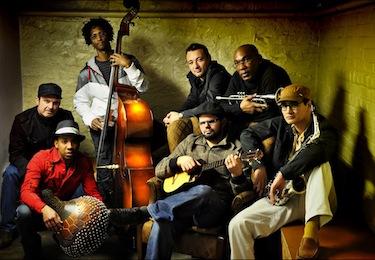 You’ll wish you were in Iqaluit this weekend.

That’s because this year’s Alianait Arts Festival, which kicks off June 29, features a slew of concerts and free workshops for adults and kids.

The action starts Friday night with a 7 p.m. ticketed opening concert in Nakasuk School that features Esther Powell and the Rough Cuts, a Rankin Inlet band in Iqaluit for the first time, that’s known for its mix of blues, Inuit rock and gospel.

Alianait’s opener also includes Ann Vriend, a singer and pianist from Edmonton, Nunavik singer-songwriter Saali (Charlie Keelan), and Iqaluit’s Jerry Cans, who play Inuktitut and English rock and say they’re “working hard to make sure awesome music by artists like Uvagut Band and Jimmy Ekho are embraced by the next generation of Nunavummiut.”

Then, on June 30 in the purple and yellow big-top tent, set up in front of Nakasuk School, you’ll find the Alianait “Kids Fest” from 10 a.m. to noon.

That features the Takuginai puppets from popular Inuit children’s show by the Inuit Broadcasting Corp. and Washboard Hank — a one-man entertainment extravaganza, who plays the kazoo, banjo, duck calls and license plates.

Also performing with Hank is Lance Loree on the guitar and dobro tenor guitar used in bluegrass music.

Also on June 30: the ticketed lumberjack, acrobactic circus show, Timber with Nunavut’s Artcirq and Quebec’s Cirque Alfonse. You can see them during a matinée performance from 2 p.m. to 4 p.m. or in an evening show from 7 p.m. to 9 p.m.

• a free concert and square dance in the big-top tent from 2 p.m. to 4:30 p.m., with Washboard Hank, Esther Powell and the Rough Cuts, Zebedee and Jeannie Nungak from Nunavik, who play button accordian, the popular Cape Dorset square dance band Sikusilaaq Band and Stephen Innuksuk.

Then after the square dance the 7 p.m. ticketed “Celebrate Canada” concert inside the Nakasuk school gym.

There, you can hear Agaaqtoq aka Abraham Eetak from Arviat, will sing in Inuktitut. The contemporary pop group from southern Ontario, the Donefors, Kikkukia, an alt-rock band who also sings in Inuktitut, and Trinidad-by-way-of-Toronto calypso-reggae band Kobo Town, back to Alianait after rave reviews in 2009.

• a ticketed closing concert from 7 p.m. to 10 p.m. in the Nakasuk gym with Greenland’s Simon Lynge in his first performance on a Canadian stage, along with Buzy B and the Honeycombs, a five-piece band of drums, keys, bass, guitar, voice, turntable and percussion from Vancouver, Iqaluit’s own The JJ’s, and Brazilian jazz singer Fernanda Cunha.

As for the free workshops, you’ll be able to check them out in the Elders Qammaq, big-top tent, or Centennial Library during the day from June 29 to July 1:

• June 30 in the big-top tent: puppet making for children and families from 9 a.m. to 10 a.m., followed by puppet-theatre, the kids’ rockstar stage, face-painting and a kids art wall;

• also on June 30: puppets and stop motion animation workshop for youth at the library, and a west African drumming workshop at the Elders Qammaq; and,

Full festival programs are available at the Centennial Library and Arctic Ventures or go to the Alianait website for more information.