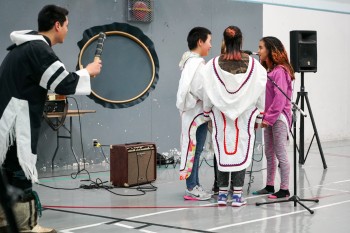 A student group, Atiqtaliit, provides the opening act along with drum dancer Devon Manik for an Alianait concert in Resolute Bay, on Oct. 4. (PHOTO COURTESY OF PARKS CANADA) 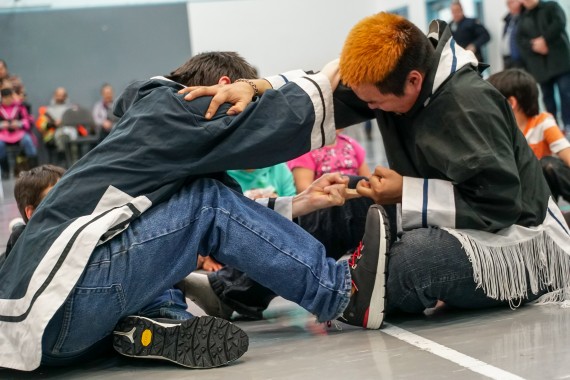 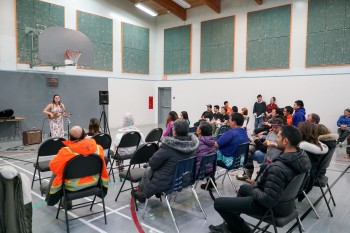 Over 70 people came out for a mental health awareness day hosted in Resolute Bay at the hamlet gym, on Oct. 4. The day included a concert, storytelling and Inuit games. (PHOTO COURTESY OF PARKS CANADA) 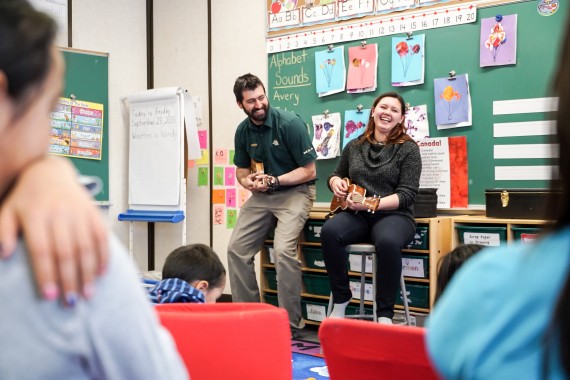 You can do a lot of good with a box of ukuleles.

Pangnirtung singer-songwriter Aasiva found this out when she visited the High Arctic community of Resolute Bay earlier this month as part of Alianait’s mental health awareness tour.

In an afternoon, on Thursday, Oct. 4, she taught a group of Grade 7 to Grade 12 youth at Qarmatalik School how to play chords and read music for the four-stringed instrument. That morning, she led a workshop in throat singing for younger students and taught them one of her own songs.

When studying at Nunavut Sivuniksavut in Ottawa, Aasiva said that she often used music as a way to get through difficult times.

“I’ve been told, if you don’t have words to say anything, sing,” she said. “There’s really no feeling like having people singing along to your songs and being very excited to sing in Inuktitut.”

The students all learned her song titled Play in the Snow.

“In the Arctic we have winter for most of the year,” Aasiva said. “This song was to remind myself and others around me that when you’re feeling down or you feel like you’re kind of stuck, to just go play in the snow, to be out on the land and to ground yourself.”

The music workshops, and an evening concert at the hamlet gym in Resolute Bay, were part of a full day of events held to promote mental health awareness in the Baffin community of about 200, organized by the Alianait Arts Festival, Quality of Life Secretariat and Parks Canada.

Residents also gathered to take part in Inuit games and a storytelling circle with elders and youth.

“It was a jam-packed day,” said Jovan Simic, acting park manager for the Qausuittuq National Park located near Resolute Bay.

The storytelling circle flows from a suggestion made by a Parks Canada–led Inuit knowledge working group in the community.

“We heard from them that culture and youth engagement are very important,” said Simic, adding that one priority for work in Nunavut parks is “to foster the transfer of knowledge from one generation to another.”

This could in turn make youth more prepared to take on roles with the national park, he said.

It was the first time Alianait had visited the community. The trip—supported by the Government of Nunavut, Nunavut Tunngavik Inc., Qikiqtani Inuit Association and Calm Air—follows another stop on this year’s mental health awareness tour, in Arctic Bay.

The evening concert opened with a performance by a young drum dancer, Devon Manik, and a four-part group of musicians by the name of Atiqtaliit. They sang a traditional song about welcoming the sun in spring.

“We always request that (Alianait) artists are preceded by community bands and other local artists to give them a chance to perform, and exposure to what it’s like to be on stage,” Perron said.