“Changing temperature and snow conditions affect the diet of muskoxen” 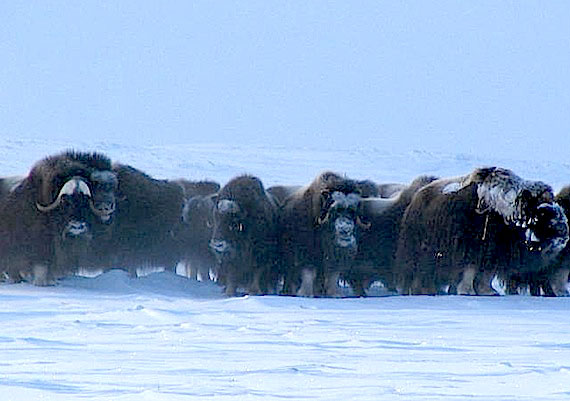 Analysis of hairs from the rear ends of muskoxen in Greenland show that snow-heavy winters are hard on these animals.

That’s according to a study published April 20 in the online journal Plos One, called “Show Me Your Rump Hair and I Will Tell You What You Ate — The Dietary History of Muskoxen,” from the Arctic Research Centre at Denmark’s Aarhus University.

Like other hooved animals in the Arctic, female muskoxen are more likely to bear calves when they have lots of fat and protein stored for the winter, the study notes.

“The muskox relies heavily on fat reserves built up over summer and autumn as an energy reserve during the snow-covered period. In addition, adult females must support pregnancy and lactation through body stores until plant growth resumes in spring,” the study said.

By the end of the rutting season, adult female muskoxen must build up their fat reserves by about 20 per cent to mate.

But, in snowy years, they have trouble building up that fat supply.

For their study, the researchers used muskox guard hair to provide a record of animal diets by detecting nitrogen, which varies according to the season.

They clipped guard hair samples from the rumps of 10 muskoxen from northern Greenland and then reconstructed their diets over the previous two and a half years.

The researchers found that the diets of the muskoxen were closely linked to changes in the temperature and snow depth.

They also found the nitrogen levels in hair may be used as an indicator of winter diet quality and body condition.

Given the close link between muskox body condition and reproduction, this method could help survey difficult-to-access muskox populations affected by climate change, the researchers said in an April 20 news release.

“With climate changing twice as fast in the Arctic than elsewhere, and with declining muskox populations in the Arctic, understanding how a changing climate is affecting a key species in the Arctic is crucial,” said lead researcher Jesper Mosbacher.

“This study provides a unique and novel insight into how changing temperature and snow conditions affect the diet of muskoxen, and thereby, ultimately, the production of new calves.”