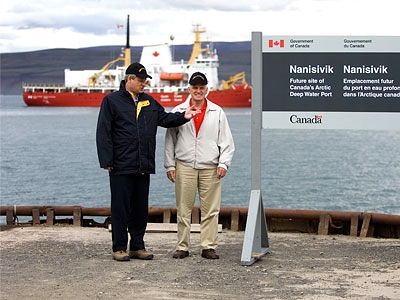 Prime Minister Stephen Harper and Gordon O’Connor, then the minister of national defence, on Aug. 10 2007, when they announced creation of a naval station at Nanisivik. Under their original plan, construction would have begun in 2010 with completion by 2015. The facility is now likely to open by 2018. (FILE PHOTO)

Hiccups with construction at the site of Baffin Island’s Nanisivik naval port have now delayed the opening of the facility until 2018, the federal defence department said this week.

Prime Minister Stephen Harper first announced in 2007 that the Arctic deep water port would be built at Nanisivik, the site of an existing dock once used by the now defunct zinc-lead mine of the same name.

Construction was originally planned to start in 2010 and wrap up this year but the Department of National Defence now says that “further site investigations” are needed.

“There are many challenges operating in the North,” the department said in a March 5 email to Nunatsiaq News.

“Any infrastructure work in the Arctic poses a number of unique challenges due to the remote located and various other difficulties, such as a shorter construction season and permafrost.”

Construction at the site was approved by the Nunavut Impact Review Board in 2013, and awarded last summer to the Iqaluit-based Almiq Contracting Ltd.

Work finally began at the site in August 2014.

Site preparation, including rock crushing, will occur during the upcoming construction season. In the two years following, 2016 and 2017, crews will upgrade the road and construct a tank farm, the department said.

The project’s estimated costs, pegged at $146 million, includes the initial $116 million that government officials announced at its launch plus costs for site studies and design.

But the initial scope of the project has been reduced to make sure the project stays within budget, the department said.

The Nanisivik naval facility’s main goal will be to refuel the Royal Canadian Navy’s new Arctic/Offshore patrol ships during the open water season, a scale-down from the original plan which involved a permanent office.

The facility will house storage tanks for naval fuel, a site office and a wharf operator’s shelter.

“There will be modest repairs to the jetty and there will be a helicopter landing pad,” the department said in its email.

“Additionally, the facility will provide the Canadian Coast Guard with a space to store cargo during Arctic re-supply missions.”