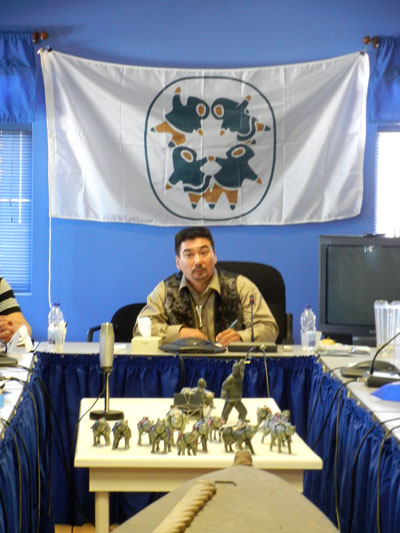 Terry Audla, president of Inuit Tapiriit Kanatami, at an ITK meeting held in 2012. On Jan. 28, his organization released a document and accompanying video that the organization calls a “compendium of Inuit ideas.” (FILE PHOTO)

Terry Audla, president of Inuit Tapiriit Kanatami, released what his organization calls a “compendium of Inuit ideas” and attitudes Jan. 29 at a big academic conference on Arctic security and sovereignty.

The Munk-Gordon Arctic Security Program’s third annual conference, this year called “Arctic Peoples and Security,” is taking place at the University of Toronto until Jan. 30.

The Inuit ideas produced by the Nilliajut Project, or “to speak up, speak out,” are contained in a 76-page anthology of essays written mostly by Inuit describing Inuit perspectives on security, patriotism and sovereignty.

“Inuit have played our part in asserting the sovereign rights of Canada in the Arctic,” said Audla, who appears in the film and contributed a manuscript to Nilliajut.

Nilliajut looks at the “multifaceted views of security, patriotism and sovereignty in the Arctic through the eyes of established and emerging Inuit leaders and thinkers, including Pujjuut Kusugak of Rankin Inlet, Myrna Pokiak of Tuktoyaktuk, and Rosemarie Kuptana of Sachs Harbour, who participated in a panel discussion during the conference,” ITK said.

The sovereign rights talked about in the film are “founded on the bedrock of Inuit use and occupation of Arctic lands and waters,” Audla said.

However, Inuit are at or near the bottom of many indicators of socio-economic well-being, which results in significant insecurities, such as uncertain access to nutritious food, susceptibility to disease and limited assistance for those who suffer mental illness or addiction, he said.

“Climate change at a rate and of an intensity that appears unprecedented, and well outside Inuit cultural memory, creates insecurities of an entirely new nature,” said Audla.

This generates concerns “about the sustainability of large aspects of inherited and acquired patterns of life, and our very sense of who we are as Inuit,” he said.

The project is produced by Inuit Qaujisarvingat: The Inuit Knowledge Centre, along with the Walter and Duncan Gordon Foundation and the Canada Center for Global Security Studies at the Munk School of Global Affairs, University of Toronto.

Based in Ottawa inside the ITK offices, Inuit Qaujisarvingat is set up to promote Inuit involvement in research that leads to better research, science and policy decision-making.