“Without more detailed information, it is unclear what these changes will mean for Inuit” 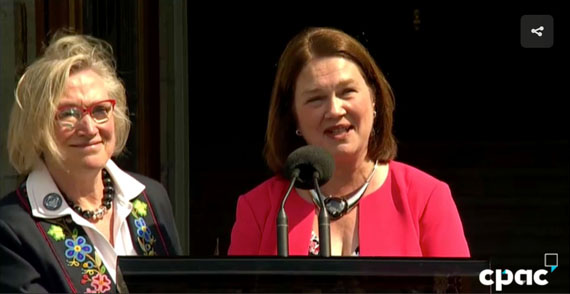 Carolyn Bennett, the minister of Crown-Indigenous Relations and Northern Affairs, and Jane Philpott, the minister of Indigenous Services, at a press conference held Aug. 28 in front of Rideau Hall in Ottawa following a swearing-in ceremony for new federal cabinet ministers. (VIDEO GRAB FROM CPAC)

The leader of Canada’s national Inuit organization is adopting a wait-and-see stance in reaction to Prime Minister Justin Trudeau’s decision to dissolve Indigenous and Northern Affairs Canada and replace it with two new departments.

But the ITK president said he needs more information before he’ll be able to express an opinion on what the move might mean for Inuit living within Canada.

“Without more detailed information it is unclear what these changes will mean for Inuit,” Obed said.

Though the federal government will consult Indigenous peoples before completing the restructuring of INAC, this suggests Bennett will continue to work on treaty rights, land claim agreement implementation and the northern development work that INAC performs in Nunavut, where the department is still in charge of managing Crown lands.

Jane Philpott, the former national minister of health, will now serve as minister of Indigenous Services.

In that role, Philpott will oversee services, like education, housing and water and sewage, which the federal government still delivers to First Nations communities that don’t have self-government agreements.

Obed said he welcomes the Trudeau government’s acknowledgment that Ottawa must do better in providing services to Indigenous peoples and he hopes for better services for Inuit.

“I am hopeful that the new direction will result in improved communication with Inuit and responsiveness to Inuit needs and priorities,” Obed said.

“Today’s announcement of a minister of Crown-Indigenous Relations and Northern Affairs and a minister of Indigenous Services signals a new approach to increasing action across our agenda,” the AFN national chief, Perry Bellegarde, said in a statement.

The Native Women’s Association, on the other hand, criticized Trudeau for going ahead with the decision to split INAC without first obtaining the free, prior and informed consent of Indigenous women.

“Having not been consulted, we are now suddenly in the position of building the capacity to engage with the ministers of Crown-Indigenous Relations and Indigenous Services, NWAC President Francyne D. Joe said in a news release.