“This is a chance for give and take” 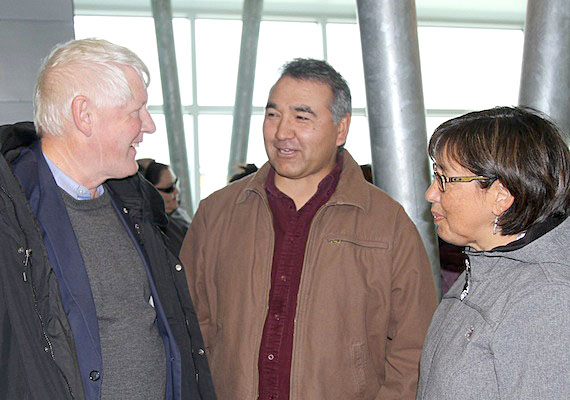 Bob Rae, the former Ontario premier and interim leader of the federal Liberal party, with Makivik president Jobie Tukkiapik and KRG chair Maggie Emudluk during a 2012 visit to Kuujjuaq. Rae, who now works for the Olthuis Kleer Townshend law firm in Toronto, will speak during this week’s national aboriginal law conference in Iqaluit. (FILE PHOTO) 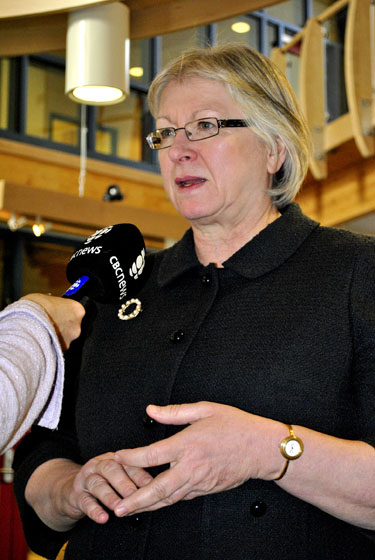 Sheila Fraser, the former Auditor General of Canada, will moderate a discussion on governance and lead the closing session at a big aboriginal law conference to be held June 19 and June 20 at the Frobisher Inn in Iqaluit this week. (FILE PHOTO)

Prominent Canadians such as Matthew Coon-Come, Thomas Berger, Bob Rae, Sheila Fraser, Paul Okalik and John Amagoalik will join lawyers from across Canada in Iqaluit June 19 and June 20 for a big conference on aboriginal law organized by the Canadian Bar Association.

“This is a great event. I think we should proud to be hosting it,” said Cindy Kieu, a Nunavut lawyer and member of the bar association’s Nunavut branch.

Kieu said the conference, which took about three years to organize, will take a close look at the implementation of land claims agreements, treaties and self-government agreements.

“Treaties are uniquely relevant to the Canadian political and legal reality, and they represent tremendous potential and implications for social, political, and economic growth,” she said.

“However, implementing these treaties, and achieving their intent, remains a significant and critical task.”

To that end, a variety of speakers and panelists will look at whether aboriginal peoples are getting what they expected from their treaties with the Crown, as well as land claims implementation, resource management and governance.

One session, to be attended by lawyers Marie Belleau and Dugald Brown, former federal negotiator Tom Molloy, former Inuit negotiator John Amagoalik, and Guy d’Argencourt, manager of claims implementation at the Government of Nunavut, will look at the Nunavut land claims agreement as a case study.

Another session, led by Montreal lawyers Peter Hutchins and Robin Campbell, will look at whether the federal government has paid sufficient attention to Inuit rights in its submissions under the United Nations Law of the Sea aimed at expanding Canadian sovereignty over Canada’s continental shelf extension.

Hutchins and Campbell have recently written a paper on the matter for Sen. Charlie Watt of Nunavik.

Thomas Berger, the aboriginal rights lawyer from British Columbia who acted as a conciliator in the protracted implementation dispute between Ottawa and Nunavut Tunngavik Inc., will give a keynote speech, as will Matthew Coon-Come, grand chief of the James Bay Cree Nation of Iiyuuschee.

Other speakers include Nunavut Justice Minister Paul Okalik, Sheila Fraser, the former Auditor General of Canada, and Bob Rae, the former interim leader of the federal Liberal party who now works for the Olthuis Kleer Townshend law firm in Toronto, which represents aboriginal clients across the country.

“This is a chance for give and take, a chance for people to talk about the issues patiently and respectfully,” Kieu said.

She said this is the first time Nunavut has hosted the CBA’s national aboriginal law conference, which is organized under the association’s aboriginal law section.

And many conference participants are expected to pack donations for the Nunavut Food Bank into their luggage, Kieu said.