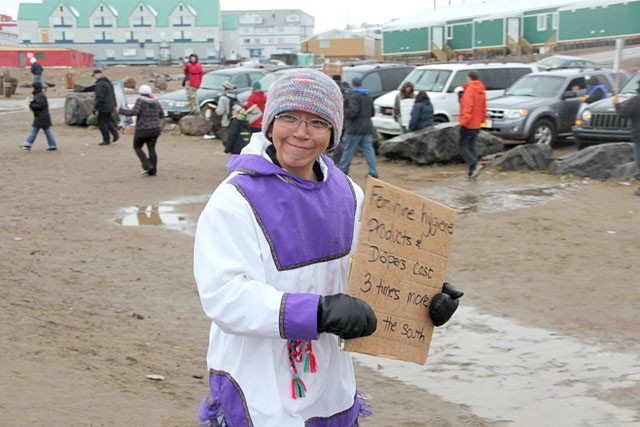 Leesee Papatsie, seen here at a food price protest in Iqaluit in June 2012, says she didn’t want to be singled out for a national political citizenship award at first but was convinced it might help keep her Feeding My Family cause alive. (FILE PHOTO)

Leesee Papatsie doesn’t think of herself as a political citizen — not even an activist.

A year-and-a-half ago, Papatsie created the wildly popular Facebook group to demonstrate the high cost of food in the North, Feeding My Family.

Feeding My Family encouraged people to raise awareness of the cost of food, and it’s where the idea of food protests in Nunavut originated.

Despite her modesty, Papatsie was recognized recently for sparking the movement with a nomination for an “Everyday Political Citizen” award from the Canadian research group Samara.

The award “celebrates the unsung heroes of Canadian democracy” by nominating more than 200 Canadians from across the country.

Of those, contest jurors selected 13 finalists, and another eight youth finalists, for the award.

Samara announced Feb. 3 that Mark Coffin, who encourages democracy in Nova Scotia through the Springtide Collective, which he founded, won the award for 2013, but Papatsie deserved recognition nonetheless, says Kathleen Monk, the juror who chose Papatsie among all those nominated.

“I deeply admire how she is standing up to chronic food insecurity, both in Iqaluit and across the North, and in doing so, encouraging people to challenge governments and retailers to lower costs and increase the affordability of food in North,” said Monk, senior advisor at the Broadbent Institute in Ottawa and formerly director of strategic communications for the late national NDP leader, Jack Layton.

Monk said she is also encouraged that the Auditor-General of Canada is looking into Nutrition North and hopes his report, expected in fall 2014, will lead to lower food prices in the North.

“While it’s encouraging that the government implemented a program that attempts to relieve the cost of food in the North, I have heard that there are some real concerns associated with how the subsidy is actually impacting prices at the check-out counter,” Monk wrote, in an email to Nunatsiaq News.

“It underscores just how important Leesee’s work is to her community.

“No one should have to worry about putting food on the table for themselves and their family,” Monk continued, “and these kinds of real stories — the ones that Leesee tells through her advocacy — are what make northern food insecurity real and immediate.”

Initially, Papatsie balked at being singled out.

“Originally I said no,” Papatsie said, “because I didn’t do the Feeding My Family for me. So that personal recognition is not what I want.”

Then, Taha Tabish, who nominated Papatsie, convinced her that the nomination might help to raise awareness of her efforts around food security.

“And so I did that at the last minute,” Papatsie said.

Papatsie said the Facebook group has made a big difference since it began in the spring of 2012.

“It’s not one of these best kept secrets anymore,” Papatsie said.

Members of Feeding My Family are monitoring food prices every month by taking photos and documenting whether some items at grocery stores around Nunavut are getting more expensive or not.

The point is to “show people how much the food costs up here per month,” Papatsie said.

Members of the group, in half a dozen Nunavut communities, are three months into a data-gathering project, but some are suffering a backlash as a result.

“There’s that harassment that community members get from store managers,” Papatsie said.

That’s why Papatsie said she wants to keep the locations of the communities a secret.

“People say, ‘I’ve deleted my picture because the store manager or store owner gave me crap. Told me to go shop somewhere else,’” Papatsie said. “So we kind of keep it confidential now.”

Other volunteers, mostly southerners, often ask how they can help the cause.

For that, Papatsie has two answers, the first being — spread the word.

“Number two: Write to your [Member of Parliament]. Write to your elected official. The more awareness and the more people understand what’s happening, it’s easier to change stuff in the future,” she said.

That change isn’t easy with culture restraints, however. Protests go against Inuit tradition of not publicly speaking up about issues.

“When people lived in camps, people had to be in harmony with one another. And don’t cause any friction,” Papatsie said.

“I think if anything [Feeding My Family is] showing it’s okay to step up, which, in the Inuit culture, is something that is not allowed,” Papatsie said.