“When it comes to the inequality of Canadian women, Indigenous women are the most marginalized” 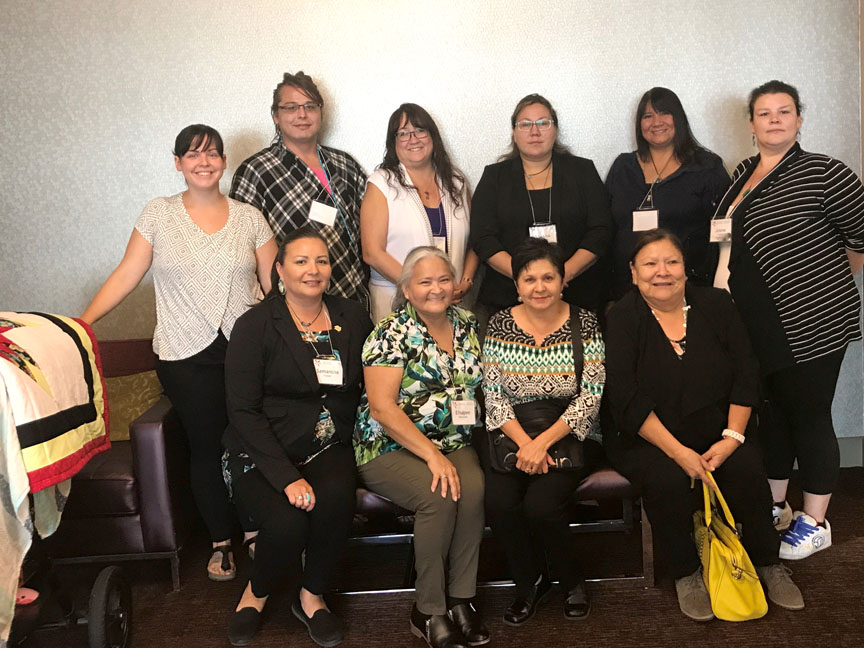 Indigenous women who are part of Gender Equality Network Canada, which held its inaugural meeting Sept. 21 in Toronto. (PHOTO COURTESY OF ELISAPEE SHEUTIAPIK)

A new group tasked with creating an action-oriented plan for women’s equality in Canada wants a reset of the National Inquiry into Missing and Murdered Indigenous Women and Girls, says a motion passed at its inaugural meeting in Toronto, Sept. 20.

And there’s a Nunavut connection.

The Gender Equality Network Canada, formed by 150 women leaders across various sectors in Canada, declared that it stands in “solidarity” with Indigenous women, and “asks that the National Inquiry into Missing and Murdered Indigenous Women and Girls be reset.”

The motion was put forward by the network’s 10 Indigenous members, who are mostly from Manitoba and Quebec, but who also include a former Iqaluit mayor and now president of Nunavut’s Qulliit Nunavut Status of Women, Elisapee Sheutiapik.

On the second day of meetings in Toronto, participating members agreed that “it was clear, when it comes to the inequality of Canadian women, Indigenous women are the most marginalized,” Sheutiapik told Nunatsiaq News, Sept. 25.

Receiving support for a reset from the 140 other members of the national network was “significant,” Sheutiapik said.

The $53-million inquiry, which launched in September 2016, has attracted growing criticism from critics who say the inquiry’s progress thus far has been slow and poorly communicated.

On July 11, one of the inquiry’s five commissioners, Marilyn Poitras, also resigned.

Sheutiapik has criticized the inquiry in the past because of the absence of an Inuit commissioner and the availability of Inuktitut-speaking facilitators at inquiry events.

One of the inquiry’s remaining four commissioners, Qajaq Robinson, speaks fluent Inuktitut and was raised in Nunavut, but is not of Inuit descent.

Sheutiapik said she believes a reset will give the inquiry time to re-prioritize and learn from its critics—and doesn’t need to look any further than the Truth and Reconciliation Commission, which completed its work in 2015.

“At the end of the day, they made changes and the TRC continued on and made a report that everybody refers to,” she said.

“If there’s a delay that provides ample opportunity for the Inuit organizations to appoint Inuit and get them up to speed on what’s happening with the inquiry, I think it would be a win-win.”

Inquiry commissioners appeared for the first time before the House of Commons Standing Committee on Indigenous and Northern Affairs Sept. 21, explaining in part that the commission’s progress has been slow due to technology-related issues.

Those were “bureaucratic answers,” Sheutiapik said, adding that it shouldn’t take more than a year to smooth out administrative glitches.

During its appearance before the standing committee, the inquiry’s commissioners also suggested that they may request additional funding, due to projections that they will have spent 75 per cent of their mandated budget by the end of 2017.

While the commission is scheduled to wrap up by the end of 2018, it is also expected that commissioners will request more time to complete their work.

The commission will begin its first round of community hearings at the end of September, with a hearing in Rankin Inlet—so far Nunavut’s only scheduled stop—set to begin Dec. 11.

Inuit survivors and families with questions about participating in the inquiry can visit its website or contact its Inuit community liaison officer, Looee Okalik, by phone at (613) 762-9983 or by email at l.okalik@mmiwg-ffada.ca.