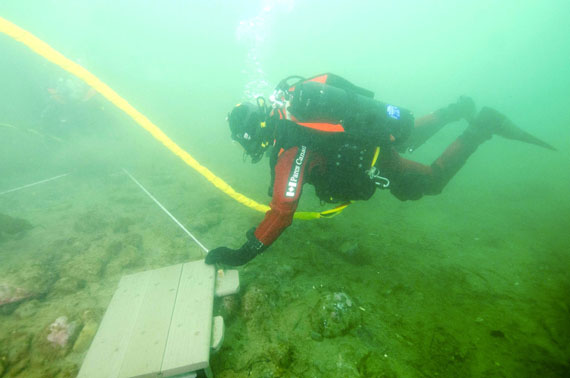 Suited up in diving gear fit for the waters of the High Arctic, a Parks Canada diver enters icy waters in Stittsville, Ont., during a training session in preparation for a diving mission to the wreck of HMS Erebus in Nunavut next month. (PARKS CANADA PHOTO) 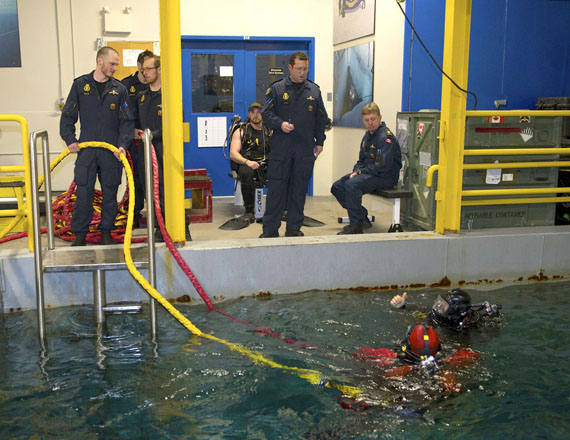 Royal Canadian Navy and Parks Canada divers train in Halifax this past February in preparation for archaeological dives to HMS Erebus, as part of Canadian Forces’ Operation Nunalivut 2015 in April. (COURTESY OF DND-MND CANADA) 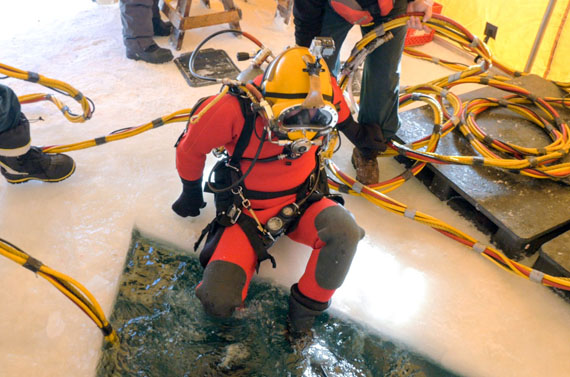 The High Arctic winter proved too harsh for the British Royal Navy 170 years ago, when sea ice trapped and entombed the Franklin expedition’s two ships.

But those same conditions will be ideal for the Royal Canadian Navy’s Atlantic Fleet Diving Unit next month, when it will direct an “ice dive” to the graveyard of one of those ships — HMS Erebus — and help Parks Canada investigate how the 19th century British expedition met its end.

“We picked the month of April because at this time, it is likely that the ice will be thickest,” he said.

“We’re looking at approximately seven feet [two metres] of ice that we’re going have to drill in order to conduct the diving operations.”

The Navy will carry out the dives with Parks Canada as part of the 2015 version of the annual Operation Nunalivut armed forces exercise.

Parks Canada discovered the wreck of the Erebus last September with the help of the Canadian Coast Guard, the Royal Canadian Navy, and resources from other government and private agencies.

Sonar technology shows the ship sits five to six metres under the surface of the sea, just off an island in Queen Maud Gulf.

Shortly after the discovery, Parks Canada scrambled to take a quick series of exploratory dives to the wreck, before the seas started to freeze up.

“We didn’t have a chance to spend much time at the site,” said Marc-André Bernier, chief of Parks Canada’s underwater archaeology team.

Parks Canada divers lost five days of work due to stormy conditions, he said, but managed to complete two full days of diving.

Diving under the ice, which Bernier and the Navy refer to as “working from a floating platform,” has many advantages.

First, weather conditions at the surface have less of an impact on diving operations, which will be shielded by the ice.

Second, waters around the wreck are more calm under the winter ice — which means visibility will be better.

The ice’s stable platform also allows diving teams to use “specialized equipment, that normally underwater we wouldn’t be able, or it would be more difficult to bring because we would need a large vessel,” Julien said.

“On the ice, we can bring in that specialized equipment, establish a camp directly over the site itself and extend our diving hours,” he said.

The location of the wreck is more than 150 kilmetres south of a location in Victoria Strait, northwest of King William Island, where the Franklin expedition’s two ships, HMS Erebus and HMS Terror, came to a halt in 1846 during their attempt to sail through the Northwest Passage.

Mission commander Sir John Franklin died in the summer of 1847, when the ships remained locked in ice.

Evidence suggests that in the spring of 1848, some 105 members of the surviving crew abandoned the ships for King William Island and set out on a long trek south, Parks Canada’s lead archaeologist for the Erebus and Terror survey, Ryan Harris, told Nunatsiaq News last fall.

All members appeared to have died on, or near, the island within the next two years.

Parks Canada believes the fate of the two ships “diverged” after crews abandoned them in Victoria Strait, Harris said.

Inuit testimony and material evidence led Parks Canada to the area of the sea bottom where they found the wreck, Sept. 7. The agency’s next challenge is to figure out how the ship got there.

“How did this vessel enter this little archipelago of islands and end up in this place?” Bernier said at the March 6 news conference. “That’s one of the big questions that came up immediately.”

The wreck’s mysterious location, and Inuit testimony collected over the years suggest “some of the crew were onboard” the Erebus when it came to its final resting place.

“How did it get there? With who, if with someone? What was the state of the crew and what happened afterwards? Was there a second abandonment” with a “second trail of people leaving?” Bernier said.

The next stage of Parks Canada’s investigation, with land-based archaeologists from the Government of Nunavut, will be to gather evidence to answer those questions.

“This is like investigating a crime seen of the past, if you want,” he said. “We’re detectives of the past, and we have to come and set the stage for recording and understanding everything.”

“It’s going to consist of intensive photography and video of the wreck, then we’re going to set up reference points and start mapping,” Bernier said.

Diving gets underway next month, in that 11-day period as part of the broader Operation Nunalivut 2015.

The Royal Canadian Air Force will transport 34 Parks Canada and Navy personnel to the site with ski-equipped aircraft, as well as six Canadian Rangers “for the safety of personnel,” Julien said.