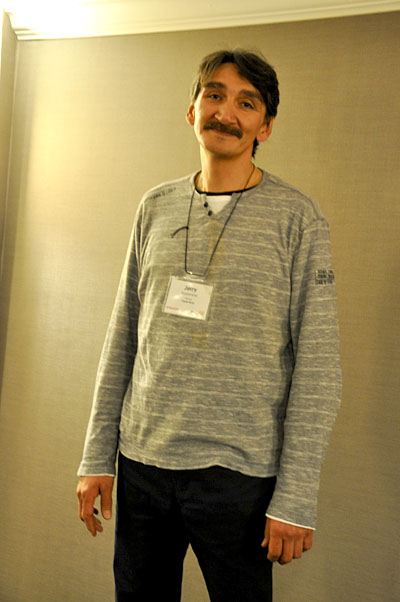 Clyde River Mayor Jerry Natanine in Toronto this past June. Natanine Natanine said Aug. 7 in a Facebook post that he will not contest the Nunavut seat for the New Democratic Party in the Oct. 19 federal election. (FILE PHOTO)

Clyde River Mayor Jerry Natanine will not contest Nunavut for the New Democratic Party this Oct. 19, Natanine said Aug. 7 in a Facebook post.

“My desire to run in the federal election did not work out. I did not get the nomination for NDP MP. Thank you to all those that supported me. Have a great weekend,” Natanine said.

Natanine, known for his aggressive opposition to a now-postponed plan to conduct seismic testing for oil and gas reserves off the east coast of Baffin, declared in early July that he intended to seek the NDP nomination in Nunavut.

But it appears as if he didn’t make it past the NDP’s screening process for candidates.

“The vetting for my nomination is not going good at all,” Natanine said in an earlier Facebook post, on Aug. 5.

The means the NDP is still the only political party in Nunavut without a declared candidate.

“We are still waiting for other [potential] candidates’ applications to be reviewed at our headquarters in Ottawa and hope to announce soon,” said Aaron Watson, president of the NDP’s Nunavut riding association, Aug. 10.

But the party still has lots of time — the deadline for receipt of nominations at the Nunavut returning office in Iqaluit is 2 p.m., Sept. 28.

That’s the deadline set by the Elections Act — the Monday that falls 21 days prior to election day.

To be deemed “officially confirmed,” a candidate’s completed nomination form must be filed with the returning officer for their electoral district.

The requirements include payment of a $1,000 deposit and the submission of 50 signatures from people qualified to vote in the Nunavut federal riding who consent to the person’s candidacy.

The veteran Nunavut MLA and cabinet minister, Hunter Tootoo, is the declared Liberal candidate and Spencer Rocchi will run for the Green party, as a “stand-in” candidate only with no intention of winning.