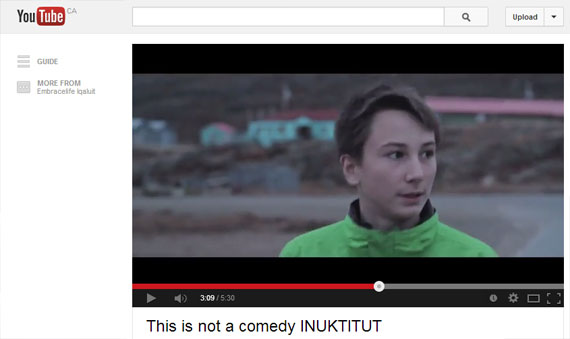 Embrace Life Council’s three new anti-bullying videos have been posted to Youtube. Pictured is a scene from “This is not a comedy” which tackles cyber-bullying. (YOUTUBE SCREEN SHOT)

This is not a comedy, a new video produced by Nunavut’s Embrace Life Council offers a warning to viewers.

In the five-minute film, a teen thinks it’s funny to text private information to friends about a fellow student who has a crush on someone else — information that quickly spreads.

Later, she uses her phone to film the same student getting pushed around in school and posts the video to Facebook, where it gets circulated to most of the high school’s students.

The cellphone-toting student later realizes that what she initially found funny is actually not – hence the name of the video.

“This is not a comedy” is one of three new videos produced and launched by the Embrace Life Council this week, as part of Bullying Week Awareness week across Canada Nov.18 to Nov. 23.

“We were giving workshops and when we were asked, we couldn’t find any resources on bullying prevention,” Guerin said. “We were also hearing stories of stuff happening in some of the schools in Iqaluit.”

So the Embrace Life Council decided to create a made-in-Nunavut awareness campaign. Although the council’s focus is normally suicide prevention, they are also tasked with doing violence and abuse prevention work with Nunavummiut youth.

So Guerin met with RCMP officers, social workers and teachers to get a sense of the type of bullying taking place in Nunavut, information she used to write the three video scripts.

While the first video tackles cyber-bullying, another video takes on social or verbal bullying, which is often where bullying begins, Guerin said.

The opening scene of that video, called “Rumour” shows students whispering to each other in the school hallway.

The narrator, realizing the impact of spreading rumours, wishes she had stopped sharing the gossip she heard from friends.

“It’s like an infection, but the only one who is really sick is her,” the narrator says, referring to the victim. “I should have said something.”

A third video touches on physical bullying. “What’s the Day Today?” features a teen being pushed around in school while other students steal from his knapsack.

Later in the school hallways, he’s pushed into his locker and heckled in the classroom.

The film ends with a shot of another student going to speak to a teacher about the bullied teen.

Then this statistic appears: “57% of the time, bullying stops within 10 seconds of when a peer intervenes.”

Another message encourages teens to speak up and talk to a trusted adult when they encounter any kind of bullying.

The videos were filmed in English, but include Inuktitut subtitles.

While the content is heavy and serious, scenic shots from around Iqaluit are woven into the film — summertime scenes of a sun-lit Frobisher Bay and flowers blowing along the tundra.

“We didn’t want to just stay in the school — we really wanted to show that it was Nunavut,” Guerin said.

All of the videos star local actors — most of them students from Inuksuk high school where much of the filming was done. For many, it was their first time acting on camera.

“They were really happy to take part,” Guerin said. “I think it helped them to see the impact of [bullying] too.”

Embrace Life Council got funding through the government of Nunavut to make the films, part of which was used to bring up an Ottawa producer and director to put the videos together.

Now 100 DVDs of the videos will be sent out to each of Nunavut’s schools, along with a resource guide for teachers to use.