Society is formed, building to come; opening expected in 2019 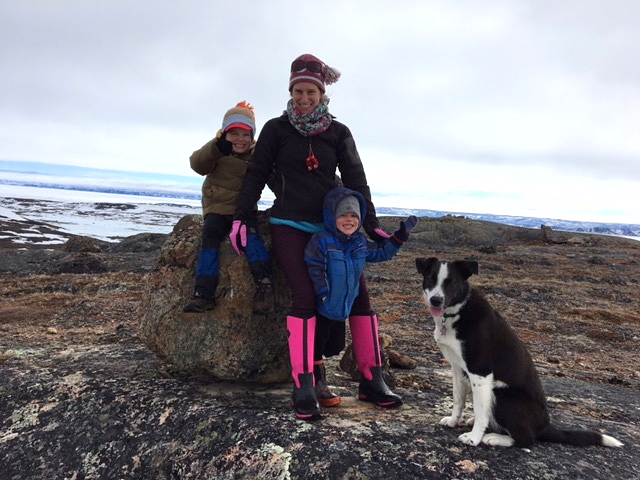 Rachel Théoret Gosselin with her two sons, Henri Théoret-Simard, left, Clément Théoret-Simard, and their dog Halbert. The two boys will be too old for daycare by the time the Tundra Buddies Daycare Society, of which Rachel Theoret-Gosselin is the president, opens a new 60-child daycare in 2019. (PHOTO COURTESY RACHEL THEORET-GOSSELIN)

Rachel Theoret-Gosselin put her unborn son on a wait list for licensed daycare in Iqaluit in 2014. Three-and-a half years later, a spot opened up for him.

Daycare scarcity is a constant struggle for Iqaluit parents.

“It is a big need in town,” Theoret-Gosselin said, adding that many families have had to turn to unlicensed care or live-in nannies brought in from out of the territory.

That’s why Theoret-Gosselin, president of the city’s not-for-profit Tundra Buddies Daycare Society, is pleased to say that a new daycare is coming soon.

The society held an annual general meeting on July 16 to tell members of the public that it will soon be securing a daycare facility with space for 60 children ages infant to five years.

But families will still have to wait for access: expected opening dates are spring or summer of 2019.

When the society started in 2014, “we quickly realized there was a lack of commercial space,” she told Nunatsiaq News July 18. “This was the biggest road block.”

Theoret-Gosselin would not confirm with whom the society is partnering to make daycare space available.

Though in May, the city passed second reading for a land disposal bylaw that will hand over a parcel of land to Indigenous and Northern Affairs Canada to operate a 60-child daycare on the Road to Apex, opposite the entrance to the future Joamie Court subdivision.

“The facility will be secured very soon,” she said, adding that the society is now looking forward to actual operations, such as programming and staffing.

“Our goal is to establish the biggest daycare in town, that would foster an environment of respect and appreciation of the unique environment we are in and the culture of the place.”

Daycare programming would reflect the three official languages of the territory, Inuktitut, English and French. The society is also looking at the possibility of creating an after school program.

Besides programming, licensing and breakdown of spots for each age group, people who attended the AGM wanted to know how soon they could count on the service.

“The biggest question was when. Because the need is now, and urgent,” Theoret-Gosselin said. “This essential service is a building block of a healthy society.”

As for how much a spot will cost, there’s no way to know yet, she said, but noted that cost of staffing and rent will be large factors in the price per child.

She said for many working families, cost isn’t the first concern because right now the service doesn’t exist anyway.

“As a mom, I know when we started this initiative we were struggling with access.”

When daycare operations are in the planning stages, she said the society could look for funding partners to make spaces available for low-income households.