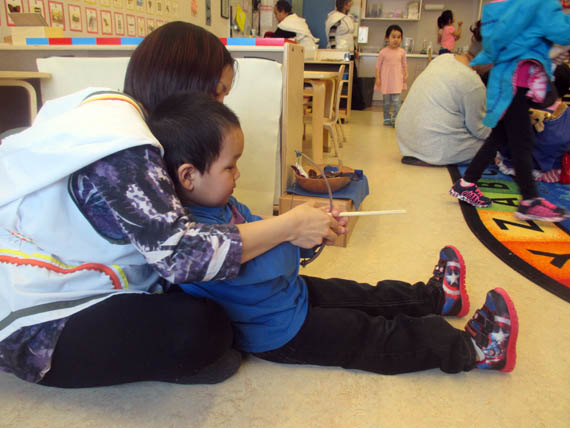 ECE graduate Charlotte Maktar teaches preschooler Mason Angnetsiak how to use a bone bow and arrow. 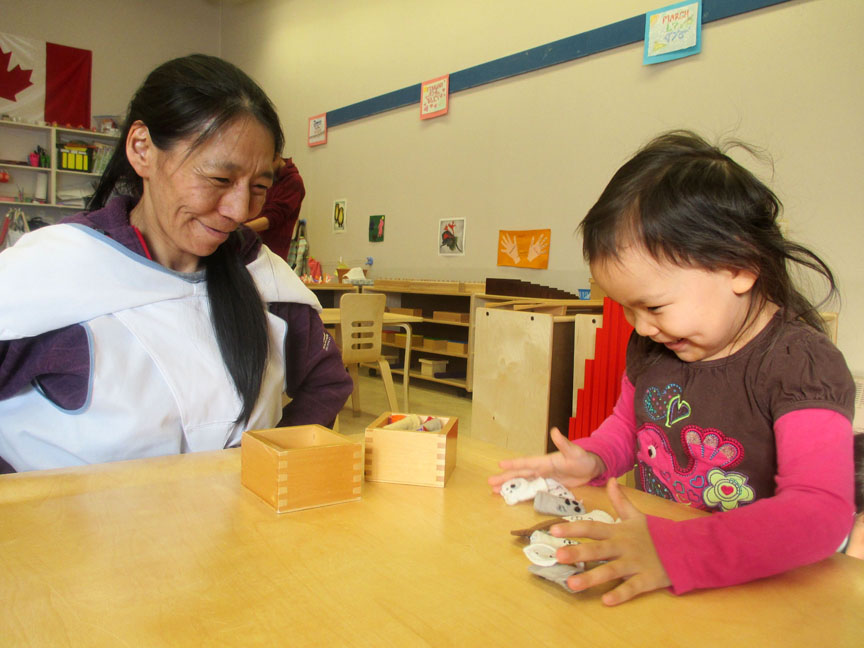 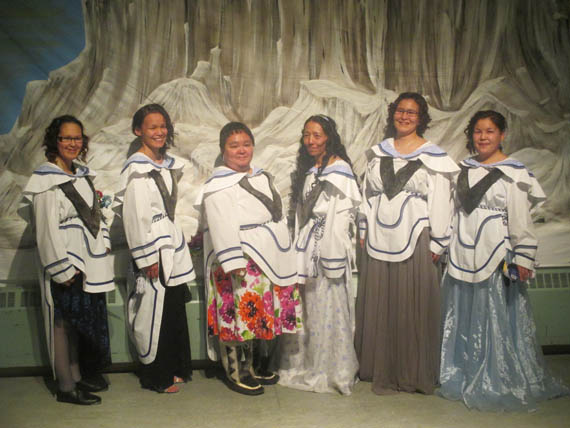 These six Pond Inlet women graduated May 12 from an Early Childhood Education training program offered in their community by Arctic College. From left: Dina Arreak, Ruth Akpaleapik, Fiona Aglak, Leah Kippomee, Samantha Koonoo and Charlotte Maktar. Each woman received a two-year diploma and some will be seeking jobs at the Pirurvik pre-school in Pond Inlet.

Nunavut Arctic College launched the two-year Early Childhood Education diploma program in 2015, the first to be offered outside of Iqaluit.

Samantha Koonoo was one of six graduates on stage to collect her diploma at a May 12 ceremony.

“I kept saying, I’m going to push myself to finish because it’s going to feel good,” she said. “I was amazed with myself.”

Koonoo, a mother of five, said she first enrolled in the Early Childhood Education or ECE program to improve her own parenting skills. She got a chance to put them into action at Piruvik preschool, which opened in 2015 as an extension of the program.

The half-day program ran during the last two years out of a classroom at Ulaajuk Elementary School, welcoming 18 children aged two-and-a-half to four years old.

Koonoo’s youngest daughter attended Piruvik at age three and a half and Koonoo noticed a clear difference in her development compared to that of her older children, who didn’t attend preschool.

“I was teaching her math and how to spell her name, sewing and cleaning up her own mess,” she said. “She wanted to do the dishes herself.”

Piruvik, which means “a place to grow,” closed with the end of the ECE program, but will re-open to the community in September. Koonoo has already been hired as the team leader to three other fellow ECE graduates. She’ll run the afternoon program at the preschool.

That’s good news for parents in Pond Inlet who, like Koonoo, say they’ve noticed their children’s life skills and independence improve significantly, even after just a few months of preschool.

While the ECE program is developed and offered through Nunavut Arctic College, a portion of the curriculum was delivered by local elders.

“We would invite the elders to our class to speak from their experience, both men and women, so the students can understand child rearing from both sides,” said Jedidah Merkosak, the ECE program’s Inuktitut instructor.

Child rearing starts right from pregnancy, she said, with self care and preparing to welcome the child at birth.

Inuit mothers have traditionally carried their babies and toddlers on their backs, in amautiit. Part of that is because it’s an efficient way to transport children, Merkosak said, but it’s also a way to allow parents to bond with their children and to keep an eye on them.

Merkosak said traditional knowledge also helps parents to be perceptive of children’s needs; she remembers her own grandmother teaching her to understand when a baby is hungry or has to urinate or defecate.

Merkosak notes the divide in Nunavut: while traditional knowledge is highly valued, Inuit in Nunavut have received a largely western education through the territory’s school system.

“We were made to feel inferior, told that our traditional way of life wasn’t good,” she said, “and we still feel that way.”

The goal is to teach children to be courteous and responsible right from the beginning, Merkosak said.

“Even if they’re really young, they can learn to be respectful,” she said.

“It’s amazing to hear feedback from parents—they see a difference right away. Their children are more responsible, respectful, calmer and responsive.”

Leah Kippomee, another new ECE graduate, just adopted a baby but hopes to join the team at Piruvik once she’s back to work.

With a background in childcare, Kippomee said she’s most proud to be part of a community-developed and community-based project that empowers local Inuit parents and offers important programming to young children.

“I would really encourage people, especially new parents, to take early childhood education. It teaches you how to raise your children,” Kippomee

There are no plans to offer a second ECE diploma program in Pond Inlet for now, while NAC looks to deliver it in other communities.

But Koonoo hopes with enough interest, the college may consider it.

“I’m hoping they’ll have another ECE [program] in the future,” she said. “Children are amazing when you teach them.” 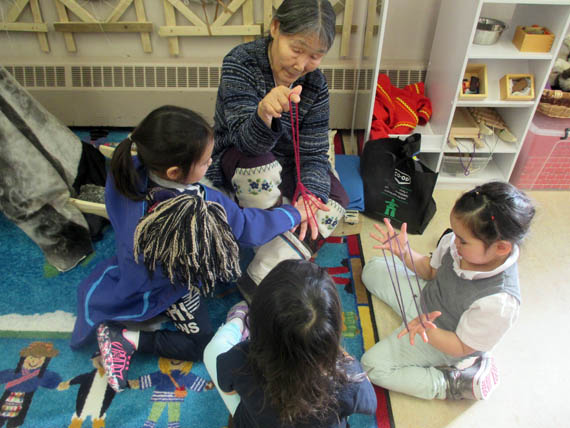