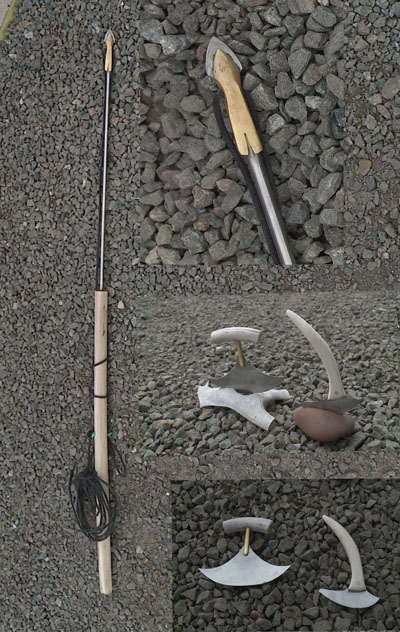 One episode of Uakallanga will feature the work of Iqaluit toolsmith Jerry Ell, who will show viewers how to make these harpoons and ulus. (PHOTO COURTESY OF IBC) 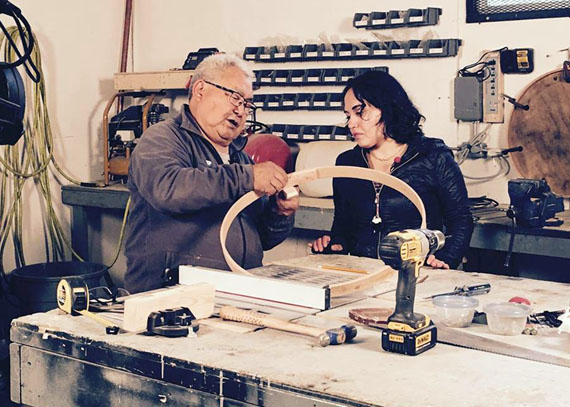 Arviat drum maker David Serkoak, left, shows Uakallanga host Annabella Piugattuk how to fashion the frame of a traditional Inuit drum. The IBC’s newest television series will air in the fall of 2018. (PHOTO COURTESY OF IBC) 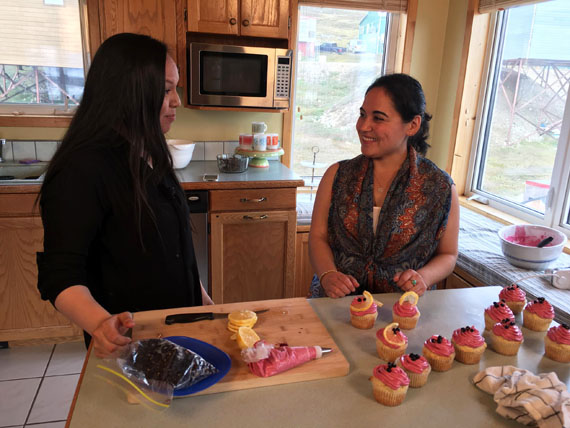 Some days at work can be long and demanding for the Inuit Broadcasting Corp.’s television host, Annabella Piugattuk; other days are a piece of cake.

Like the day she hosted Iqaluit-based baker Riita Strickland, who showed her how to make Labrador tea-infused cupcakes with blackberry frosting.

Piugattuk’s newest gig is a tribute to Inuit resourcefulness and innovation. The IBC’s Uakallanga, now in production, invites skilled Inuit craftspeople to walk viewers step-by-step through the process of making something.

“The talent, whoever that may be, they’re basically teaching me how to do it, from beginning to end,” Piugattuk said. “Then I try it out myself.”

“If it’s cake, I eat it myself,” she laughed, noting that Strickland’s cupcakes were “really good.”

Since the new Iqaluit-based show went into production earlier this summer, Piugattuk has baked; she’s made a traditional Inuit-style drum and fashioned tools such as spears and ulus.

For an upcoming episode, the Uakallanga host will welcome Bernice Clarke, the co-founder of Iqaluit’s Uasau Soaps, which are made with whale fat and local plants and herbs.

“Everything is all hand-made, by and for Inuit,” Piugattuk said. “It’s near and dear to my heart—this is their livelihood. There is no acting.”

The biggest challenge is editing and condensing the day-long shoots into 22 minutes, the length the episodes will run once they air on APTN in 2018.

The motivation behind Inuktitut-language Uakallanga—which translates roughly as “wow!”—is to pay tribute to Inuit skill and talent, but also to teach a younger generation of Inuit how to work with their hands.

“They make things with items that other people might even consider garbage—leftover parts of animals, things from nature. We feel Inuit make things that are very impressive and we want to share that here.”

For Uakallanga’s first 13-episode season, the Iqaluit-based show has mostly hosted Iqaluit-based guests, with a focus on creations typically made in the summer and early fall.

But Cloutier said that, as the show develops, Uakallanga hopes to feature Inuit and their creations from across the territory.

And while the show is filmed entirely in Inuktitut, Cloutier believes it will be visual enough to be enjoyed even by those who don’t understand the language.

Uakallanga is expected to air on APTN in the fall of 2018.