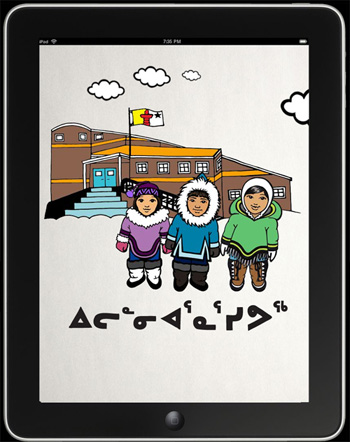 Iqaluit filmmaker Qajaaq Ellsworth’s new app and educational game, Iliarnnarnaqsivuq, or Time for School, is designed to encourage learning among Inuit youngsters. Users choose an avatar, like the ones pictured here, to walk through a day at school, starting from dressing in warm Arctic gear, eating a nutritious breakfast and choosing a safe route to get to school. (SUBMITTED IMAGE)

Young Inuit children are growing up with fast-evolving technology, but some parents fear their traditional language skills just can’t keep up.

That’s what inspired one Iqaluit father to create an educational online game and application software for children in the Inuit language.

Qajaaq Ellsworth, an independent filmmaker and father of two young children, says Inuktitut is very important to his family.

“I have a daughter who is almost four years old, who is very comfortable with technology,” Ellsworth said. “She likes to play with our iPad, but there’s not much access to Inuktitut-language material.”

Ellsworth is developing a tool called Ilinniarnaqsivuq, or Time for School, a learning game geared at youngsters aged 3-7.

Ellsworth first pitched his idea at a DigiCamp, hosted by the National Film Board in Rankin Inlet last fall, where organizers were looking for Nunavummiut who want to learn more about digital storytelling.

With his young daughter at his side, Ellsworth made a pitch for an interactive game that prepares children for the classroom while teaching them about colours, numbers, syllabics, the alphabet, animals and weather.

But what sets Ilinniarnaqsivuq apart from other educational tools is that it’s available to users in three different languages: Inuktitut, Inuinnaqtun and English.

Users may visit a sample of the live app here.

The Inuit-language page presents a list of syllabics alongside Arctic animals. When the user clicks or touches the fish image, they’ll hear the word iqaluk, and then must spell it out using the listed syllabics.

Successful spellers then move onto a page where they can colour in the image they’ve spelled.

From there, users are presented with a page of boys and girls who are avatars representing the three regions of Nunavut, Ellsworth said.

Users choose an avatar to walk through a day at school, starting from dressing in warm Arctic gear, eating a nutritious breakfast and choosing a safe route to get to school.

Once the player’s characters arrive at school, they meet with their teachers and classmates and complete different activities.

Ellsworth said the tool could work both at home or in a school setting.

“I think it will lend itself to both, but I’m looking primarily at use at home for now,” he said. “Eventually, we’d like to adapt the tool to a kindergarten and other classroom settings.”

Ellsworth is working on the app independently, with some financial support from the GN’s Department of Culture, Language, Elders and Youth, as well as the Nunavut Film Development Corp.

Next, Ellsworth plans to go into an Iqaluit daycare centre to record children’s audio for the game, before it goes into its final stage of production.

If it’s any indication of how the app will be received, Ellsworth’s daughter is impressed, he said, and she’s eager to try out the game and demonstrate to others how it works.

Ellsworth expects Iliarnnarnaqsivuq to be available online by April 2012.