“We are going to do many things, it’ll be something that takes place over many years” 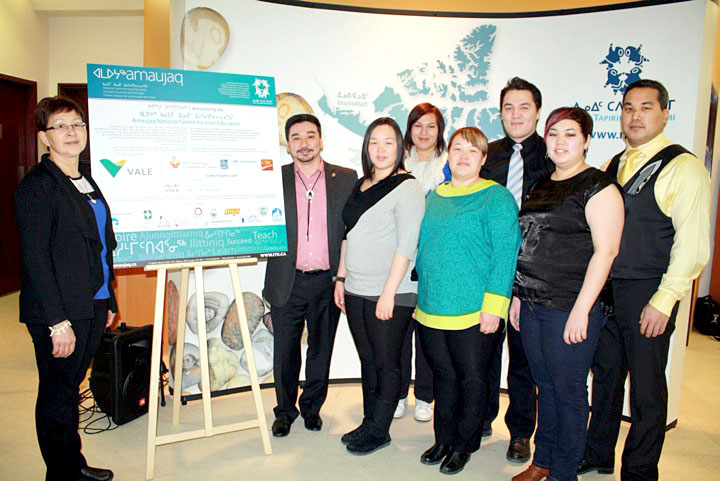 The family of Jose Amaujaq Kusugak was represented by his wife Nellie and children Pujjuut, Aliisa, Alaana and Special at the Feb. 5 opening of the Amaujaq National Centre for Inuit Education. (PHOTO COURTESY OF ITK)

A new centre for Inuit education named after Jose Amaujaq Kusugak, a former president of ITK, opened Feb. 5 at the Inuit Tapiriit Kanatami offices in Ottawa.

The Amaujaq National Centre for Inuit Education’s purpose is is to coordinate the implementation of the recommendations of First Canadians, Canadians First: The National Strategy on Inuit Education, a report released in June 2011.

ITK will work on the strategy and its recommendations, while working with the Inuit regions that have jurisdiction over education, which includes school boards in Labrador and Nunavik, as well as the Nunavut government, said Mary Simon, the chair of ITK’s National Committee on Inuit Education.

“We’re not trying to reinvent the school system. We’re trying to improve the education system. We identified gaps that haven’t been addressed. We are having meetings right now looking at the four priorities that were first identified by the northern leaders,” Simon said.

Those four priorities are: mobilizing parents; investing in early childhood education; measuring the success of the education system through research; and exploring the introduction of a standardized Inuit language writing system.

One NCIE working group will research, assemble and review resources and training programs that promote links between student success and parent engagement.

“It’s not just about how parents need to support their children. It’s not putting the onus strictly on parents. Its about everybody working together to make sure that our education system is working well,” she said.

Another challenge is identifying how to help kids stay in school and eventually graduate from high school.

Also, adequate curriculum for teaching Inuktitut in the higher grades may need to be developed, Simon said.

“This group that is now established is going to be looking at how to recommend how to move forward on whether to standardize Inuktitut writing systems or not,” she said.

However, that decision will be made by Inuit “as a collective group because it’s a very big issue.”

Quite a lot of work needs to be done before it goes back to the national committee.

Early childhood education needs to be linked more directly with the school system, so that children with special needs can be identified as early as possible, Simon said.

That’s kindergarten teachers have a better idea of how to handle students.

ITK, the Amaujaq Centre and Inuit childcare coordinators are creating an online collection of “culturally and linguistically appropriate teaching tools” that will be available to every childcare centre in Inuit Nunangat.

A main purpose of the centre is to help regions develop requests and proposals to the centre and to receive funding for projects and education initiatives.

“It’s a direct benefit to the community,” Simon said.

Working with communities is a priority for the committee.

“We can’t just impose solutions, we have to find them [while] working with the community, we have to take ownership of our education system, to make it what we want it to be like,” she said.

The centre’s opening is important, she said.

“That was something that we had been working on for some time so it was really encouraging to see the opening take place.”

The national committee that developed the strategy will lead the direction of the centre, with Simon chairing it.

She said implementation plans are underway.

“We are going to do many things, it’ll be something that takes place over many years,” she said.

The centre is “within the ITK structure because we didn’t want to a separate organization or a new office, because that takes a lot of money,” Simon said.

She said money should be spent on education, not on administrative costs.

But to kick off the campaign, Simon is going to do community tours in the different regions, hosting town hall meetings and roundtable discussions with community leaders, parents and regional leaders to talk about the importance of education, she said.

Jose Amaujaq Kusugak was represented at the opening by his wife Nellie and children Pujjuut, Aliisa, Alaana and Special.