“I want to make it better, and I want to leave a legacy” 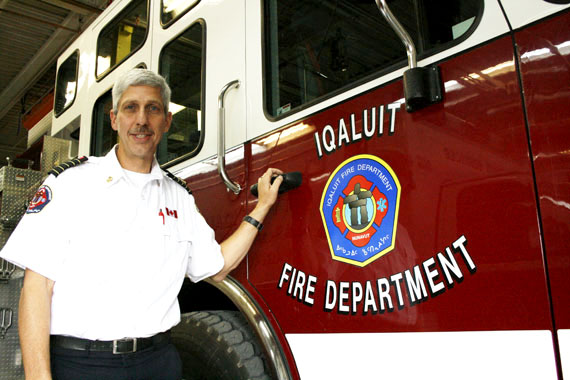 Luc Grandmaison, Iqaluit’s new fire chief, still remembers being a youngster and seeing his father and his uncle, both firefighters, running into burning buildings.

“I’ve been going to fires since I was five,” Grandmasion says with a smile. “I remember going to fire calls with my mom, looking at the fire while my dad was battling it.”

Grandmaison remembers one occasion in particular, when he was nine. Ten feet from his own two-story townhouse in New Brunswick, a massive blaze engulfed a six-plex hotel.

“But basically, my dad knew exactly what to do to protect our house from being burnt down, while this three-story six-plex burnt to the ground,” he said.

Six days later, a fire at another hotel was sparked just down the street. Grandmaison and his uncle were standing by the fire truck at the time.

“I recall him saying to me, ‘pull down the alarm box’ — the red telephone box that you had to pull down to signal a telegram that’s sent to the fire station.”

And when he pulled that switch, he said “the flame was in me all my life.”

Now, at age 48, he brings almost 30 years of experience as a firefighter and a fire chief to Iqaluit, where he serves as director of emergency response and fire chief. He takes over from acting fire chief Blaine Wiggins.

Grandmaison started firefighting in 1984 in Edmundston, N.B., as a volunteer firefighter who eventually worked his way up to fire chief. In 1987, he says he was nominated for the muscular dystrophy firefighter of the year award. For Canadian firefighters, that’s the equivalent of an Oscar.

From 1999 to 2001, he was president of the New Brunswick association of fire chiefs, responsible for 175 firefighters.

And after a spell in Roberval, Quebec, where he started his own training facility for firefighters, Grandmaison said he was ready for a new experience.

“It’s a life-changing experience, that’s all I can say,” said Grandmaison, adding that he wants to live life in the North where both he and his wife can pursue their favoured careers.

Grandmaison has only been in Iqaluit for three weeks, but he’s been doing his homework.

“For fire risks, we have a community that has a high density area. The fire risks are high. And basically, there’s a history of fires are here,” he said.

“Fire loss is pretty high in this community, so we need to address it.”

Like his father, Grandmaison concedes that when major fires do happen, his main strategy is to protect the fire from spreading to other buildings, as if they were his own home.

“If building ‘A’ is burning, my goal is to prevent building ‘B’ from catching fire,” Grandmaison said. “And I think that’s how I’m going to approach our fire incidents, and develop our fire suppression tactics in order to do that.”

Grandmaison already has long-term goals stacked in his mind so a major fire won’t break out or spread in the first place — mostly concerning training and prevention.

“Maintaining skills and the ability to perform a task” is a priority, Grandmaison said. “We need a good training program and drills. The basic firefighting training is already there; it’s just upgrading their competencies.”

To do that, he plans on trying to build a training area for firefighters in Iqaluit.

“We have to have a plan to build it. Staff [is] already looking for what they need for a training area and training grounds.”

Grandmaison also wants to spread awareness through an education program. He says the town needs to invest in “every aspect of fire prevention and detection and suppression.”

And he’s willing to fight for more funding for these projects. He boasts that, as a fire chief for the past 16 years, he’s never gone over budget.

“I think that’s my job,” laughs Grandmaison. “As fire chief, I see what types of human resources and infrastructure we need, but it’s my job to ask for it.”

But for the most part, he said he just wants to enhance the department.

“I want to make it better, and I want to leave a legacy,” Grandmaison said.