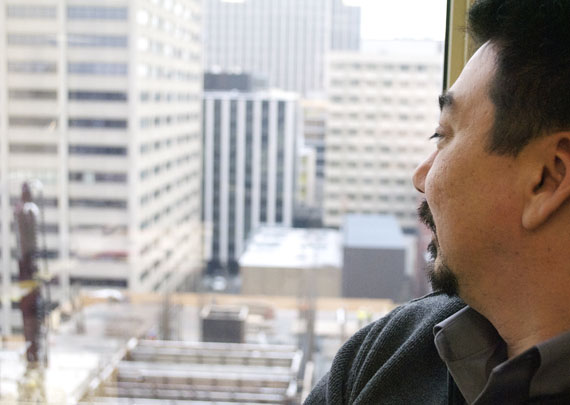 Terry Audla peers through his office window Dec. 13 to view a typical downtown Ottawa cityscape: “I miss the deafening silence. As we sit here right now, we can hear traffic, we can hear construction.” PHOTO BY BRIELLE MORGAN)

Terry Audla, the president of Inuit Tapiriit Kanatami, looks down from his big corner office on Albert Street in Ottawa at a mess of construction and cheerless grey buildings.

Both the crickets and the politics take some getting used to, Audla said.

Since taking over from Mary Simon this past June as leader of the national advocacy group for Canada’s Inuit, Audla’s learned a thing or two about getting work done in the capital.

“In the political world, there’s an amazing amount of sensitivities involved. And being that this is a majority Conservative government, I need to work with them to make sure that Inuit are benefiting from that environment,” he says.

Not only is Audla tasked with bridging the gap between North and South, he’s also constantly trying to find solutions that work for all four Inuit regions.

In areas like education, where he believes the federal government has a mandate but each jurisdiction has it’s own acts and regulations, this can be a real challenge.

“How do you combine all of that and make sure that no one is stepping on each other’s toes and working together for a common cause?”

With respect to education, Audla says that common cause is to increase Inuit graduation rates and participation in post-secondary education.

For Audla, the father of two teenage children, parental engagement is really important.

Given the way traditional Inuit education systems have been overhauled – to put it mildly – this part of the strategy might be the hardest.

“We had a traditional method of educating our children. You educated your children in order to survive in a harsh environment… The current education systems that they have to work within are not reflective of where they are, of where they’re from.”

“It’s a tall order, but we believe it’s achievable. It’s a matter of how we get the jurisdictions to work together and establish a true working relationship between the parents, the educators and the legislatures.”

Audla says education is a top priority for 2013. Another big priority is ensuring that Inuit capitalize on northern development projects like the Mary River mining project.

“There are land claim requirements that need to be followed to ensure that resource development is done in a responsible manner, and that Inuit are participants, full participants.”

Audla recognizes that while such projects promise jobs and royalties, they may also involve radical changes to Inuit lifestyles. He points specifically to Pond Inlet – a community that has both high unemployment and close proximity to the Mary River project.

“Here’s a huge opportunity, so you’re going to have seasonal workers going in (doing) two-week rotations: two weeks in, two weeks off… being away from their families… how do you balance all of that?”

He thinks about it before answering his own question.

“Inuit need to come to the table and be prepared. How you prepare them for that is another interesting exercise to go through.”

While Nunavut’s mining frontier continues to attract international attention, so does the practice of harvesting polar bear and seal.

Just last week, Audla went to battle before a roomful of European parliamentarians in Brussels, Belgium. He spoke to the American proposal to up-list polar bears to the endangered category reserved for species under threat of extinction.

This up-listing could prohibit Inuit from trading in polar bear products.

“The suggestion that the polar bear is in danger because of climate change is disingenuous… We’ve been trying to suggest that the Canadian model of management of the polar bear is one to uphold and to have it adopted by the U.S., Russia, and Denmark.”

Audla hopes the Europeans will reject the proposal – again. This marks the second time the U.S. has proposed elevating polar bears from Appendix II to Appendix I on the Convention on International Trade in Endangered Species listing. The first time was in 2010.

Audla feels the Inuit perspective on the big white bears was well-received by the Europeans. He’ll find out when CITES member countries cast their votes in March, 2013.

Meanwhile, Europe is also deciding whether to uphold the ban on seal products.

On November 20, ITK delegates made their case for reversing the ban at the EU’s highest court. For Audla, the verdict can’t come fast enough.

“I remember growing up in Resolute where you saw proud family units. They lived in the traditional manner: they hunted seal and they relied on seal, and the by-product, the pelt, would be sold off for a good price.”

“All of a sudden these proud families ended up having to go to the government for handouts… It’s sad that the world imposes that kind of lifestyle. It’s based on emotions and not on scientific fact.”

Audla recognizes that many Inuit families are struggling nowadays to put food on the table.

He supports nonprofit organizations like Feeding My Family, which promote awareness, posting photos of sky-high prices on Facebook and organizing demonstrations.

As for the government’s subsidy program, he’s got some more thinking to do.

“Is Nutrition North doing the right thing? Jury’s still out in my opinion. But Inuit need to take control of what they’re feeding their families.”

With so many issues to tackle, it’s a wonder Audla gets any sleep – especially in noisy Ottawa.

“I miss the deafening silence. As we sit here right now, we can hear traffic, we can hear construction, we can hear all of that. And in the summer, it’s the crickets and the frogs. But in the North, it’s just silence… it’s an amazing feeling.”

The transition to Ottawa for Audla and his family hasn’t been an easy one.

“I’ve been involved in Inuit politics since ‘93 and there’s been a few times where I’m thinking, ‘What is this all for?’ You can get jaded in a sense, but I’m in a position where I can’t afford to do that.”

Audla says growing up in tough 1970s-era Resolute Bay gave him the confidence he needs to be a good leader. But the leadership quality he holds above all else?

“If you’re able to admit to your mistakes and learn from those mistakes then you’re that much better of a leader, you’re that much more prepared. You can’t be tyrannical,” he says, thumping the long boardroom table with his fist.

“And you need to work with people.”