New NFB collection includes 24 films on or by Inuit 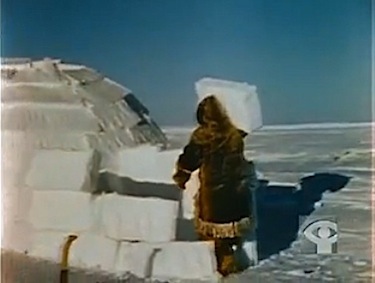 “How to Build an Igloo,” a 1949 short film by Douglas Wilkinson, is included in the new “Unikkausivut” National Film Board collection, launched Nov. 2 in Ottawa.

Now you can learn how to build an igloo, learn how the first successful co-operative in an Inuit community started or what life is like for youth today in a Nunavik community.

The lessons contained in a new National Film Board collection of films about Inuit and by Inuit make for good watching.

The DVD collection, called Unikkausivut, includes some of the best short works from the NFB’s archives of documentaries and animated films.

The Unikkausivut‘s collection of 24 films, launched Nov. 2 in Ottawa as part of Inuit Tapiriit Kanatami’s 40th anniversary celebration, represents “a unique audiovisual account of the life of the Inuit—an account that should be shared with, and celebrated by, all Canadians,” the NFB says.

The Government of Nunavut, which helped fund the project, will distribute boxed sets of the films to every school in Nunavut.

Some 53 communities across the North will also receive Unikkausivut sets.

Members of the public can buy also buy Unikkausivut for $49.95.

The NFB, in collaboration with the Inuit Relations Secretariat of Aboriginal Affairs and Northern Development Canada, the GN, and regional Inuit organizations, selected more than 40 films from its collection which represent all four Inuit regions in Canada: Nunatsiavut, Nunavik, Nunavut and Nunakput.

Zebedee Nungak, director of the Inuktitut language department at Nunavik’s Avataq Cultural Institute, served as one of the Inuit advisors on the project, which had a total cost of about $1 million.

Nungak came up with a name for Unikkausivut, which means “sharing our stories.”

A project history on the NFB website says the idea behind Unikkausivut came out of from a NFB screening at the Museum of Civilization where Nunavut MP Leona Aglukkaq mentioned her memories of watching NFB films during her childhood.

“They are wonderful films. It would be great if we could see them again now,” she said.

But during the 1970s, a new kind of Inuit film began to emerge, the NFB notes, and since 2000, Inuit filmmaking has continued to grow.

To order a set of Unikkausivut or see film clips, go to the NFB website for the project.

On Nov. 7 at 2 p.m., Unikkausivut will be presented to Nunavut legislature by Premier Eva Aariak and Tom Perlmutter, the federal film commissioner and NFB chairperson.

This will be followed by a public première, sponsored by Nunastar, the Frobisher Inn, First Air/Air Inuit and Adventure Canada, at 6 p.m. in the Astro Theatre.

Aariak and Perlmutter will also announce an agreement between the GN the NFB to package 34 films from the Tuktu and Netsilik Eskimo collections, which, according to a Nov. 4 news release, will be “permanently accessible to young people in Nunavut schools for generations to come through the territory’s educational network.”

Unikkausivut will première in Kuujjuaq on Nov. 8, and school screenings are also planned.