“We asked ourselves the question: what would an Inuit map of the Arctic look like?” 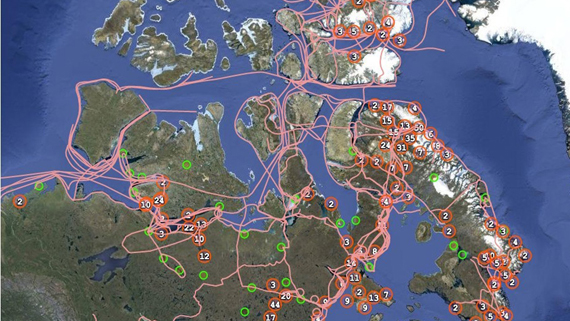 Here’s a view of the many trails documented as part of the Pan Inuit Trails project, which gathered information on historical travel routes from Inuit elders. (PHOTO COURTESY OF PAN INUIT TRAILS) 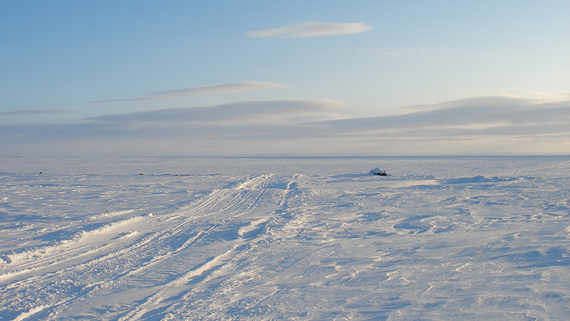 Many centuries-old trails are marked by little more than flattened down snow, re-created along the same route each winter. (PHOTO BY CLAUDIO APORTA)

Paingut Annie Peterloosie once drew lines on a map to mark the many routes she used to travel along the sea ice north of Baffin Island.

The Pond Inlet elder, who passed away in 2011, noted trails that Inuit in the region have been using for centuries.

“The way she moved was with such precision,” said Michael Bravo, a geographer at the University of Cambridge. “She had the skill of moving like an Inuit seamstress, except it was across the Northwest Passage.”

Bravo and his colleagues changed their notion of travel through the vast territory after looking in detail at the crossing routes that Peterloosie and other Inuit elders had mapped out — either orally or on paper.

“While many associate a single, squiggly line with the Northwest Passage, Inuit elders showed us, with great precision, how those trails intersect and join places where Inuit have lived,” he said.

The Pan Inuit Trails project was published earlier this week, documenting thousands of kilometres of historical routes across Nunavut and hundreds of traditional Inuit place names.

“So we asked ourselves: what would an Inuit map of the Arctic look like?” he said.

The project is put together by many of the same researchers who created the Siku atlas, another online resource that documents traditional Inuit knowledge of the territory’s sea ice.

One of the atlas’ co-authors, Claudio Aporta, an associate professor at Dalhousie’s Marine Affairs program, first took an interest in Arctic trails when he was travelling with hunters in Igloolik in 2000.

When he returned to Igloolik to upload his GPS information on a computer, he noticed there were tracks.

“The hunters explained they were trails they’ve been using for years — most of them as old as they could remember,” Aporta said. “And they’re basically flattened-down snow, which melts, but they create the same trails in the same location (each year.)”

Aside from old maps created by or for early European explorers or traders in the region, many of these trails are etched in the minds of their users.

In gathering his research, Aporta said Inuit would often close their eyes and remember rocks or other features of the landscape that helped define the routes they travel so often.

Among his favourite trails: a well-worn route between Igloolik and Repulse Bay introduced to him by Maurice Arnatsiaq and his family, which winds over open tundra and frozen lakes.

While many of the same routes have been travelled for centuries, researchers noted some had more recent changes. Climate change, or the fact that sea ice is forming later and breaking up earlier, has created deviations or detours from original routes, depending on their location.

While the atlas is not an exhaustive list of traditional Inuit trails, it does offer proof of Inuit historical and modern-day presence in parts of the territory that would otherwise appear uninhabited to southerners.

And that gives the atlas geopolitical importance in Canada’s case for sovereignty over the Northwest Passage, Bravo said.

The occupation of Canada’s North is generally under-researched, he said, noting that academics haven’t really explored how oral tradition fits into law.

While the project focuses mainly on Nunavut, researchers hope to eventually gather more information on routes in the western Arctic, Nunavik and Nunatsiavut.