New preschool a “place to grow” for Nunavut community

“They’re learning at their own speed” 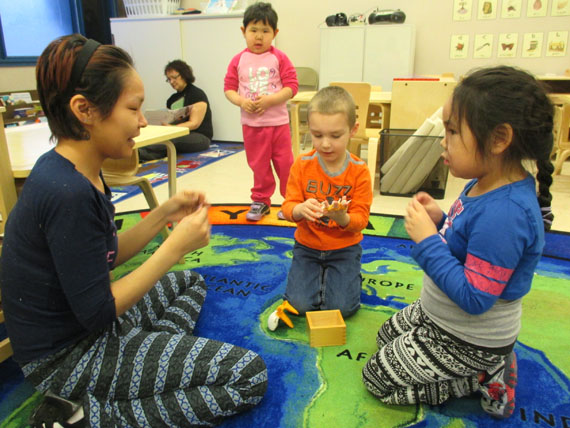 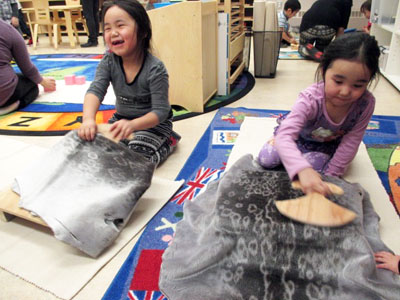 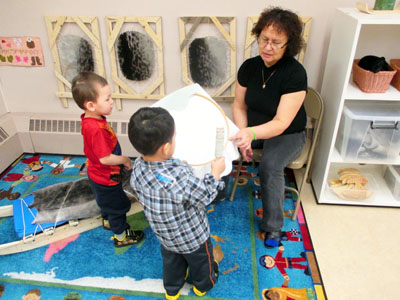 That is, until something recently clicked for the young Pond Inlet woman.

“A couple of years ago, I tried to go back to high school but I found it too distracting,” said Maktar, mom to two children, aged six and two. “So I dropped out.”

“I was jobless, and then [a former teacher] told me this course was opening soon.”

But the program’s reach is much broader.

As an extension of the program, the college opened the doors to the Piruvik preschool earlier this month out of a classroom at Ulaajuk Elementary School, welcoming 18 children aged two and a half to four years old.

Piruvik means “a place to grow.” The room, provided by the local DEA, is already colourful and busy, filled with furniture and play centres set up in each corner, with a clear focus on Inuit culture.

Children can do traditional activities, like build their own qamutik, scrape seal skin with wooden ulus, sing or read in Inuktitut or prepare lunch at a kitchen area.

The new preschool program goes hand-in-hand with the ECE diploma, offering those students a space to do their practicum, and eventually, a potential job.

Maktar began her practicum at the preschool last week, teaching “practical life activities,” she explained, like how to pour a pitcher of water, wash a table and tidy up the kitchen area.

“It’s a whole lot easier to understand and interact with children now,” she said. “Especially when they’re fussy and they can’t explain how they feel.”

That means a lot to the young mother. Maktar’s own two-year-old stays home with her grandfather during the day, but she hopes her daughter will eventually attend the preschool.

“What I’m looking forward to is we’re kind of [preparing] the preschoolers to go to kindergarten,” she said. “We’re keeping them excited about learning.”

There is another daycare operating in Pond Inlet, but it doesn’t offer the same programs geared to preschool children.

This new program fills a number of gaps in the community, said Karen Nutarak, an adult educator at NAC’s Pond Inlet campus and co-director of the new Piruvik preschool. It promotes education, employment and support for preschool children, she said.

Nutarak said the idea grew from conversations with a friend, local educator and Piruvik co-director Tessa Lochhead, who has taught at Pond Inlet’s elementary and high schools for the last nine years.

Lochhead had introduced Nutarak to the education approach used in Montessori preschool education, which promotes a child’s independence and freedom in the way they learn — academically and socially.

“We agreed that it’s like Inuit Qaujimajatuqangit, in terms of how Inuit learn by watching,” Nutarak said.

“Boys would watch their fathers build a qamutik and later that would play and build their own qamutik.”

Piruvik has implemented Pilimmaksarniq, a principle of IQ that allows children to learn at their own pace.

“Pilimmaksarniq is in our own values,” Nutarak said. “So they’re learning at their own speed, not having a teacher standing over them.”

It’s only been two weeks since Piruvik opened its doors, and the college will continue to adapt the program as students develop their skills and take on more ownership, Nutarak said.

“Some kids are singing at home in Inuktitut, or identifying shapes,” she said. “One parent said their child’s speech has improved.”

In the preschool’s third year, 2017-18, the first successful graduates of the ECE program will be able to seek permanent employment at Piruvik.

“I’m really thankful for a chance to learn,” Maktar said, “and for something that will help the community.”