University of Saskatchewan project will focus on northern lights 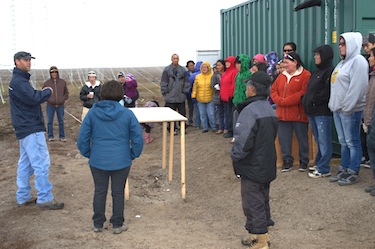 A group of people from Clyde River listen to engineer Jan Wiid speak about the radar towers installed near their community which will help track “space weather.” (PHOTO BY SHARI GEARHEARD)

The rain didn’t bother a group of Clyde River residents who came out earlier this month to learn more about the new radar towers set up near that community’s airport.

There, University of Saskatchewan researchers have set up an array of radar towers, part of an international effort to study “space weather” — that is, the changing atmospheric conditions, which particularly affect astronauts and satellites in space.

The data gathered by the radar towers will increase understanding of the northern lights and other types of dangerous electric currents produced in space, said engineer Jan Wiid as he led people through a tour of the towers, which were installed over the summer by an engineering and technical team.

The towers track the movement of electrically-charged particles, which can knock out electric power grids, destroy communications signals, such as the Internet, radio and television, affect GPS positioning and increase radiation dosage to airline pilots and passengers.

Last March, a powerful solar storm of magnetically-charged particles, did not disrupt power grids or satellite communications as some feared.

But it did produce a display of bright green northern lights.

During the tour of the new towers in Clyde River, Wiid explained how these towers use radar to measure particles in space.

Those on the tour also learned how the towers were constructed and took a peek at the computer equipment stored in a nearby sea container.

The project, known as PolarDARN (Dual Auroral Radar Network), will operate in Clyde River for at least 10 years.

The Clyde River station is linked to similar stations in Inuvik and Rankin Inlet, and to other radar installations in Resolute Bay and around the world.

PolarDARN plans to work with the Ittaq Heritage and Research Centre in Clyde River and exchange knowledge with elders about northern lights.

At least one Clyde River resident will also help to monitor the site and assist with maintenance.

Data from the site is available online.

with files from Shari Gearheard in Clyde River