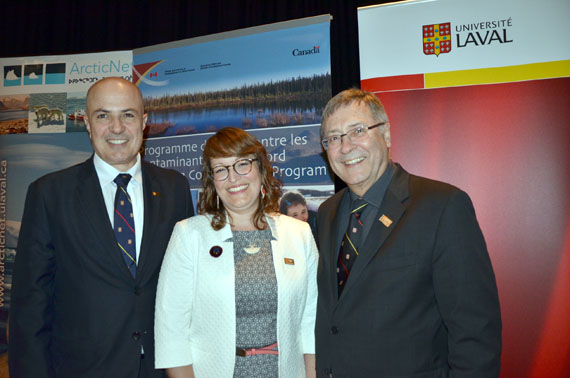 From left to right: Éric Bauce, executive and development vice rector at Laval; Mélanie Lemire, the new Nasivvik Chair in Ecosystem Approaches to Northern Health; and Renald Bergeron, dean of the faculty of medicine at the Université Laval pose for a photo June 16 at the 2016 Northern Health Forum in Quebec City. (PHOTO BY DAVID MURPHY)

QUEBEC CITY — Contaminants from the South continually stream into the North, affecting the safety of country foods, foods which are normally of “exceptional quality,” says Université Laval researcher Mélanie Lemire.

“We cannot say it enough. Country foods are hundreds [of] times better than highly transformed food that we find in the supermarket,” said Lemire who will lead the new Nasivvik Chair in Ecosystem Approaches to Northern Health at Université Laval.

The university announced June 16 at the 2016 Northern Health Forum in Quebec City that Lemire would fill that position.

Part of her job: to study contaminants brought north by air and ocean currents.

“The [research] chair itself, it’s some money to consolidate our team’s efforts on country foods with respect to environmental health issues in Nunavik,” Lemire said.

Other objectives her work will include studying:

• diseases transmitted to humans from animals and other infectious agents;

• effects on human health and contaminant-nutrient interactions in food;

• the chemical and micro-biological quality of drinking water and local foods; and,

• the impact of climate and ecosystem changes on local food systems.

Lemire has a foot in many doors: She’s an assistant professor with the department of social and preventive medicine at the Université Laval and a researcher in population health at the CHU de Québec-Université Laval research centre.

That means she’s helping with the second edition of a major health survey in Nunavik this year called Qanuippitaa.

Lemire plans on engaging youth with the new research projects she’ll help develop, much like she did three years ago with the Purple Tongue pilot project, which studied the health benefits of berries in Nunavik.

Lemire already has plans for some new research project themes, too.

“Trying to understand the effect of climate change at all the different steps at the marine food web — from phytoplankton to beluga or seal — and how this will translate into possible impacts on food,” she said.

This type of research coupled with community engagement is Lemire’s specialty — not just because she’s been researching in almost every Nunavik community so far, but also because she’s already done it in the Amazon as part of her PhD research.

“The Amazon and Nunavik are quite similar. People have an exceptional knowledge of their environment. They are also living several challenges at the same time — dietary transition, political issues, colonialism, social crisis.”

“So we were having a positive message, reinforcing local foods. But also I was looking at the benefits of some [other] foods like Brazil nuts, how they can counteract the effects of mercury,” Lemire said.

Lemire recently found selenoneine, an antioxidant similar to an element in Brazil nuts that counteracts the toxic effects of mercury effects, which is also found in maktaaq and in blood samples from Inuit.

Her research is ongoing.

Lemire said her new chair position has been an idea for about nine years, dating back to when well-known Laval researcher Dr. Éric Dewailly was a leader in circumpolar research on environmental and human health.

And Lemire said she wants to continue her research the way Dewailly did it.

“He was a dreamer. He was the one who first dreamed to do research on a boat in the North.

“He was this kind of crazy person with great and inspiring ideas. Some of them were realistic, others less. But I hope that kind of willingness to see outside the box will stay there,” she said.