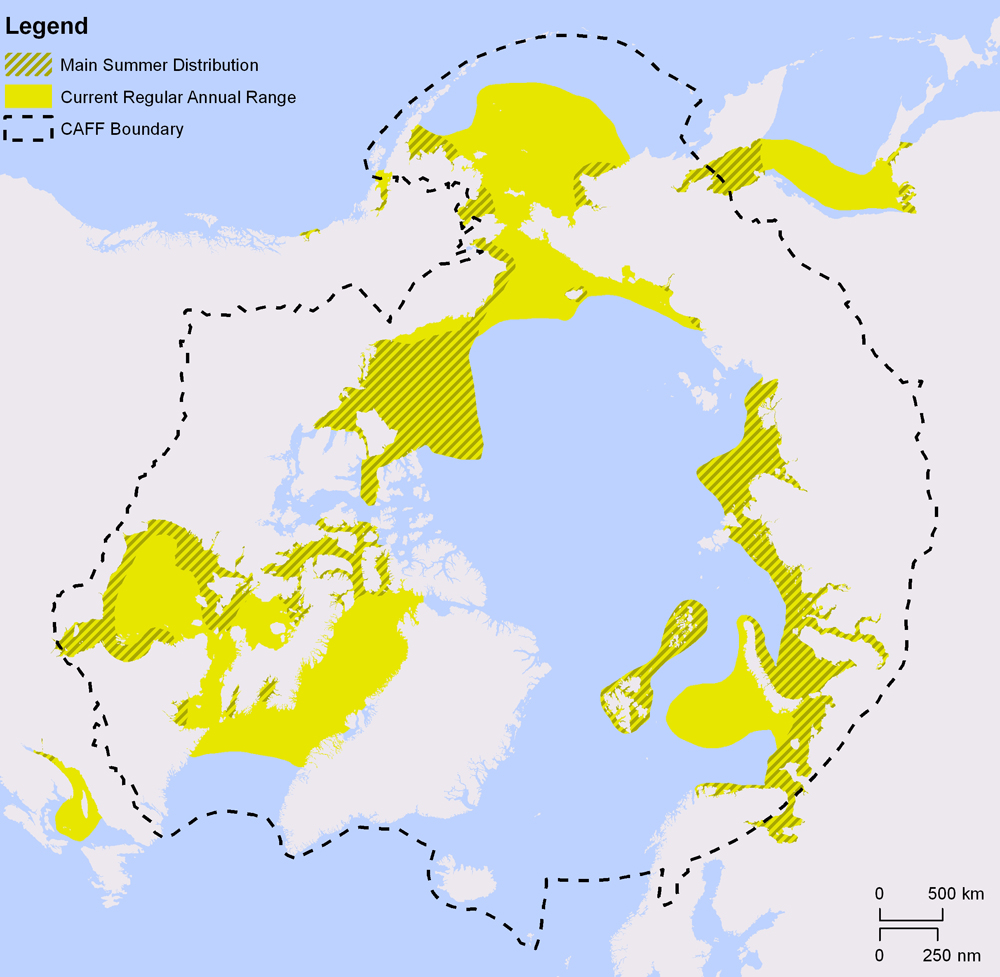 This map shows the regular annual range of the beluga in yellow, while the striped areas indicate the beluga’s maid summer distribution. (IMAGE COURTESY OF WWF) 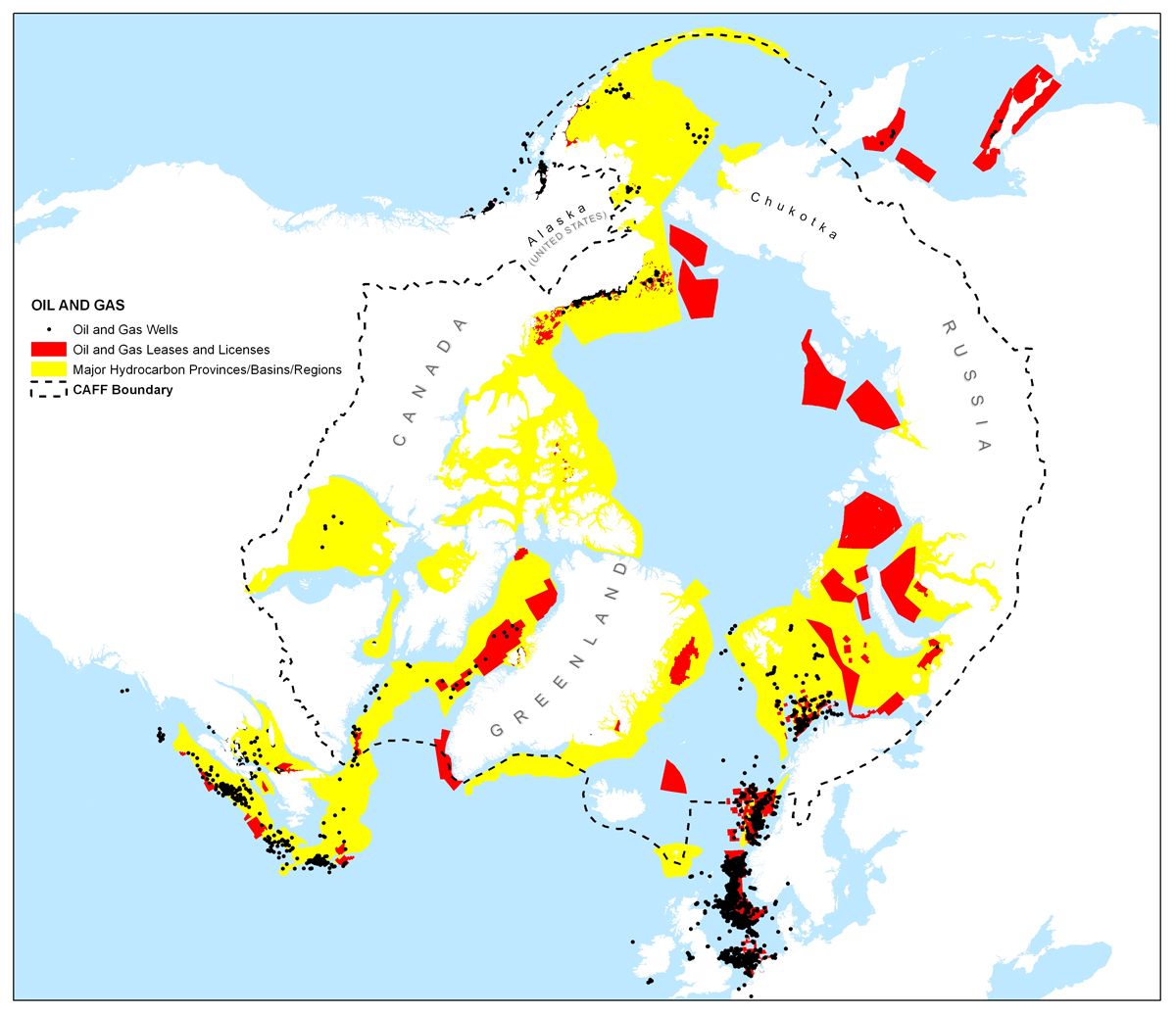 The areas in yellow show major hydrocarbon basins in the Arctic, where there are significant oil and gas deposits. The red indicates areas that governments have already leased or licensed for exploration. (IMAGE COURTESY OF WWF)

As shipping and oil and gas development ramp up across the Arctic, so too have the impacts of those activities on Arctic whales and the Inuit who hunt them.

A new World Wildlife Foundation-sponsored paper published in the journal Marine Policy shows the extent to which Arctic development has come to overlap with whale habitat and calls for better protection of those areas from exploration and shipping.

The WWF, along with a number of experts on Arctic whale research and conservation from around the world, pooled data on where bowhead whales, belugas and narwhals spend their time, particularly throughout the summer months.

“And 60 per cent of the current habitat of these whales overlaps with oil and gas and shipping interests,” said Peter Ewins, an author of the paper and an Arctic whale specialist at the WWF.

“This [paper] is really trying to raise awareness of what’s coming,” Ewins said. “Oil and gas exploration is risky business — it’s good for the economy, but it’s bad for the whales. We have to plan wisely.”

Ice-adapted whales are already stressed by climate change in the Arctic, Ewins said, which is allowing killer whales to move into their territory, where they prey on whales and those animals’ food sources.

“And now on top of that, industry is on their doorstep,” Ewins said. “Because of the threat of oil spills, it’s pretty clear that there are major risks associated with oil and gas exploration in these areas.”

“We’re not opposed to economic development — it’s all about planning it so you don’t do the wrong activity at the wrong time and place,” he added.

In Nunavut’s case, Ewins points to the Baffin Basin, considered a major hydrocarbon deposit, an area where industrial activity may overlap more than 60 per cent of the local whale habitat.

The paper not only identifies and maps the areas of potential conflict, but also suggests how such conflicts can be reduced in a future Arctic with increasing open-water areas.

It’s not only about making certain areas off-limits, Ewins said — in some cases, slowing ships as they enter highly sensitive areas could help reduce impacts.

In areas that whales only use at a certain time of the year, development could be slowed during those periods, he added.

The paper also calls for the strict regulation of seismic surveys and other sources of loud, underwater noise.

“I think our conclusions are very much in sync,” Ewins said. “We expect that governments will actually do what they’ve committed to do.”

But Ewins said the recommendations laid out in this paper are targeted at the federal government, calling it “constructive research at the right time.”

The paper also argues for better monitoring of the whales’ responses to disturbance, in order to determine more precisely the animals’ sensitivity to human activity.

While Inuit communities play an important and ongoing role in that monitoring, Ewins points out that whale migration patterns take the animals far from coastlines for large periods of the year, making it difficult to track them.

He’d like to see more surveys like the aerial one carried out by the Department of Fisheries and Oceans this past summer, which flew over Nunavut’s Arctic archipelago photographing whales.

There are 17 different whale species, including dolphins and porpoises, in the Arctic.

Some live in the Arctic all year round, such as narwhal and beluga, and some, such as humpback and gray whales, migrate to the cooler Arctic waters during the northern summer to give birth. 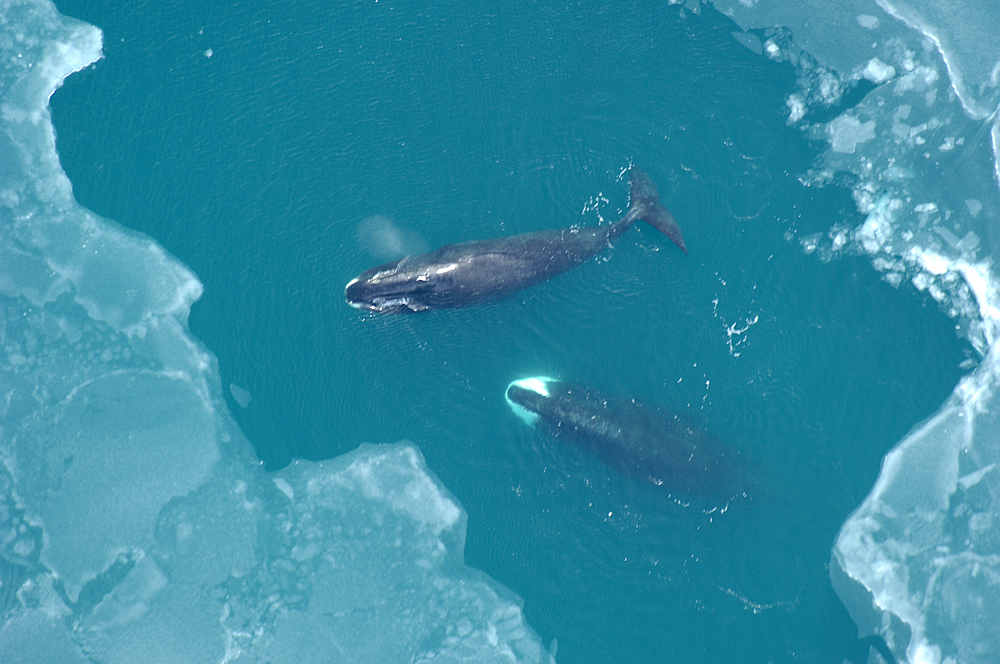 As the Arctic sea ice cover decreases, bowhead whales are losing their territory to killer whales. (IMAGE COURTESY OF WWF)