Mercury ends up in the Arctic food chain from the South, Asia 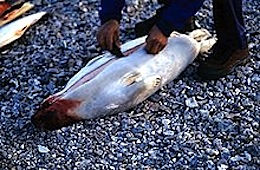 A new study has pointed to a link between mercury consumption and ADHD. (FILE PHOTO)

Pregnant women in the North now have one more reason to avoid eating mercury-laden foods like ringed seal liver or beluga meat, according to a study recently published in the journal, Environmental Health Perspectives: it may lead to their children developing the set of behavioral problems known as Attention Deficit Hyperactivity Disorder, or ADHD.

The disorder’s name might sound complicated but many Nunavut and Nunavik parents and school teachers are probably well aware of the effects. Children with ADHD exhibit violent and impulsive actions, have trouble concentrating in school and may act aggressively towards their teachers and classmates.

“ADHD is the most frequent behavioral problem reported for children all over the world,” said Dr. Gina Muckle, a Laval University researcher and co-author of the Environmental Health Perspectives study on the link between ADHD and mercury. “And we know that the number of children with ADHD is increasing.”

Her latest study, using subjects in Nunavik, shows that children with high concentrations of mercury in their blood at birth were about three times more likely to exhibit behavior characteristic of ADHD. The researchers also found that exposure to lead at a young age is correlated to behavior consistent with ADHD.

Muckle has spent nearly 20 years studying the effects of toxins like mercury and lead among people in Nunavik and has also worked closely with local officials to reduce the risks of such contaminants.

For example, she worked with the Nunavik Regional Board of Health and Social Services to put a voluntary ban on lead bullets. That initiative was successful, and Muckle’s research has shown that blood lead levels of individuals across Nunavik has dropped.

But frustrating local efforts is the fact that contaminants like lead and mercury know no boundaries.

“The mercury that we find in the North is coming mostly from China and other developing countries that are burning coal for the production of energy,” said Muckle. “Emissions then travel through the air and reach the Arctic.”

Other research has found Arctic rivers dump mercury into the Arctic Ocean.

There is some good news. The United Nations Environment Programme has an ongoing effort to address the issue of mercury emissions and aims to reach an agreement by 2013. Canada, the United States and China — and the Inuit Circumpolar Council — are all involved in these negotiations.

But still, the situation in the Arctic is discouraging. Canada’s domestic mercury emissions have dropped by 90 per cent in the past 30 years. Yet more than 40 per cent of the mercury deposits in Canada are presently coming from coal being burned in other countries, namely China.

And neither does ADHD. Fifty years ago the disorder was practically unheard of. Now, some 10 percent of children around the world have it, she explained. “It’s not a rare problem,” Muckle said.

Of course, a certain amount of aggressive behavior has always existed in children. And more researchers are now looking for disorders like ADHD, which may explain to some degree why it is being more widely reported. Nevertheless, the issue is a serious one, said Muckle.

Aggressive behavior may have helped an Inuit child two or three generations ago, she said, but it has no place in the modern world.

“It was different 60 years ago in the nomadic period where those children likely would have been successful in some ways,” said Muckle. “Now children must spend many hours a day a in school. This kind of environment puts children who are more aggressive and active in a difficult situation.”

What’s a mother to do about it all? Muckle recommended two things.

Pregnant women and women of childbearing age should avoid consuming beluga meat, which has particularly high concentrations of mercury. And nobody should be using lead bullets.

“It is very easy in a very short period of time to decrease the amount of lead a child is exposed to,” said Muckle.