“A profound tool for reversing discrimination” 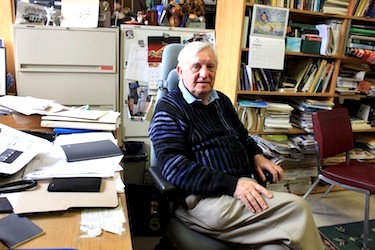 OTTAWA — About 25 kilometres southeast of Arctic Bay, on the northern shore of Adams Sound, there is a place called Qajuutinnguaq. It means “Hill shaped like a chisel.”

You wouldn’t find it on most official maps because official maps of Nunavut contain huge swaths of unnamed land. And most of the place names that do exist were given by colonial explorers to honour foreign kings and dignitaries.

But a geographer from Carleton University in Ottawa is trying to decolonize those maps by helping Inuit officially name the places around their community with traditional, Inuktitut names using free software that he invented.

And the work of Dr. Fraser Taylor just got a big boost. With a $516,323 grant from the Canada Foundation for Innovation, and an expected matching grant from the Ontario government, Taylor hopes to improve computer hardware and software so that more northern communities can map their world, their way.

“Our multi-media cybercartographic techniques fit so well with the oral culture,” Taylor said, during a recent interview at his Carleton office. “Print is totally inadequate to capture the storytelling traditions.”

Taylor, an award-winning and world-renowned geographer at Carleton Geomatics and Cartographic Research Centre, coined the term “cybercartography” in 1997 to describe a new form of multimedia, interactive atlas.

Basically he created a powerful online tool called Nunaliit (http://nunaliit.org/) that allows anyone to map just about anything in a very unique way—using not just maps and text but audio, video, photographs, graphs and any other form of information that helps viewers understand the place.

For instance, on the Arctic Bay Atlas, you can click on Qajuutinnguaq and find not only photographs of the place and an Inuktitut audio clip, but a memory of the place uploaded by a user.

“When I was in grade 5, my classmates and I were spending the weekend there,” one person wrote. “We went climbing, walked around the area, played baseball and soccer, stayed up late at night.”

The new money will pay for much needed hardware replacement and also upgrades to Nunaliit which has been used to map many things, from the risk of urban homelessness in southern Canadian cities to snowmobile trails.

For his northern work, Taylor teamed up with Claudio Aporta, an associate professor in Carleton’s Department of Sociology and Anthropology who specializes in northern indigenous knowledge. With Aporta’s connections, and a host of northern partners including Nunavut Arctic College, they helped Inuit create several online atlases that allow users to experience Nunavut from the inside out.

Taylor says its crucial to record that perspective now: language and local knowledge — of the land, the ocean, the weather, the animals and more—are disappearing due to rapid social, climactic and economic changes.

“We use local and traditional knowledge as a dynamic concept. It’s changing all the time. And Inuit know it’s changing and they’re very keen observers of their own environment. So we’re trying to capture the perspectives of change and all aspects of change from the viewpoint of those most affected by it,” Taylor says.

“In an oral tradition, knowledge dies with the holder of the knowledge. We need to escape from our silos of specialization into more holistic views of realities not just in northern communities but in all communities and all science.”

It’s Nunaliit’s flexibility that makes it so special. It can handle multiple forms of data including video, audio, office documents, mapping documents and more.

The Inuit Siku [Sea Ice] Atlas for example, contains layers and layers of information about the ice around Baffin Island including translated interviews with hunters on the importance of sea ice for hunting and travelling and their observations on how the ice is changing, and why.

Sea ice data is not only critical for Inuit: local observations are valuable to researchers around the globe who study the earth’s changing ice, Taylor said.

Cindy Cowan, director of community and distance learning programs for Nunavut Arctic College, met Taylor through the Arctic Bay Atlas project. The college now uses Taylor’s cyber atlases to teach student and adult learners how to participate in external research or conduct their own research using Taylor’s software to bring the data together.

The atlases also help to make science less intimidating for adult learners, she adds, many of whom live in small communities, speak Inuktitut as a first language and didn’t graduate from high school. Inuit soon discover they can pursue topics they find relevant and useful.

“Many Inuit have been silenced, quite literally, from the early years of residential schools where they were not allowed to speak their language,” said Cowan.

“So their voice has been silenced and their knowledge has been suppressed because of how it’s communicated is orally and in their traditional language. There’s been a lot of misinformation because people truly don’t understand the culture. Maybe the researchers were well intentioned, I’m sure they were, but they were telling the world about Inuit without truly understanding them.”

These atlas projects, then, produce a power shift because they allow Inuit to switch roles from specimen to scientist.

“To my mind it’s a profound tool for reversing discrimination. Whose knowledge is privileged? Whose world view is privileged?” Cowan said. “There’s been colonizing relations between Canada and Inuit, between researchers from the South and those who have been researched, and I think we need to de-colonize that process.”

As an added bonus, the atlases appeal to youth who yearn for a connection to their elders and the past but who live in a digital world, Cowan adds. In building atlases of their communities, they can build bridges between those worlds.