“Many are telling their story for the first time” 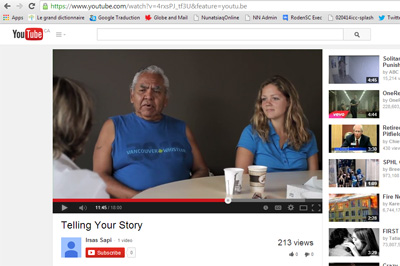 A new video prepared by the Indian Residential Schools Adjudication Secretariat explains the rights that claimants have under the IAP.

The Indian Residential Schools Adjudication Secretariat has released a new video to help claimants prepare for their hearing in the Independent Assessment Process.

“Telling Your Story” provides claimants in the Independent Assessment Process with information about what to expect at their IAP hearing, said Dan Shapiro, the IAP’s chief adjudicator, in a March 26 release.

IAP is a claimant-centred process that supports healing and reconciliation.

And most of the claims filed under the IAP are resolved through a hearing, where claimants recount their experiences at residential school.

The video explains that process to former students, providing information about where those hearings can be held and who can attend them.

“At the hearing, claimants recall and describe painful events,” Shapiro said in the release. “Many are telling their story for the first time [and] claimants often find the experience difficult and emotional. Telling Your Story will help them prepare for their hearing, and reduce the anxiety they may feel before their hearing.”

The video explains the rights that claimants have under the IAP, and discusses the roles and responsibilities of participants at the hearing.

Copies of the videos are also being distributed on DVD, which includes a 14-page booklet that provides an overview to the IAP.

Telling Your Story was first screened last week at the Alberta National Event of the Truth and Reconciliation held in Edmonton.

As of January 2014, IRSAS had received 37,922 applications for compensation under the IAP. Some 25,800 cases have been resolved and more than $2.275 billion has been paid out in compensation by the Canadian government.