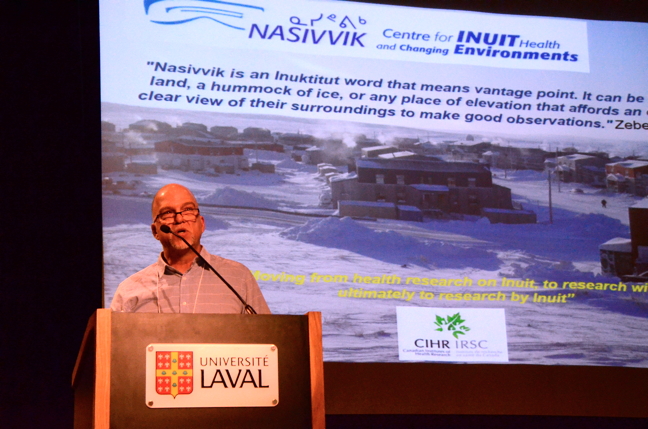 MONTREAL — The second edition of the massive Inuit health survey in Nunavik has been delayed.

That’s because the research icebreaker, the Canadian Coast Guard’s Amundsen, from which researchers collect data, is not available for August and September.

The organizers of the enormous survey—which checks the pulse of Nunavimmiut health in a variety of ways—needed more time.

But new details have emerged about the second edition, which has a slightly different name than the 2004 survey, changed from Qanuippitaa? (How are we?) to Qanuilirpitaa? (How are we now?).

“This one is larger,” Ayotte told a Quebec City crowd June 16 at the Northern Health Forum at Université Laval.

But one of the biggest parts of the study will involve a follow-up on those who participated in the 2004 survey—the largest ever health study on Nunavimmiut.

“That’s the best study design to conclude if [a] nutritional factor or environmental factor is linked to disease.”

The survey is designed to provide a portrait of the health status of people in Nunavik, which might better inform decision makers who decide where to put resources in Nunavik, Ayotte said.

Consultation was a priority this time around for Ayotte, with a focus on Inuit needs. Since January 2015, nine consultations with Nunavik communities and Inuit organizations have taken place, with more planned in the future.

And the Nunavik Nutrition and Health Committee, a consortium of representatives from various Inuit organizations, such as Makivik Corp., the Inuulitsivik Health Centre in Puvirnituq and Inuit Tapiriit Kanatami, oversees the research.

“This time around we started from scratch, discussing what would be the best survey in their perspective, and trying to meet our goals in having the best study,” Ayotte said.

“Together I think they have their own perspective of what their problems are. We’re coming from the outside with our researcher eyes and we’re trying to meet together to have the best design of the study.”

During his talk Ayotte said Inuit “own the data” and will “control all steps of the research.”

“It’s only good sense, if you’re performing a study or survey in the population, the data is coming from them,” he said.

Ayotte said he hopes that Inuit will conduct the survey in future studies.

“This program wants to help students look into research. To stimulate them, to pursue their studies beyond high schools,” Ayotte said.

And more youth are also going under the microscope, something that wasn’t done last time around.

A few other new components or “themes” highlighted by Ayotte include respiratory health, cardiovascular health, fitness tests, and diabetes.

“We added respiratory health because we obtained data to show that respiratory diseases are one of the biggest reasons for people leaving for hospital care in the South,” Ayotte said.

“There’s a lot of smokers and we expect that there’s quite a bit of pulmonary diseases both in youth and in older people.

“That’s something we didn’t address the first time,” he added, “and we’re convinced that’s a valuable theme to add to the survey.”

Consultation with Inuit also revealed that Nunavimmiut wanted their communities checked, too.

For that reason, researchers will also ask what makes a community thrive. Ayotte said the plan is to map out a community’s assets by making note of successful characteristics.

That means researchers will look at everything from sports programs to role models in the communities.

“We’re finding more healthy communities so that we’re able to find what are the important indicators of thriving communities,” Ayotte said.

The field work for the Qanuilirpitaa? Health Survey is now scheduled to unfold over 50 days from Aug. 8 to Sept. 26, 2017.

Research highlights — meaning the most important and immediate results from the survey — would probably come out in the fall of 2018, Ayotte said.