Nunavut review board decision on uranium mine “not what we expected,” Areva says

But Areva will go on with summer exploration work 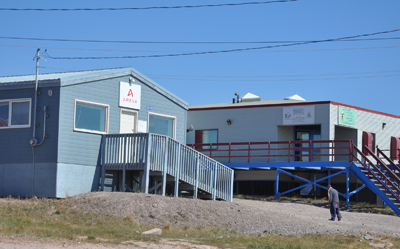 A resident of Bake Lake walks by AREVA Resources Canada’s local liaison office in the Kivalliq community. The NIRB said May 8 that it does not recommend that AREVA’s uranium project go ahead for the time being. (FILE PHOTO)

Areva Resources Canada Inc. says it is “disappointed” with the Nunavut Impact Review Board’s recommendation that the mining company’s uranium project not go ahead.

After almost six years of environmental assessment, the NIRB recommended May 8 that Areva Canada’s proposed Kiggavik mine, in exploration outside of Baker Lake, “should not proceed at this time.”

The NIRB decided that, because Areva cannot provided a definite schedule for the project’s launch, the board cannot do an accurate assessment of the project’s environmental and social impacts.

But Barry McCallum, manager of Nunavut affairs for Areva, said the company submitted what it believed was a “sound” final environmental impact statement.

“It’s not what we expected,” he said. “We were transparent in our plans to develop.”

The poor market conditions under which AREVA was developing its uranium project meant the mine’s timeline was never certain, although McCallum assured the project is part of the company’s plans.

“But we’re taking time to review [the final report] in detail, to understand their position,” McCallum told Nunatsiaq News.

In the meantime, Areva Resources has not made a decision about if and when it will re-submit its proposal, which includes four open pits and one underground operation about 80 kilometres west of Baker Lake.

“We haven’t decided on what course of action to take, if any,” McCallum said.

But Areva still plans to continue work on its advanced exploration project at the site this summer, and will employ between 25 and 30 staff doing drilling and other ground work over a period of about three months, McCallum said.

Overall, McCallum said Areva is happy with how the project’s hearings went and feels Nunavummiut received all the information they need to understand the proposal.

“We were confident with the lengthy process and various opportunities for input,” he said. “We appreciate all the input provided by the Kivalliq communities over the years, and we hope to continue to receive that input.”

Nunavummiut Makitagunarningit, or Makita, the Baker Lake-based anti-uranium group, said May 11 that it’s “overjoyed” at the NIRB decision, which it says reflects the region’s clear opposition to the project.

During the community roundtable portion of the NIRB’s final hearing into the uranium project, six of seven Kivalliq communities recommended the NIRB not approve the Kiggavik proposal.

Only one community, Arviat, was split, with one delegate supporting the project.

“Future generations of Inuit will view this decision as responsible and just,” said Makita spokesperson Hilu Tagoona, in a May 11 release.

“If Kiggavik had been approved at this time it would have resulted in induced development that would put considerable pressure on the caribou herds on which our culture and our well-being depend.”

Areva now awaits a response from Bernard Valcourt, the minister of Aboriginal Affairs and Northern Development, who received the recommendation from the NIRB. He has the power to accept the NIRB’s position, reject it, or ask the NIRB for a list of terms and conditions necessary for approval. Valcourt’s response could take months.