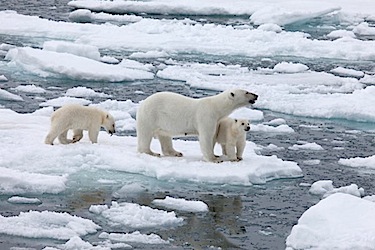 When the parties to the Convention on International Trade in Endangered Species of Fauna and Flora meet next month in Thailand to discuss which of the world’s species need additional protection from international trade, the CITES secretariat is urging them not to back a proposal by the United States to up-list the polar bear from Appendix II to Appendix I.

CITES Appendix II lists species that are not necessarily now threatened with extinction but that may become so unless trade is closely controlled.

A move to up-list polar bears to CITES Appendix I would put polar bears in a category reserved for the world’s most immediately endangered species like tigers, gorillas, jaguars, rhinos and panda bears, which are threatened with extinction. Such an up-listing would ban all international trade in polar bear products.

“Based on the available information at the time of writing (late January 2013), the Secretariat recommends that this proposal [to up-list the polar bear] be rejected,” the CITES secretariat said in a news release.

Governments will use the CITES evaluations and recommendations to make their own decisions about which proposals should be adopted and which rejected during the upcoming meeting, CITES said.

When they meet in Bangkok from March 3 to 14, representatives from 176 countries that signed on to CITES will consider 70 proposals from 55 states to increase or decrease controls on international trade in wildlife and wildlife products.

In total, about 320 species are affected by these proposed changes. In addition to the polar bear, the species involved include the African elephant, white rhinoceros, turtles, frogs, crocodiles, several shark species, the manta ray, valuable tropical timbers, ornamental and medicinal plants and many other animals and plants.

The proposal to up-list the polar bear marks the the second time the U.S. government has proposed to up-list polar bears. The first move was defeated in 2010.

In its decision not to support the recommendation to up-list the polar bear, the CITES secretariat said an Appendix I listing “would not appear to be a measure proportionate to the anticipated risk to the species at this time.”

CITES said the supporting statement from the U.S. “speaks more of potential population declines in the future, rather than declines that have already occurred.”

In support of its proposal, the U.S. said “a careful approach to the conservation of the polar bear is needed to ensure that primarily commercial trade does not compound the threat posed to the species by the loss of habitat.”

Transfer of the polar bears to Appendix I is a “keystone of this careful approach,” it said.

The U.S. cited scientific uncertainty in total population size and current trends of several sub-populations, the reduction in summer Arctic sea-ice extent, the vulnerability of the polar bears due to their low reproductive rate, and “the influence that commercialization of an increasingly rare species can have.”

Since May of 2008 when polar bears were listed as “threatened” under the Endangered Species Act, the U.S. Marine Mammal Protection Act automatically prohibited the importation of any polar bear parts or trophies for personal use from any part of Canada to the U.S.

The Government of Nunavut has previously said that it “stands in firm opposition to the proposal to up-list polar bears to Appendix I as a means to address the challenges associated with climate change.” Inuit Tapiriit Kanatami, the Inuit Circumpolar Council and the Greenland government have also lobbied against the up-listing.

But earlier this month, the European Parliament passed a resolution which calls for an international trade ban for polar bears and an up-listing at the meeting in Thailand.

The resolution urges the 27 members of the European Union to support “the transfer of polar bears (Ursus maritimus) from CITES Appendix II to Appendix I, as proposed by the USA and supported by the Russian Federation.”