No labels: It’s just Elisapie now, embracing it all 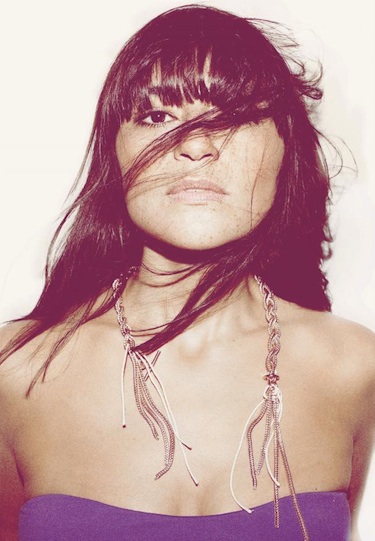 You can get to know the new Elisapie by listening to her recently-released album, “Traveling Love.” (HANDOUT PHOTO)

If you live in the North, you have many reasons to listen to Elisapie Isaac’s music: she’s Inuk, she comes from Nunavik and she often sings in Inuktitut.

But that’s too narrow a niche for Elisapie.

When you ask Elisapie who she is, she’ll tell you “I’m not pure.”

“I’m all of that,” she told Nunatsiaq News in a recent interview.

But despite her attachment to Montreal, which she says is a “great place for artists,” she decided not to put out a third album in French.

The lyrics to every song on her recently-released “Travelling Love” are written in English with a smattering of Inuktitut, unlike her previous two albums (the 2005 Juno- award winning “Taima,” with guitarist and composer Alain Auger , whose material was mostly in Inuktitut, and “There will be stars” in 2009, which also contained songs in French.

That move to English is “more of a surprise for Quebecers,” said Elisapie, who wrote her first song — in English — while in her teens.

At best, Elisapie is not easy to pigeon-hole.

And if you still think of Elisapie as Elisapie Isaac, now she’s known only as “Elisapie,” following in the tradition of female performers like Madonna or Adele who are known by first names only.

Elisapie says that makes sense for an Inuk singer, because first names are especially important to Inuit.

If you’re longing for the familiar Elisapie, you can hear her in the song “Salluit,” a ballad to spring and a testament to the homesickness for her community that strikes her every spring in Montreal. It’s “a soothing comforting song for me” in Montreal, where she says spring means shorts skirts and beer on the terrasse instead of watching for geese.

But “Travelling Love” has a different sound than her previous albums — more openly pop-rock.

“I needed to find myself and instinctively I knew it was going to be more dancing,” she said.

Elisapie said she didn’t want the album to be all “pop-y and girly,” so she aimed for what she calls an “empowering vibe.”

To understand what she means, listen to the title track, “Travelling Love,” which she says is about how “love cannot be owned: “it is something that is always moving, always flowing. That’s what I mean by ‘Travelling Love’.”

You can also hear a wiser and older Elisapie (now 34) in “Leaving you in Paris” (a track available only as part of the iTunes album).

In it, Elisapie sings “I need a different view away from you… looked for a shelter and fell into your arms but the lightning hit me hard… I’m leaving you in Paris… I know this time’s for real, ready for my heart to heal.”

The song is about “letting go of someone you’ve loved. Sometimes we have to acknowledge that,” says Elisapie, who split in 2011 from her longtime partner, actor Patrice Robitaille, with whom she has a six-year-old daughter, Lily.

In their reviews of “Travelling Love,” some music critics have focused on Elisapie’s admiration for the famed Montreal signer Leonard Cohen because the new album contains a new track called “[Leonard Cohen] It’s All Your Fault.”

But Elisapie says she’s more in love with Cohen’s world than inspired by his music “because his music is very different than mine.”

“I think it’s more the philosophy of life of an artist that I look up to more,” she said.

So, then who influences Elisapie’s music? It’s a varied bunch, including Bob Dylan, Neil Young, William Tagoona and the Salluit band, where she got her start as a 14-year-old.

For the new album, recorded under the label Pheromone Record/Vega Musique, Elisapie worked with the award-winning singer-songwriter Jim Corcoran, an Anglo-Quebecer best known for his French language albums, who co-wrote six tracks on the album.

Her producers, Éloi Painchaud and François Fontaine, gave her the freedom to do the music she wanted, Elisapie said.

This week Elisapie brings the new album to a major performers’ showcase in Montreal — the “M for Montréal.”

She’s also performing solo in other venues as well as touring with Ontario singer and songwriter Royal Wood, who’s bringing her in touch with new audiences across Canada who don’t know her or her music.

Many in those audiences first look at her as a singer from Quebec, says Elisapie. But at the end of her set, Elisapie lets them in on her “secret” — that she’s from Nunavik.

As for the future, Eliapie said she wants to produce more albums — quickly — and maybe make another film.

Her 2003 National Film Board of Canada documentary “If the Weather Permits,” which looked at the changing lifestyles of people in Nunavik, received several awards, including the Claude Jutra Award for best new director at the Rendez-vous du cinéma québécois, and the Rigoberta Menchu Prize at the First Peoples’ Festival.

It is included in the 2011 Inuit film anthology “Unikkausivut: Sharing Our Stories.”

Those varied plans add up to what Elisapie calls an “explosion of creativity.”

You can share in this on “Travelling Love,” now on sale in stores or on iTunes, where her single “The Love You Gave,” was a “single of the week” after the album’s Oct. 30 release.

You can also listen to some tracks Elisapie’s website.